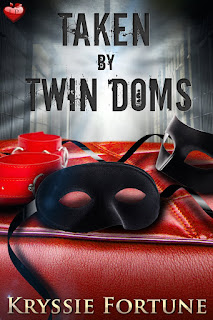 Who is that Masked Man
There’s something raffish about a man wearing a mask. Just think Zorro and you’ll see what I mean. He’s a man of mystery and power, willing to put his life on the line for what he believes.  The anonymity makes him sexier, but the way his eyes shine though touches ladies hearts.
Remember the Dread Pirate Roberts—alto ego of Westley in the Princess Bride. Okay, the film was a send up, but dressed in black, wearing a bandanna and mask over his eyes, he was the ultimate pastiche of sexy. He was strong and protective, whichever personna he adopted, even when battling R.O.U.S (Rodents of Unusual Size.).
Of course, some men in masks are tortured, just like Erik, the phantom of the opera. His mask disguises his deformed face. When he wears it, he has the confidence to woo Christine.
Why my interest in men in masks?
In my new release, Taken By Twin Doms, my heroes are powerful, respected men who’ve made a fortune designing computer games. Acknowledged as the best dungeon masters out there, they run a pleasure hotel, but they both feel something’s lacking. Maybe that something is Molly.
Tricked into kidnapping and dominating her without her consent, they hide their identities behind masks. They’re all about all sex appeal, dominance and caring for their sub. After tying up and tormenting Molly with sex toys and the make-believe threats they thought she wanted, they realize she’s an innocent trapped in their scene. She’s sassy and bright, but with submissive tendencies that thrill them. Now they want to keep her, but how can they after the wicked, sensual things they did to her in their dungeon?

One repressed heroine, twin Doms with sex toys, and a relationship based on a lie.


Too scared to step out of her comfort zone, Molly dreams of submitting to a powerful man’s will. When her cousin tricks her into visiting the Pearson twins’ Pleasure Hotel, she realizes she could play out her fantasies. Despite the sexual games going on around her, she still refuses to accept her sensual nature.
Steve and Brett Pearson want a sub with fire in her soul. Deceived by Molly’s cousin, they believe Molly craves a kidnap and interrogation scene where two men torment her with sex toys before taking her to sexual heights. They’ll stop the instant she says the safe word. As their reluctant prisoner, she has no idea what the safe word is.
After the way Molly responded to their dominance, the Pearson twins want to know her better. Can they win her heart after they’ve bound her, blindfolded her, and forced their BDSM games on her?

Reader Advisory: Contains scenes of forced seduction, twin Doms with sex toys, and a repressed heroine who was born to be wild.


Perched on the side of the bed, she tried to look on the bright side but finally decided there wasn’t one. Leaving before the rest of the hen party would only upset her family. Staying would be a … temptation. Overwhelmed by fantasies, she yearned for something she couldn’t define. Something Angela and the other girls in the hen party found so easy to accept. Then again, Molly had always been the girl who overthought things.

The various activities spelled out on that questionnaire sent a hormone surge through her blood. Cheeks and breasts scarlet, thoughts whirling as though caught up in a tornado, she wondered what sexual games the other hens had planned for tonight. Thoughts of letting a stranger explore her body, maybe even letting him spank her, consumed her. Afterward, they’d share sex so hot the bed sheets caught fire.

Just reading down the list left her hot and bothered, her body more sexually aware than it had been for months. Since no one else would ever see this form, she ticked bondage and multiple partners as acceptable. After all, this game just passed the time until dinner.

The back page demanded every detail of the fantasy she wanted to play out. For those lacking imagination, it even offered a few suggestions. Prancing around like a pony with a bit between her teeth and a butt plug holding a false tail in her ass didn’t appeal. Neither did rape fantasies or anything that reeked of medical.

A pre-dinner shower beckoned, but the way her body burned for sexual fulfillment, a cold one might be best. Stepping out of her panties, she widened her stance and circled her fingers around her clit, gradually increasing the pressure. She closed her eyes and imagined herself doing some of the things spelled out on that form. Her newly freed curls tumbled over her shoulders as she threw back her head and rubbed harder at her clit. Moisture flooded her pussy. After a final flick of her fingers, the sensitive nerves in her pussy overheated. She came hard and fast.

Now she really needed the shower. She couldn’t go down to dinner in a pleasure hotel smelling of sex. Almost, she turned the water to cold, but she chickened out and stepped under the hot water. As the shower glass fogged, she let the hotel’s orange-scented shower gel relax her. When she heard the room’s outer door slam, she shot from the shower and wrapped a towel around her bitty breasts. “Who’s there?”

Her voice echoed in the empty bedroom, but a maid had laid a change of clothes out on the bed. Another look showed her the porters hadn’t yet brought up her suitcase. Whoever laid out the black PVC catsuit had taken her jeans and T-shirt along with her underwear. Furious, she rang down to reception. “This is Molly Wade in room 407. Where are my clothes and what’s with the black outfit on my bed?”

A soft, feminine voice reassured her, “I’m sorry, Miss Wade. I thought you understood. Tonight’s our fancy dress gala. We pride ourselves on matching our outfits to your fantasies. I believe the maid laid yours out for you. Please be assured our staff will deliver your suitcase to your room while you enjoy your dinner.”

Refusing to be pacified, Molly almost hurled the phone at the wall. Instead, she snapped, “Then I’ll order room service rather than attend your fancy dress night.”

Again the voice sounded unruffled and professional. “I’m afraid that’s unavailable tonight. You need to check with your party leader, Miss Angela Hall, since we explained everything in the confirmation we sent her.”

Molly fumed. No clothes, not even underwear, no room service, and no option but to strut about in the sinfully sexy catsuit. Part of her cheered, but Angela had a lot to answer for.

Email ThisBlogThis!Share to TwitterShare to FacebookShare to Pinterest
Labels: @KryssieFortune