#Review - ONCE A RANCHER By Linda Lael Miller 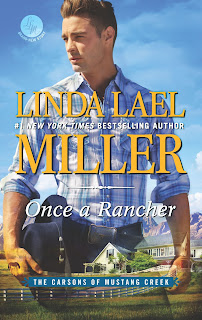 From Linda Lael Miller, the First Lady of the West, comes ONCE A RANCHER, the first book in her brand-new series, The Carsons of Mustang Creek. Set just outside the rugged Wyoming town of Mustang Creek, this gripping new trilogy features the sons of a prominent ranching family and the strong-willed women who are determined to show them what true grit really is.

When divorced and burned-out Seattle cop Grace Emery is given the chance to become the new manager of Bliss Creek Resort in the peaceful small town of Mustang Creek, Wyoming, she jumps at the opportunity to start fresh. She just doesn’t expect her teenage former stepson, Ryder, to be making the jump with her.

But when her ex-husband’s parents tell Grace that they’re finally out of their depth with their rebellious grandson, Grace finds herself accepting guardianship of the angry teen. Ryder may be a confused and lonely kid—neglected by his career-obsessed father and permanently disinterested mother—but now that Grace is responsible for him, she’s going to try everything in her power to set him on the straight and narrow. So when she learns that Ryder defaced a local film crew’s property, she insists he apologize to the studio’s owner in person…

As the oldest son of one of the most esteemed ranching families in Wyoming, Slater Carson is proud of everything he and his two brothers have achieved (even if they have been blessed with their family’s fortune). With their family ranch and winery prospering under his younger brothers’ stewardship, Slater has been afforded the chance to pursue his own passion—as a film producer of Western documentaries. Slater is still looking for inspiration for his next project when the captivating Grace Emery steps into his office.

Ever since moving to Mustang Creek, the Grace has gotten used to giving the town’s many eager cowboy suitors the brushoff. After all, a busy career woman with a demanding teen on her hands has enough to do without adding a rodeo Romeo to the mix. And after her experience with her alphamale ex-husband, she’s not interested in another conquering hotshot—even one as attractive as Slater Carson. But when a business venture draws them closer and closer together, she begins to see Slater in a new light.

Despite her initial wariness of Slater’s similarities to her ex, Grace soon discovers impressive differences that exist between them, as well—the importance of family and community to Slater, along with his respect for local history and love of the land. For the first time in her life, Grace starts to believe that love might actually be possible the second time around.

The go-to author for fans of Western Romance, Linda Lael Miller once more enchants readers with her engaging characters, authentic settings and gripping emotional romance. Her ability to combine high drama and humor makes for a memorable read!

Once a Rancher is the first book in yet another terrific series by the very talented Linda Lael Miller. I can not wait to get my hands on the next book in The Carsons of Mustang Creek series.

SLATER CARSON is one of those guys you just can't help but fall for from the beginning of the book. He's has a successful career in the film industry, he comes home to spend time with his family, his a great brother, a terrific son, a loving father, and he gets along well with the mother of his daughter. What is there not to love?

GRACE EMERY is one of the charters that I bonded with right away. She is an ex-police officer that is in need of a change of pace so she moves to Mustang Creek. She didn't count on moving her step-son, Ryder with her but is more than willing to take on the challenge. Things have been tough for Grace and her ex-husband is everything BUT a hands on father or husband. I admired Grace for not only loving her step son but for being the one parent in his life that is willing to stand by him, show him when he's doing wrong, and love him unconditionally.

Slater and Grace meet under interesting circumstances but the attraction is certainly there for both of them right away. Watching these two get to know each other and fan those flames in the process was quite enjoyable. I loved the interaction with Slater's family and that Slater is happy to step up to the plate and be a positive influence for Ryder.

Then there is the mystery and drama of things that keep going wrong for Grace. The danger and suspense kept me on the edge of my seat wondering how they were going to get to the bottom of the problems and what might happen next. I love how the people of Mustang Creek and the Carson family step up to help with the problem. I don't want to tell you too much because I sure would not want to spoil the story for you.

Overall I really enjoyed Once A Rancher. The characters are well written the story line is intriguing and entertaining, and there are hot cowboys. What more could a girl ask for in a story? I will be anxiously awaiting the next book in this series, Always a Cowboy.

You may find more of my reviews on Linda Lael Miller's work here. 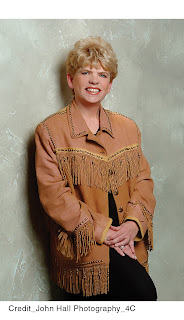 LINDA LAEL MILLER The daughter of a town marshal, Linda Lael Miller is a #1 New York Times and USA TODAY bestselling author of more than 100 historical and contemporary novels, most of which reflect her love of the West. Raised in Northport, Washington, the self-confessed barn goddess pursued her wanderlust, living in London and Arizona and traveling the world before returning to the state of her birth to settle down on a horse property outside Spokane.

Linda traces the beginning of her writing career to the day a Northport teacher told her that the stories she was writing were good, that she just might have a future in writing. Later, when she decided to write novels, she endured her share of rejection before she sold her first title to a publisher in 1983. Since then Linda has successfully published historicals, contemporaries, paranormals, mysteries and thrillers before coming home, in a literal sense, and concentrating on novels with a Western flavor. For her devotion to her craft, the Romance Writers of America awarded her their prestigious Nora Roberts Lifetime Achievement Award in 2007. Currently the Hallmark Movie Channel is developing a series based on Linda’s Big Sky Country novels.

For more information about Linda and her novels, please visit lindalaelmiller.com.