Voice for the Silent Fathers
by Eddie K. Wright


Eddie will be awarding a $20 Amazon or B/N GC to a randomly drawn winner via rafflecopter during the tour. Please use the Rafflecopter below to enter. Remember you may increase your chances of winning by visiting the other tour stops. You may find those locations here.

Crystal: Today I have the pleasure of hosting Eddie K. Wright. Welcome, Eddie! I'm so happy to have you here today.  Would you share a little bit about yourself with us today?

Eddie: My name is Eddie K. Wright, I'm currently serving my 14th year of a 45 year federal sentence, from entertaining a criminal mentality. After my first year in prison, I changed my life and began thinking and living from a spiritual perspective. The mind, body, spirit connection with God, understanding and teaching the Universal law has me known as the Gangster Turned Guru.  I'm the first father to ever write about coming to accept my son's homosexuality in "Voice for the Silent Fathers." I began writing 12 years ago, discovering another source of freedom when I pick up my pen.

Eddie:  One of my favorite scenes was when I took my son Drew to his best friends 6th birthday party at the local bowling alley. You would think it was Drew's party once we got there as he was always the center of attention. The event passed without any of the embarrassing moments I'd gotten used to being on the lookout for, with Drew coming out of his shell talking all girlish with feminine mannerisms.  All seemed safe as the party came to an end. The kids lined up to collect their party bags, blue for the boys and pink for the girls.  As Drew stepped up to request his bag, it seemed like the music stopped and everyone in the building paused as he said "Can I please have a pink one?"
I quickly kneeled down and said "Take a blue one Drew, it's for the boys. The pink is for girls."
He looked at me with the eyes of his bitter, resentful mother and said "But I want the pink one."
"But Drew...."
"Pink is my favorite color!!! I want the pink one!!"
A wave of heat convulsed through my body, while he shouted each word.  With defeated eyes, shaking my head I asked, "Could he please have a pink one?"
Of course they were all too happy to oblige. I couldn't wait to get him in the confines of the car as he skipped out the door singing "I got a pink one! I got a pink one!"

Eddie: I came up with the idea, alone in my cell when I decided I would write. I noticed the shocking reaction when I told others that my son was gay and that I accepted him for who he was. Discussing our difficulties and telling stories of how I came to love him, unconditionally were healthy for me. To share our personal story with the world could help others and that's what Voice for the Silent Fathers, will do.

Eddie: Currently I'm working on the final draft of "The Evolution of a Gangster Turned Guru," another memoir of the past 13 years detailing my transformation. There are spiritual self-help lessons on the Universal laws and principals to apply in life in order to experience peace and happiness regardless of your outer conditions.

Eddie: I always keep a fresh hot cup of black coffee nearby. I just get everything out in my first draft, I write about ten chapters and then go back to make an outline to help develop the shape and tone of the story. It's a little backwards but it works for me. Again....need that black coffee.

Crystal: Do you have to do a lot of research for this book or any other? If so do you have a fascinating fact that you have learned you would like to share with us?

Eddie:  I didn't have to do any research for "Voice for the Silent Fathers" because I'm the leading expert on the topic since it's based on my life experience.
But to share a quick story, I saw a book called "The History of Homosexuality" and mentioned to my friend Paradise that reading that book would probably give me some good insights. But that's not the type of book I was willing to order while doing time in one of America's most violent penitentiaries.  Everybody stands around the desk at mail call seeing who received what. That book would defiantly send the wrong message. But Paradise didn't care and ordered it under his name as a birthday gift to me.
When the book came, the prison was locked down due to a stabbing. Paradise tells the one known gay Officer to bring me the book.  When he came to my cell and passed the book through the food slot, he looked at me and asked "Are you trying to tell me something?"
I started to explain why, but just ignored him and laughed about it.
It turned out to be an interesting read and I really learned how common homosexuality has always been throughout the ages, especially in Rome and Greek societies.
I read it too long ago to state a fascinating fact, there were a few but I don't want to take a risk of mis-stating one. Unfortunately, after I read the book, I threw it away. Not because it wasn't a good read, but because of my current environment.

Eddie: I do enjoy reading the Science Fiction genre so would love to give a science fiction trilogy, but I would think you have to be a super smart, mathematical, scientific imagining being. Maybe in the future I'll give it a try.

Crystal: Thanks for visiting. It has been a pleasure having you visit today... Can you think of anything else you would like to share with us today?

Eddie: Thank you so much for having me and for the support.  Please enjoy "Voice for the Silent Fathers" when you have the chance.

In his memoir, Eddie shares his story of becoming a father at 18 years old who realized his son was showing ‘stereotypical’ signs of being gay while still in diapers. Spending most of his adult life engulfed in the street gangster/hip-hop culture where this subject was not only hushed but deeply frowned upon, he gives us the voice for what’s been kept silent for far too long, confronting almost every aspect of this taboo topic. It took years for him to silently accept his son’s homosexuality himself, regardless of all the signs. When his son was five years old, his favorite color was pink and there was nothing Dad could do about it. By the age of fourteen; he was an internet sensation, dancing on YouTube building his fan base to guarantee his success when performing as a drag queen a few years later. Eddie addresses the questions most are scared to ask; Was there anything I could do to stop my son’s homosexuality? When did I know my son was gay? What made him that way? Parents will find comfort in reading that Eddie admits that his son’s feminine behaviors embarrassed him and he seriously contemplated abandonment, a choice that too many fathers feel they have to choose.

He shares witnessing the desperation in the eyes of fathers, from all walks of life, who have pulled him aside, away from listening ears wanting to know the answers to these frequently asked questions, agonizing the possibilities that their son might be gay.


BUY LINK:
The Book will be FREE During the Tour at Smashwords
https://www.smashwords.com/books/view/614454

…” My son Drew was born September 20, 1990. I don't know if homosexuality is a biological or mental condition. I never thought Drew would grow up making the conscious decision to be gay, the way other kids were making plans to become firefighters, police officers, or doctors.

When I would ask him what he wanted to be when he grew up, he would tell me all the normal kid choices, he never straight out said, "Dad, I want to be a gay ballerina dancer!" However, as a father with a keen street intuition, I sensed something abnormal was having an effect on Drew.

At a very young age, he began displaying mannerisms similar to his mother. He started sucking his teeth and rolling his eyes. He would tilt his head and alter his voice to imitate a girlish tone and it would get on my nerves. This was happening when he was around four or five years old, and I avoided paying too much attention to those signs for fear of re-reinforcing those flamboyant behaviors.

Around others, especially the women in Drew’s life, I was depicted as "Mr. Macho”. I was the bad guy who was always "over-reacting" when I addressed and attempted to correct certain mannerisms that just couldn't be ignored.

My "Gaydar" was active watching all his behaviors for a "Gayness Alert!" which would make me rush in, like the heterosexual swat team, to stop whatever he was doing and make it more boyish.”… 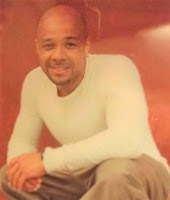 First time author Eddie K. Wright is a fitness trainer, Yoga instructor, spiritual motivational speaker and an inmate at a federal prison.  His personal transformation upon realizing the Universal laws and love of life, supports his conviction in his "Gangster to Guru" book series. The premier release "VOICE FOR THE SILENT FATHERS" details the struggle and inner conflict with being the parent of a homosexual child in the day, and a known connected gangster at night. Overcoming his "No son of mine" mentality, by realizing the true meaning of unconditional love wasn't easy, but his deep insight, heartfelt honesty, and 'laugh to keep from crying' attitude, makes for a humorous read for anyone touched by this issue which means it's for everyone!

Thoughts from a reader:
These delicate father son issues, so implicitly captured in Eddie's writings, are relevant to a broad spectrum of societal issues beyond the "No son of mine" father of a gay man experience.  In fact, the book gets to the real substance of human conflict which is our inability to accept and appreciate difference. The key word here is appreciation.  The book offers an opportunity to consider acceptance in a way that extends grace, honor, support and recognition.  When we are ungrateful, we are critical, blaming, and we use forms of rejection.  Eddie’s experience of coming to the acceptance of his son provides hope for healing; a more practical response to conflict that allows dignity, respect and honor which overcomes criticism, blame, bigotry, and ultimately rejection.  ~G. Holmes~

a Rafflecopter giveaway
Posted by Reviews By Crystal at 12:39 PM