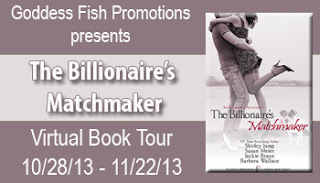 The authors will award a $25 Amazon GC to one randomly drawn commenter during the tour. Please be sure to leave a message below along with your email address so you may be contacted if you are the lucky winner. To increase your chances of winning stop by the other tour locations. You may find those locations here.... http://goddessfishpromotions.blogspot.com/2013/10/blurb-blitz-billionaires-matchmaker.html

Can a feisty four-legged matchmaker help four best friends find the romance of their dreams?

Driving Mr. Wrong Home by Shirley Jump: When a handsome man from Gabby’s past agrees to a cross-country road trip, her master plan to re-launch her art career quickly morphs into an unexpected, romantic reunion.

The Sheriff’s Secret by Susan Meier: Marney’s 9-1-1 emergency help arrives in the form of a rugged, blue-eyed cop. Now she has the perfect bodyguard to keep her safe during those dark, steamy nights…

Love Unleashed by Jackie Braun: The last thing Mia wants is a relationship…yet the headstrong florist can’t keep her hands off her sexy-as-sin ex-boyfriend.  Will she open her heart before he leaves town for good?

Love in the Shadows by Barbara Wallace: Jenny is a woman on a mission – she’ll even resort to dognapping to make her point! But can she teach a reclusive, emotionally-wounded tycoon that love heals all thing?

Damn, he looked good, with the dark hair she remembered, now a little longer and with a wave that swung across his forehead. She had the strangest urge to brush that hair back, to let her hands tangle in the locks, to draw him closer to her, to—

Instead, she talked, keeping her mouth busy with something other than T.J. “What’s with you and this adventure thing? You used to be the one I had to convince.”

He mouth quirked. “Do I detect a little surprise? At not being in control?”

“I can turn the tables on you so fast, your head will spin.”

He leaned back on the bench, crossed his arms over his chest, and smiled. “Oh yeah? I’d like to see you try.”

The challenge roared inside her, awakening the old Gabby. It spurred her to stand up slowly while T.J. watched the movement. Even in jeans, boots, and a thick winter coat, she knew how to shift her hips to draw his attention. His smile grew wider as she closed the distance between them, propped a hand on either side of him, then leaned in close, a breath away. She waited until his brows arched in surprise and his smile faltered, like in the old days, when he stuttered, unnerved by her in a miniskirt or a racy suggestion. Oh, she’d show him who was in control and maybe he’d stop trying to prove otherwise.

She brought her lips to his and whispered against his mouth. “The tables are turned, Mr. Shepherd. What are you going to do about it?”

“Turn them back in my favor.” He cupped her head and drew her closer.

New York Times and USA Today bestselling author Shirley Jump spends her days writing romance and women’s fiction to feed her shoe addiction and avoid cleaning the toilets. She cleverly finds writing time by feeding her kids junk food, allowing them to dress in the clothes they find on the floor and encouraging the dogs to double as vacuum cleaners. Look for her Sweet and Savory Romance series, including the USA Today bestselling book, THE BRIDE WORE CHOCOLATE, on Amazon and Nook, and the debut of her Sweetheart Club series for Berkley, starting with THE SWEETHEART BARGAIN in September 2013. Visit her website at www.shirleyjump.com or read recipes and life adventures at www.shirleyjump.blogspot.com.

Jackie Braun is the author of more than 30 contemporary romance novels.  She is a three-time RITA Award finalist, a four-time National Readers’ Choice Award finalist and was nominated for Series Storyteller of the Year by RT Book Club in 2008. She lives in Michigan with her husband, their two sons and a former shelter dog named Pip.

Anthology name and my title: The Billionaire’s Matchmaker/Love Unleashed.

Blogging 2 Tuesdays each month on The Chocolate Box: www.chocolateboxwriters.com

In 2013 Susan Meier lived one of her career-long dreams. Her book, THE TYCOON’S SECRET DAUGHER was a finalist for RWA’s highest honor, the Rita! The same year NANNY FOR THE MILLIONAIRE’S TWINS was a Book Buyer’s Best Award finalist and National Reader’s Choice finalist.

Susan is the author of over 50 books for Harlequin and Silhouette, Entangled Indulgence and one of Guideposts' Grace Chapel Inn series books, THE KINDNESS OF STRANGERS.

One of eleven kids, Susan never lacks for entertainment or amusement from her over thirty nieces and nephews. Her family’s Wednesday Morning Breakfasts are the highlight of her summer. And with lots of her nieces and nephews now in their twenties, wedding season is in full swing!

Barbara Wallace has been a life-long romantic and daydreamer so it’s not surprising she decided to become a writer at age eight.  However, it wasn’t until a co-worker handed her a romance novel that she knew where her stories belonged.  Her first Harlequin Romance debuted in November 2010.

Barbara loves writing sweet, smart, ‘it-could-happen-to-you’ style romances.  She lives in Massachusetts with her other loves – her husband, their teenage son, and three very spoiled pets (as if there could be any other kind).  She also loves hearing from readers.