BROKEN RESOLUTIONS By Olivia Dade LINE OF SCRIMMAGE By Desiree Holt LET ME BE THE ONE By Christa Maurice HER WINNING WAYS By J.M. Bronston 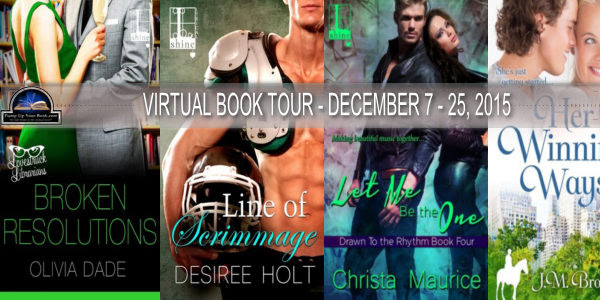 BROKEN RESOLUTIONS
By Olivia Dade
LINE OF SCRIMMAGE
By Desiree Holt
LET ME BE THE ONE
By Christa Maurice
HER WINNING WAYS
By  J.M. Bronston

About the Book:  BROKEN RESOLUTIONS By Olivia Dade

Love Between The Lines
Romance has never had a happy ending for librarian Penny Callahan, who could write the book on cheating, heartbreaking liars. So she’s made a resolution: no men for the next twelve months. If she can just get through the library’s New Year’s Eve singles night, she can return home to her pajamas and a good book. But when she finds herself checking out a hot hunk with an irresistible smile, an evening in the stacks becomes a lot more tempting…
Reclusive author Jack Williamson never should have trusted his mother. Even though he’s trying to avoid being recognized, she guilts him into attending a dating meet-and-greet—where an adorable librarian makes him question his lonely lifestyle. Is this just a fleeting, flirty scene? Or could love be the next chapter for them both?
Release Date: December 8, 2015
Publisher: Lyrical Shine
Genre: Contemporary RomanceFormat: Ebook
Book Links:
Amazon | B&N | iTunes | kobo | GoodReads

While I was growing up, my mother kept a stack of books hidden in her closet. She told me I couldn’t read them. So, naturally, whenever she left me alone for any length of time, I took them out and flipped through them. Those books raised quite a few questions in my prepubescent brain. Namely: 1) Why were there so many pirates? 2) Did women really get kidnapped that often? 3) Where did all the throbbing come from? 4) What was a “manhood”?5) And why did the hero and heroine seem overcome by images of waves and fireworks every few pages, especially after an episode of mysterious throbbing in the hero’s manhood?
Thirty or so years later, I have a few answers. 1) Because my mom apparently fancied pirates at that time. Now she hoards romances involving cowboys and babies. If a book cover features a shirtless man in a Stetson cradling an infant, her ovaries basically explode and her credit card emerges. I have a similar reaction to romances involving spinsters, governesses, and librarians. 2) Yes, at least in romantic suspense novels. And it’s still gloriously dramatic.3) His manhood. Also, her womanhood. 4) It’s his “hard length,” sometimes compared in terms of rigidity to iron. I prefer to use other names for it in my own writing. However, I am not picky when it comes to descriptions of iron-hard lengths. At least in romances. 5) Because explaining how an orgasm feels can prove difficult. Or maybe the couples all had sex on New Year’s Eve at Cancun.
During those thirty years, I accomplished a few things. I graduated from Wake Forest University and earned my M.A. in American History from the University of Wisconsin-Madison. I worked at a variety of jobs that required me to bury my bawdiness and potty mouth under a demure exterior: costumed interpreter at Colonial Williamsburg, high school teacher, and librarian. But I always, always read romances. Funny, filthy, sweet—it didn’t matter. I loved them all.
Now I’m writing my own romances with the encouragement of my husband and daughter. I found a kick-ass agent: Jessica Alvarez from Bookends, LLC. I have my own stack of books in my closet that I’d rather my daughter not read, at least not for a few years. I can swear whenever I want, except around said daughter. And I get to spend all day writing about love and iron-hard lengths.
So thank you, Mom, for perving so hard on pirates during my childhood. I owe you.

Sometimes it’s not about winning…
One bad tackle. That’s all it took to put wide receiver Jake Russell in a cast for the rest of the NFL season. From being a high school all-star to getting drafted by the Austin Mustangs, football has been Jake’s life for as long as he can remember. It’s what defines him—because he has a secret he never shares. But now that he’s laid up in bed with a nurse displaying a lot of distracting bedside manners, he’s discovering life on the sidelines might have its perks. . .
One last paycheck. That’s all Erin Bass has left to her name when the resort she works at shuts down. Desperate, she agrees to be a caregiver to hardass jock Jake Russell, who also happens to be a memorable one-night stand. Before long, caring leads to daring new ways to catch up in bed, especially with Jake still in a cast. But with football on the sidelines, this time the game is serious. . .
Release Date: December 8, 2015Publisher: Lyrical ShineGenre: Contemporary RomanceFormat: Ebook
Book Links:
Amazon | B&N | iBook | kobo |Goodreads

Known to the world as the oldest author of erotic romance, Desiree Holt proves every day that she is more than the sum of her years. She is a winner of the EPIC E-Book Award, an Authors After Dark Author of the Year and winner of the Holt Medallion. She has been featured on CBS Sunday Morning and in The Village Voice, The Daily Beast, USA Today, The Wall Street Journal, The London Daily Mail and numerous other national and international publications. She enjoys football and reading and her three cats, who are her constant writing companions.
“Get out the ice water and fan…Desiree Holt delivers smoking hot alpha heroes and red hot romances.” — Lea Franczak, USA Today Happy Ever After blog

A little matchmaking mischief…
She’s the girl of his dreams, but she belongs to another man. Still, that doesn’t stop rock star Brian Ellis from standing by Suzi’s side when she needs him most. Or offering her a strong shoulder to lean on when her relationship crashes and burns. But will Brian get burned by the beautiful writer when Suzi goes back to the man she believes she loves?
Suzi has always had a crush on Brian, which doesn’t mean she’s ready to risk everything for the sake of a fling. Yet the more time she spends with him, helping the sexy single dad with his kids, she knows there’s more between them than simmering sensual tension. An invitation to join him in the sweet mountain town of Potterville, West Virginia, may be too tempting to resist. But how can Suzi give her heart when she’s already promised herself to another?
Release Date: December 8, 2015
Publisher: Lyrical ShineGenre: Contemporary RomanceFormat: Ebook
Book Links:
Amazon | B&N | iBook | kobo | Goodreads

Meet the Author:
Christa Maurice has been obsessed with rock stars from early childhood when her older brother started randomly quizzing her on rock trivia. How many first graders know who the headliners were on the Black and Blue Tour? Christa did. (Black Sabbath and Blue Oyster Cult.) When not listening to music and/or writing, she enjoys traveling, reading and science fiction. Waiting for a Girl Like You is the third book in her Drawn to the Rhythm Romance series.

GRAND PRIZE: $50,000 shopping spree for two in New York. Includes makeover, photo shoot with Lady Fair magazine…and a shot at happily ever after.
As a college librarian in Wyoming, shushing students and tending the family cattle ranch is about the most excitement Annie Cornell can count on. So when Annie wins an all-expenses-paid shopping spree at a high-end department store in New York City, she’s thrilled to trade wide-open spaces for fast-paced Fifth Avenue. But she never expected to be swept off her feet—least of all by an overconfident, horse-mounted police officer…
Sergeant Bart Hardin is instantly attracted to Annie. He’s not sure if it’s the way she handles his trusty horse or the way those angelic hazel eyes held his gaze during that rowdy protest outside the UN. Whatever it is, Bart quickly learns that this clueless tourist in need of his protection can handle herself just fine—in fact, she might just teach him a thing or two on these mean Manhattan streets…
Release Date: December 8, 2015
Publisher: Lyrical ShineGenre: Contemporary RomanceFormat: Ebook

Joan Myra Bronston grew up in New York City, married her college sweetheart, and went with him to Germany for a year while he was in the Army and where she worked as a telex operator and mail clerk. They then moved to Austria where Joan spent five years teaching at an international school. She is the mother of three wonderful girls and the grandmother of a super-wonderful grandson. Joan was also a secretary, social investigator, and psychiatric researcher, before entering law school and eventually becoming a corporate attorney. In addition to her years in Europe, Joan has lived in Pittsburgh, Chicago, and, for 18 years, Salt Lake City. At last, she has closed the circle and returned to her first and most beloved – New York City.

Posted by Reviews By Crystal at 1:10 AM