#ReleaseDay - Susana and the Scott By Sabrina York 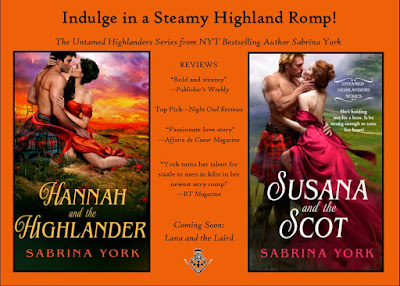 Susana and the Scott
Untamed Highlanders Series
By Sabrina York

Bestselling author Sabrina York carries readers back to the wild Scottish Highlands, where the bravest of men surrender to no one-except the boldest of women...

A SCANDALOUS TEMPTATION
Andrew Lochlannach is famous for his conquests, on and off the battlefield. When a fellow warrior challenges him to a kissing contest, he wastes no time in planting his lips on ninety-nine lovely lasses-an impressive feat of seduction that gets him banished to the hinterlands. Still, Andrew has no regrets about his exploits-especially his embrace with the most beguiling woman he's ever met...

AN UNDENIABLE PASSION
With flaming red hair and a temper to match, Susana is not some innocent farm girl who gives herself over easily to a man, even one as ruggedly handsome as Andrew. The wicked Scot may have won a kiss from the headstrong beauty in a moment of mutual desire, but Susana refuses to be just another one of his conquests. Andrew must convince the fiery lass that even though he is not playing a game, losing her is not an option...

"You can't go wrong with a Sabrina York story."-Desiree Holt

**Note From Crystal ^ Desiree Holt is oh so RIGHT! I have read this fabulous book and LOVED it. Stay Tuned for my review soon!

Susana was annoyed. There was no doubt about it. The swish of her hips as she led him across the bustling bailey was a dead giveaway, that and the dark glowers she shot over her shoulder. But Andrew couldn’t help but be amused. For one thing, she was damn alluring with she was annoyed.
Hell, she was damn alluring altogether. The curve of her waist alone could drive a man insane, much less that silky tumble of hair. He wanted to wrap it is his fist, wind it around his body. A certain part of his body.
At the thought, his cock rose.
It was difficult to remind himself that he’d vowed to eschew seduction, but try as he might, he couldn’t banish the fantasy of stripping those breeks from her lovely body and laying her down in the heather. Visions of that twitching backside—bare before him—danced in his head.
But he’d made a vow. A sacred vow. And as tempting as she was, he would control his baser urges. He could. Probably.
These thoughts whirled in his head as she led him into the stables, past his men—who were unpacking and seeing to their horses—and through the kennels. Though he was perplexed, Andrew followed. He would probably follow anywhere she led. It was a fact that should have scared him to death or at the very least, concerned him. But it didn’t. However, when she started up a staircase at the very end of the long hall, he had to stop her.
She glared at the hand he set on her arm. He tried to ignore the sizzle that raged through him at their first touch. It was ridiculous how much that touch affected him. And how much he enjoyed her glare.
He edged closer. “Where are we going?” he asked in a purr.
Judging from her frown, his tone irritated her. He rather enjoyed irritating her, he found.
She ripped her arm away and continued up the stairs. He followed and found himself in a narrow loft that ran the length of the kennels. It was dim and a little dusty. Motes danced on the air. The roof was so low he had to duck his head to miss the rafters.
“Your men will stay here,” she said.
Andrew gaped at her. The room was swept clean and empty. A thin shaft of light from the far window illuminated it with a murky light. But the yipping from the kennel and the stench of excrement wafted up from below. For some reason, all thoughts of alluring backsides dissipated. Disbelief gushed through him. “Here?”
She crossed her arms and offered what could only be described as a smirk. “Here.”
He tipped his head to the side. “This is a kennel.”
“I am aware of that.”
“I have twenty-five men.”
“The room is quite large.”
“There are no beds.”
She blew out a breath. “We’ll bring in pallets.”
Andrew blinked. He set his teeth and tried to remain calm. His men were warriors. They did not sleep on pallets. In a kennel. “This will not do.” Surely she saw that. Surely she understood… He caught a glimpse of her smug expression and it dawned on him.
She did. She did understand. She knew damn well what she was doing. Her response only verified his suspicions.
“I’m sorry, but you have descended upon us with no warning whatsoever with a large group of men. I’m afraid this is all we can offer you at this time.” Her smile was deferential, but hardly sincere. The light dancing in her eyes lit a flame in his belly. “Of course, if our accommodations are unacceptable, you can always return to Dunnet…”
Oh, she’d like that, wouldn’t she?
The minx.
Rather than the exasperation her self-satisfied look should have sparked, Andrew found himself filled with another emotion entirely. Anticipation. Exhilaration. The thrill of a challenge.
For that was what she was, Susana Dounreay. A challenge.
And it appeared she reveled in provoking him.
A pity she didn’t understand he was a dangerous man to provoke.
The tumult her presence sparked within him flared again, burning the edges of his resolution; his inconvenient lust blossomed, and with it, an unruly resolve.
He wanted, very badly, to kiss her.  He wanted to wrench her into his arms and cover her sweet mouth with his. He wanted to taste her, consume her, possess her.
And he would.
Clearly he wasn’t the kind of man who could swear off women. Clearly he wasn’t the kind of man who could keep a vow.
So be it.
Damn to hell his ridiculous vow.
Damn to hell the fact that she was his sister-in-law.
He was going to seduce this vixen, and he would start right now.
Desire, like a snarling, snapping beast, rose within him, and he stepped closer.

~*~*~*~*~*~
WHAT PEOPLE ARE SAYING ABOUT SABRINA YORK’S UNTAMED HIGHLANDERS

Hannah and the Highlander  ( My Review)

Lana and the Laird—Coming in 2016Want More Highlanders by Sabrina York?

Laird of Her Heart -Highlander Time Travel (My Review) 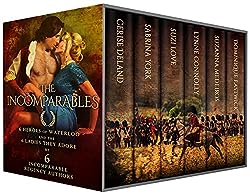 Her Royal Hotness, Sabrina York, is the New York Times and USA Today Bestselling author of hot, humorous stories for smart and sexy readers. Her titles range from sweet & sexy to scorching romance.  Visit her webpage at www.sabrinayork.com to check out her books, excerpts and contests. Get updates and alerts from Sabrina here: HotSheet Sign Up.

Join the conversation on Facebook: https://www.facebook.com/groups/SabrinaYorkChatAndContests/
Posted by Reviews By Crystal at 1:30 AM