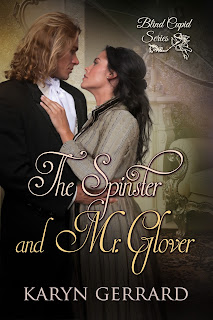 His male beauty moved her. His vulnerability touched her. His past horrified her...

Anne Sommer, a spinster firmly on the shelf, does the unthinkable. She hires a man from the Blind Cupid brothel for a night of scandalous pleasure. Anne wants the sensual memories to keep her company in
the lonely years ahead. However, she did not expect the young man to move her in ways she never imagined.

Desmond Glover gives sexual gratification—for a price. An orphan whose childhood was mired in scandal and poverty, Desmond has learned to close off his emotions with regard to his occupation. He did not
count on a lonely spinster to awaken his hidden passion.

Not only do the years separate them, but so do their social standing. Can Anne and Desmond cross such a chasm and find mutual desire—or love?

This is book one of the Blind Cupid series.
Book two is The Governess and the Beast.
Book three is The Copper and the Madam.

“Miss Sommer? I am Desmond Glover.
I believe we have an engagement.” His speech possessed a deep, husky cadence
and every syllable rounded and well-modulated, as if he’d been trained to speak
as a gentleman. Handsome did not seem adequate enough to describe his
astounding countenance. The prospect of sending him away with a flea in his ear
and ten pounds in his satchel no longer appealed. The man was stunning, absolute
masculine perfection. No. She would not dismiss him. This opportunity should
not be tossed aside so cavalierly. Never had a man’s good looks caused her to
act in a rash manner. First time for
everything. She stepped back. “Please, do come in, Mr. Glover.”
After offering to take his hat and
long cloak, she hung them on the hall tree.  Stealing a glance, she marveled at his
stunning profile. How appealing. With a quick nod, he followed her into the
parlor. Inhaling, she could make out his scent which consisted of a light
fragrance of bay rum and clean linen. There was no denying his thoroughly male presence
as it dominated the room. “Please, take a seat. Would you care for a cup of tea?”
she asked politely.
How prim, proper, and well-mannered
she sounded, considering her nerves were in knots. She picked up the pot with
both hands to stem the shaking. With a quick flick of his suit coat, he sat
across from her, and with slow purpose removed his leather gloves. “Very well.
Milk, no sugar.”
Anne added the milk then poured,
and passed him the cup which rattled slightly on the saucer from her trembling grasp.
As Mr. Glover took the tea, one of his long fingers brushed hers and he stroked
it intimately before moving away. Rolling, raw heat traveled up her arm from
the innocent touch or perhaps the deliberate contact was all part of his game
of seduction.
Taking a sip of the beverage, Anne
stole another glance at her visitor over the top of the cup. His hair shone as
gold as the bright morning sun, the curling locks touching his broad shoulders.
How scandalous, far too long for the fashion. How pleasing to discover he was clean-shaven
when most men of a certain age wore facial hair or those silly sideburns. Better
to show off his prominent cheekbones and well-formed jawline, she mused. The shade
of his eyes was similar to the color of a snifter of warmed brandy, his gaze
mesmerizing. However, she read no real warmth there, only a cool detachment.
Not boredom as such, but a disturbing lack of emotion.
He crossed his long legs. “Perhaps
we should discuss terms. I am here for two hours. The carriage driver will then
return and if I am not out within five minutes, he will depart and return in
another two hours and the cost will rise in accordance with the stipulations
the abbess relayed to you. If you would be so kind as to pay in advance for the
first block of time?”
Anne blushed, reached for her
reticule, and slid a handful of pound notes across the table.
“Excellent. If you wish for us to
sit and drink tea for this period, I can oblige you. However, I am here for
more carnal pleasures. Do you wish to begin?”

~*~*~*~*~*~
Here's the dirt. This was originally called The Blind Cupid, a short story for Decadent Publishing's The Edge line where the story had to be hot and no more than 7000 words. It was released December 2012. It is now called THE SPINSTER AND MR. GLOVER, self-pubbed, and the story is now 14,995 words. I also dialed back the heat a notch or two. I also expanded the plot and characters.


I have written more than a few stories about a couple caught in strange circumstances and falling in love during a short period of time, but the situation fascinates me. Two unlikely people, alone, emotions are intense, desire even more so. Yes, they fall in love quickly, but isn't a lot of romance based in fantasy? Besides, though rare, people in real life can fall in love at first sight, so why not my hero and heroine? :)  Hope you enjoy!

Hiding secrets and a past she longs to forget, Hortense Jennings answers an ad for a governess and embarks on an adventure she did not expect.

Concealed in a gothic, crumbling manor on the edge of a North Sea cliff, Baron Simon Wolstenholme is hiding from life. Horribly scarred from battle wounds, he lives up to his name “The Beast of Stonecliff” in both appearance and attitude until he realizes how lonely he has become.

Simon propositions Hortense for a singular night of passion. Raging weather and storms of anger clash between a lonely man and a distrustful woman to reveal secret desires in an emotional crescendo. Can the Governess and the Beast find calm amid the storm and admit their true feelings, or will pride destroy the fairy tale before it begins?

In 1897 London, Scotland Yard Detective Sergeant Rory Kerrigan never expected to find love among the crime-ridden streets he vowed to protect. Kerrigan, a man with a wretched past and hardened heart, keeps emotion from his life and its interference with his police work.

Abbess Rea is owner of the brothel, The Blind Cupid, and a woman with a secret and desolate past of her own. Rubenesque and leery of men, Rea lets no one close. Yet, she cannot deny the ruggedly handsome Rory touches her heart.

A grisly murder on Kerrigan’s turf has Rory and Rea teaming up to bring the killer to justice. As danger lurks closer, secrets are revealed and passion is ignited. Will the copper and the madam acknowledge their mutual yearning even at the peril of their lives?

Karyn lives in a small town in the western corner of Ontario, Canada. She whiles away her spare time writing and reading romance while drinking copious amounts of Earl Grey tea. A multi-published author with a few bestsellers under her belt, Karyn loves to write historicals, particularly in the Victorian era. She also writes the occasional contemporary. Tortured heroes are a must.

As long as she can avoid being hit by a runaway moose in her wilderness paradise she assumes everything is golden.

Karyn’s been happily married for a long time to her own hero. His encouragement keeps her moving forward.

Karyn's Site/Facebook/Twitter/Pinterest/Amazon Page
Posted by Reviews By Crystal at 2:12 AM