Crystal: Today I have the pleasure of hosting Sarai Henderson. Welcome Sarai! I'm so thrilled to have you here today. Would you share a little bit about yourself with us today?

Sarai: My name is Sarai. It’s the name my Grandfather gave me so it’s special to me. I live in Oregon with my husband and three boys. One has autism and one has severe ADHD.  It’s a little Chaotic, but we love spending time outdoors.

Sarai: Right now I’m working on the sequel to Hunter. I write on my lunch break, so it’s a little slow going, but I’ll get there.

Sarai: I was driving to who knows where and the person in front of me was going way under the speed limit. I thought to myself, “wouldn’t it be nice if I could project my voice into their head and make them move?” And so Hunter was born.

Sarai: I usually write during lunch, so I’m always eating. Usually it’s a Teriyaki bowl from across the street.

Sarai: This is one of my favorite scenes. My main character, Hunter is chasing down her mark through a fish market in Seattle. The woman is based off of my best friend. I’m not saying I have pent up anger toward her, I just know that out of all my friends, she can handle it the best.

My hand slowly moved for the taser I had hidden in the belt of my jeans. Fifty thousand volts of electricity to jumble Dawn’s thoughts and incapacitate her just long enough for me to get the cuffs around her scrawny little wrists. With one quick movement my hand jerked in front of me, the stun gun pointed at the mark, ready for the take down. Who needed backup anyway?

The second before I pulled the trigger, Dawn pushed me in the chest as hard as she could. I stumbled back, colliding with several bystanders and a fish cart. The slimy creatures tumbled all over the ground around me as I struggled to free myself from the entanglement of people I had been caught up in. “Damn it!”
Dawn had already been swallowed up by the crowd, but I didn’t need my sight to find her. The frightened inner monologue screamed loudly with many profanities that should never be repeated in good company. It would be easy enough to track and it was moving away from me quickly. My heart beat faster as my hunting instinct picked up her trail.

Sarai: I’m all about DIY. My bathroom is full of natural wood from our back yard. We made towel racks, shelves and a really cool toothbrush holder. I also love gardening. This is our first year trying to grow anything and I’ve already got pumpkins, tomatoes and bell peppers.

Sarai: I have to play music. Usually I pick something that matches the mood of the scene I’m writing. The louder the better.

Sarai: Thanks for having me. I hope everyone enjoys HUNTER as much as I’ve enjoyed writing it.

Sixteen-year-old Hunter belongs to the Telepathic Alliance for the Latent or Newly manifested, otherwise known as


Talon, a bounty hunter community known for their ruthless tactics. Her latest mission in San Diego was supposed to be a piece of cake, but when the job takes a treacherous and deadly turn, not even her telepathic abilities could have
warned her of the dangers lurking around the corner.


There is only one place for Hunter to go, and that is straight into the hands of the government and their Psychic


Intelligence Team, but even the “normal” world isn’t safe. With each passing hour throwing her deeper into the game of life and death, Hunter must decide who to trust before this mission becomes her last.


Excerpt:
14+ due to adult situations

I pulled my
hood up over my head as the rain began to pour from the skies and bounce off
the sidewalk in a serene rhythm. My hands were shaking from the adrenaline that
surged through my body. The hunt never got old. “All right, Bear. I’m in
pursuit of the mark. Get ready.”
“About time,
slow poke.” He chuckled to himself, but I wasn’t amused. Dawn had put me in a
bad mood and it would take a while for it to wear off. If only he was close
enough to punch, maybe I would feel better.
The sidewalk
turned a corner sending me into a crowded marketplace where the people bumped
shoulders more often than not. The smell of fish hit me like a ton of bricks
making me crinkle my nose in disgust. There was nothing I hated more than
seafood. Well, maybe large cities with all the loud voices in my head, but fish
was a close second.
I dug my
hands deep into my jeans pockets to keep them from shaking. Anxiety from
listening to the varied streams of consciousness coursed through my body. I had
to concentrate.
Dawn’s
presence was moving closer through the crowd, I could feel it. Her thoughts
told me that she didn’t like fish much either but this was where her contact
had told her to meet him. My heart skipped a beat with the mention of another
person around, possibly a telepath. Great, we didn’t have much time.
“Bear,” I
shouted into the com. “She’s here to meet someone and it sounds like they’re
going to send her into hiding. I need you close by. This is happening now.” 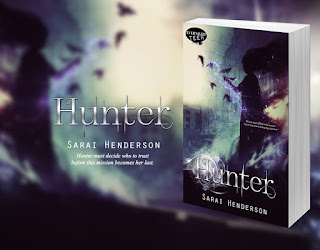 Sarai Henderson is a retired ballerina from Oregon City, Oregon, where she spends most her time chasing down her three rambunctious boys and writing on her lunch break at work.

She enjoys DIY projects, Photography and writing on her blog about life as a mother of an autistic son.