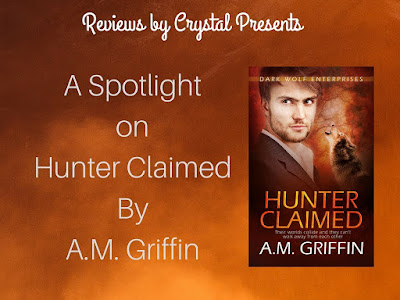 A.M. Griffin is giving away a $20 Amazon Gift card during the tour. Please use the RaffleCopter below to enter.

When Hunter and Asha’s worlds collide, neither is able to walk away from the other.

Asha has a simple plan for her life—her hopefully soon-to-be immortal life. All she’s ever wanted was to be so powerful that no one could ever hurt her again, and once she becomes a Vampire her dream will come true. Sure, being a Vampire’s protégé isn’t the easiest job a girl could have, but there are far tougher roads she could be walking, like following in her drug-addicted mother’s footsteps.

Hunter Arany hates Vampires, and with good reason. So when Dark Wolf Enterprises is forced to hire a group of the blood-suckers to find out who’s been stealing company money, he’s sure having them around will be a problem. He never figured it would the Vampires’ human servant who causes him the most trouble—trouble of the love and life-mate kind.

He’s hoping to convince Asha a brighter future exists in his arms, but old dreams fade slowly and can become living nightmares—of the dying kind.

“You almost got me killed,” she announced.
He turned away from one of the screens he watched to frown at her. “Huh?”
“Stepping between me and Clarissa yesterday then leaving paw prints all over the property. I know it was you.”
He leaned back in his chair and watched her. “I wanted to make sure you were okay. And you shouldn’t be upset that I stopped a mad Vampire from breaking the rest of your fingers.”
Ash narrowed her eyes. “You don’t understand how Vampires work,” she bit out.
“I know plenty, which is why you shouldn’t be anywhere near them. You’re human.”
She lifted her chin. “I can handle myself.”
He glanced at her injured hand. “Right.”
She stabbed the air with her finger. “You think you know everything, but you don’t. No one is making me stay with them. I’m with them because I want to—”
“Be one of them.”
She could feel her temperature rising. “And what’s so bad about that?”
“Nothing if you enjoy feeding off blood.”
“It’s a necessity.”
Hunter got up and crossed the short distance between them. He put a hand on the side of her head and tilted it to view her neck. “No bite marks.” He sounded surprised.
She pulled out of his grasp and stepped away until her back hit the door. “They don’t bite me there.” She knew it was the wrong thing to say as soon as the words left her lips.
He stepped up to her. Their bodies were almost touching. “Where do they bite you, Ash?” he asked in a low voice.
She couldn’t find the words to say anything. He smelled so good—outdoorsy and fresh. She breathed in deeper, filling her lungs with the scent of man.
He lifted her hand and turned over her wrist. “Do they bite you here?”
She didn’t like to be touched. She hated it. But she welcomed his hands on her skin. She wanted him to touch her more. “S-sometimes.”
He ran his fingers up to the soft side of her elbow. Heat erupted on her skin in their wake. “How about here?”
She shook her head and her messenger bag dropped from her hand. He went to her hip and she inhaled a sharp breath at the tingling sensation that he caused.
He used his hand to travel down her hip and stopped at the juncture of her groin. “Here?”
“Y-yes.”
“You have to hand it to them,” he said, his voice deep and raspy. “They know where the liquid is…sweetest.”
Air caught in her throat. Hunter leaned down and captured her mouth with his. The prickly hairs on his upper lip and chin grazed across her face. He was all man, yet feral and predatory at the same time. He used his tongue to part her lips and delved inside. She was hesitant at first, unsure what to do or how to kiss him. But it didn’t take long before instinct took over and she explored his mouth just as much as he did hers and met his tongue with the same ferocity he displayed.
He reached around and palmed her butt, squeezing and kneading her onto him. His hardness was against her belly in the most delightful way. He gripped and lifted her off her feet. Using the door to steady her, Hunter urged her to wrap her legs around his waist. With their mouths locked together, he walked her over to the table and sat her on the edge.
She didn’t care about the compromising position. All that mattered was how his muscles felt under her hands. She explored him, caressing his face, neck, arms and back. She wanted more. She longed for him.
He pressed his hips between her legs and she shuddered. Only the thin barrier of her panties separated his cock from her. Little moans escaped her mouth as he moved, grinding on her clit. She let her hands roam across his lower back, urging him on. With fervor, he kissed her, and deep moans came from his throat. Her stomach knotted at hearing his pleasure in her ears. 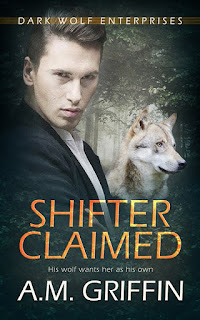 The big break Trudy Hollander’s small accounting firm needs has finally arrived, but unfortunately it comes with murder, mayhem and Kristof Farkas, a man she just can’t seem to resist. Even worse, Kristof is the CFO of Dark Wolf Enterprises—the one person who can pull the plug on the job that will take her company to the next level.
Then there are the assassins who can jump from three stories up and still be able to run away…
Kristof has no intention of giving in to his inner wolf and claiming Trudy. She’s human. Too fragile to withstand being a shifter’s mate. But the need to protect her is stronger than his resolve, and his desire is more powerful yet. He’ll fight with everything he has to keep her safe, both from those who would hurt her, and from himself. 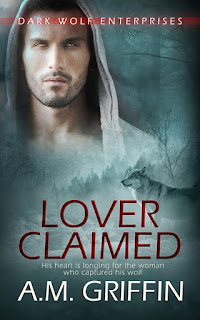 When Meisha comes home and finds a strange man in her kitchen, she does what any sensible person would do. She beats the crap out of him first, then asks questions after. When he explains her best friend is in mortal danger, Meisha knows the whole mess—including a recent murder and the threats on her friend’s life—may be her fault, and she’s determined to get to the bottom of it. And no sexy stranger is going to stop her.

Lajos Farkas isn’t expecting to meet a spitfire, martial artist when he’s on a mission to figure out who’s stealing from Dark Wolf Enterprises, and he certainly doesn’t expect her to insist on butting in on his investigation. But getting rid of Meisha is seemingly impossible, and when his wolf decides she’s his life-mate, suddenly he realizes he’ll do anything to keep her close and grow old with her.

If they can just stay alive long enough to make that possible.

Where you can find me:

a Rafflecopter giveaway
Posted by Reviews By Crystal at 3:38 AM