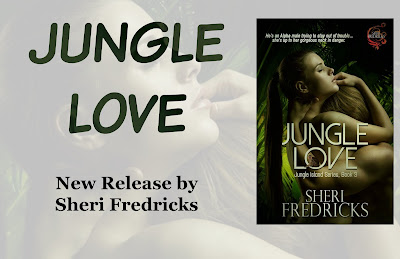 Return to the uninhabited world on Jungle Island…

Life should be sweet, but for Tarzan things have gone sour. No matter how hard he tries, when something goes wrong it’s always his fault—like the challenger who wants the Alpha Female position. And Jane isn’t happy about it.

Jane survived a pirate attack and being shipwrecked on a jungle island. Life is tough in the wilds, but how does one survive heartache and homesickness—or the suspicions the mind conjures up. Courage is made, and relationships strengthened, when two people share a sweet Jungle Love.

The flying threat was not a gift, as the grinning ape suggested. Coral’s arrogant smile of fake gratitude could be interpreted as a danger to his woman.

Protectiveness swelled in him like the creek after the rain. The feeling grew, filled his chest, and spilled over until a river flowed. Tarzan was not attracted to the gorilla offering herself in the nearby tree, and he needed to be sure she knew as well.


He stroked his weakened male part as he thought his problem over.

Perhaps there was another way for Coral to understand. He looked at his mate’s rosy, upturned face. “Turn around.”

“Yes!” Spinning on her knees, Jane wiggled her rounded ass and threw a huge smile over her shoulder. “Like this?”

Lust filled-out his mating tool until it jutted stiff and hard. He lowered onto one knee, bringing him directly behind his mate. Gently squeezing the back of Jane’s neck with one hand, he directed her cheek to rest on the sweet-smelling moss floor of the nest. His other hand raised her hips and ass high, to offer herself to him, Lord of the Jungle.

Jane deepened the flex of her back and displayed a stunning view. “Like what you see?”

“Ooh-ooh.” Tarzan swept his hands over the ripe perfection of her rounded butt. His finger traced the little dots she got from the sun and the scar from when she fell. “Tarzan like.”

From the corner of his eye, he saw Coral had stopped chewing leaves and sat still, watching them.
Good. Mating in front of the annoying gorilla would, as Jane once said, “Kill two birds and eat them, too.”

Slowly, he leaned forward and ran a finger over her glistening pink sex. It clenched in response, and his own sex pulsed with need. Dew gathered along the swollen lips and the air filled with the flowers of her scent.

“Touch me again,” she whimpered.

“Tarzan touch.” Resting his hand where he could thumb the pucker of her ass, he leaned lower, stuck out his tongue and licked the moisture from her mating slit.

Long strokes, up and down, her wild taste flowed over his chin and reminded him of the beach; a pleasant blend of warmth, salt, and sweet fruit. He licked her hard little nub, the one that made Jane cry out and arch her back, like how she was doing at the moment. Each lightly furred petal thoroughly lapped, bitten and sucked, until she widened the spread of her legs.

“Come on, Tarzan.” Her whine pulled at him with her hard breaths. He hated the torture he had to put her through. She tilted her hips and thrust back. “I’m ready.”

He returned to his kneeling position behind her, but kept his fingers stroking in and out. Her moans grew louder.

To his right, Coral straightened, sitting taller to see over the rim of his sleeping nest. Totally focused on them, she didn’t even notice when Chee-tah climbed down a branch to land beside her.

No one, not even a friend from his younger days, could ever push Tarzan’s mate from her position as his alpha female. To permit such a thing would be to force Jane away.

And he would never allow that to happen.

High in the canopy on their platform of branches and leaves, scraps of moss hung from the twigs in sheets of torn webs and swayed in the breeze. Tarzan notched his mating tool to Jane’s slit. Then, turning to stare directly into Coral’s eyes, rebuking the ape to her place, he plunged into his mate’s welcome heat.

Coral’s cricket-brown eyes bugged out. Her lips pulled back. She opened her mouth wide and released a deafening roar.

The little white-faced monkey grabbed the banana out of the gorilla’s hand and swung his getaway on the nearest vine.

The branch Coral stood on bounced with her outrage, raining loose leaves and debris onto birds that squawked below.

“What the hell is all that noise?” Jane raised her head at the commotion.

Tarzan gripped the back of her neck and urged her cheek to rest on the nest floor once more. Holding the majority of his weight on the bent knee, his other hand reassured Jane with a squeeze of her hip. “Chee-tah take Coral’s banana.”

“Well, give her another one. She’s throwing a fit.”

In the dominant male position Tarzan took his female from behind, thrusting in and out firmly, while he held Coral’s hard glare.

The ape wanted more than his banana, but that fruit was only for Jane.

Dependent upon her vine-swinging rescuer who acts more ape than musclebound man, she places her survival in his rugged hands and relinquishes her desire to his raw sensuality.

For more seasons than he can remember, Tarzan has lived among the tiny island’s gorilla band. Instinct propels him to save the female he finds half-dead in the surf, but gazing into her eyes, his mating tool dances an ancient tribal beat.

While the pirates search for their bounty, Tarzan and Jane are in danger. To survive, they’ll have to hang onto each other as they swing for dear life. Their adrenaline-rush of passion among the canopy of the jungle threatens not only a dizzying fall from a great height, but also into love. 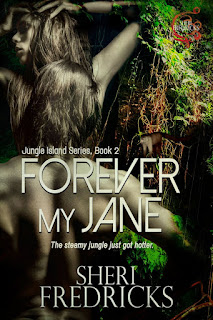 On a calm morning out at sea, Jane is swept into a nightmare. Pirates sink her yacht and leave her for dead. Washed onto an uncharted island inhabited by a wild man with a hungry sexual curiosity, he claims her as his mate.

In the treetops where life hinges on a diet of balance and steady nerves, the Lord of the Jungle—a powerful alpha male—rules his home. Through a language of grunts, she understands his loneliness as the sole human living amongst a band of mountain gorillas. On her own she’s helpless, a captive without chains, and soon realizes the safest place on the island is next to his dominant side.

Tarzan’s simple life took an unexpected turn when the female landed on his shores. His primitive need to mate is welcomed by her own desires for him. When the dreaded pirates return, so does the danger to his woman.

Jane will do anything to keep Tarzan alive, but in order to survive, she must trust his jungle instincts.

The steamy jungle just got hotter.

Always on the hunt for the uncommon things in life, award-winning author Sheri Fredricks thrives on creating romantic adventures.

A former engineering secretary, she lives on California’s beautiful central coast. "I wanted to move away from a profession of inflexible right angles and create an unboxed world with no boundaries."
A voracious reader since her early years, Sheri found her brain crowded with stories of her own. "Ultimately," she says, "my husband encouraged me to write them all down."

Sheri loves to spend time at home and connecting with readers. A computer hutch keeps her focused on creating stories, but the panoramic view of life on a ranch will call her outside to play in the sun.

Email ThisBlogThis!Share to TwitterShare to FacebookShare to Pinterest
Labels: @Sheri_Fredricks