#ReleaseBlitz Thank You For Holding by Julia Kent & Elisa Reed

Having it all is a fantasy, right?

Carrie Shelton thought her boyfriend was too good to be true. Her best friend's brother? A guy who loved antiquing? Who cuddled on the couch while watching foodie YouTube clips and talking about artisanal spices? Who helped her accessorize her outfits?

So when he ran off with Kevin, the owner of an antique shop, right before his sister’s wedding, Carrie’s life went from fantasy to nightmare.

As maid of honor, she can’t back out of the wedding. And her ex is the best man - but now he has his own best man.

She needs a date. Stat.

Enter Ryan. Sure, he’s a hot male stripper at the O Spa where she works as junior designer, but he’s a few years younger and just, you know -- a friend.

Perfect. She needs a friend more than she needs a boyfriend.

A weekend of playing her boyfriend so she can save face is a lot to ask, but for some reason Carrie doesn't understand, Ryan's all in. Enthusiastic, even.

Especially when it comes to physical displays of affection.

Because if Ryan's just pretending he's in love with her, then why does the chemistry between them -- and between the sheets -- feel so real?

Carrie can't settle for almost, though. She's already done that. She's not putting her life on hold anymore.

Turns out Ryan won't, either.

He's holding out for more.

Thank You For Holding is a STANDALONE in the On Hold series. You do not need to have read book 1 in the series, Our Options Have Changed, but after reading about Carrie and Ryan’s friends-to-lovers adventure, you’ll want to. ;) 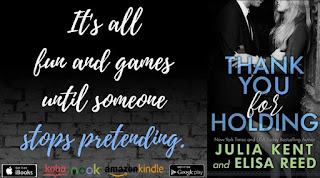 I'm going to be the maid of honor in my friend Jenny's wedding. You probably saw that coming. I met Jenny at work here at the O Spa, the women’s private club chain where I am the Assistant Director for Design. O Spas are the “fourth space” for women. Home, work, and other public venues are the first three.

We are meant to be the ultimate space. From highly-trained, well-oiled, hot massage therapists who wear g-strings that are outlawed in 111 countries, to a sex toy boutique with weekly workshops, to a new coffee shop with lattes that are better than sex, the O Spa caters to what women want.

A break, a chance, and a friend.

Jenny loved working for O, but she moved on a year ago, a promotion she could only get by changing companies. We were never just work friends. We're true best friends, and besides that, we could be sisters-in-law someday. I'm dating her brother, Jamey.

Who is standing in front of my desk right now, telling me about the tickets he just scored to Straight No Chaser at the Wang Center in November. We love a cappella.

"Fifth row, Carrie! And it'll be near the holidays, so maybe they'll do songs from their Christmas album!" His dark, wavy hair falls over his forehead in a boyish little curl. His eyebrows are perfectly arched. He gets them threaded more often than I do. His narrow chinos are rolled at the cuff, exposing his bare ankles in brown loafers. And is that my cotton scarf knotted around his neck?

I smile at him. Jamey is a great boyfriend because he always wants to do fun and unusual things. Has ever since we began dating two years ago. Our friends rely on Jamey to keep them current. When Steve Martin curated the Lawren Harris show at the MFA, we were the first people in the door. When Juliet opened in Union Square, we were tasting the tasting menu before anyone else had tasted it.

You can see why a lavender flowered cotton dress -- with puffed sleeves -- is of no use to me.

“We can go back to my place after the concert and I’ll make cocoa. Bet you’d enjoy something sweet and hot,” I say with a flirtatious grin. I give him what I hope is a smoldering look. He’s holding my hand and his eyes widen in mock excitement, then he looks away. 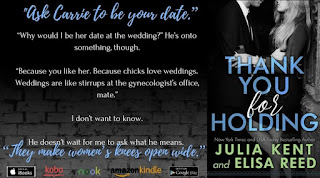 New York Times and USA Today Bestselling Author Julia Kent writes romantic comedy with an edge. From billionaires to BBWs to new adult rock stars, Julia finds a sensual, goofy joy in every contemporary romance she writes. Unlike Shannon from Shopping for a Billionaire, she did not meet her husband after dropping her phone in a men's room toilet (and he isn't a billionaire). She lives in New England with her husband and three sons in a household where the toilet seat is never, ever, down

Elisa Reed is a journalist-turned-fiction-writer whose snappy,  irreverent prose combines with an irrepressible zest for the simpler, and often intimate, pleasures of life to produce fun(ny) contemporary romance with a focus on second chances. New England born and bred, Elisa Reed now lives, writes, and plays in New Orleans and along the sugar sands of the Gulf Coast.

Release blitz organized by Writer Marketing Services.
Posted by Reviews By Crystal at 12:30 AM