Two Hearts, One Soul Duet: Book One Has Arrived!

International bestselling author London Saint James’ first installment from Two Hearts, One Soul Duet is the epic tale of abiding love, heart-wrenching loss, and an astonishing bond that will find a way to endure.

Winter Perri never truly understood love until she met Austin Carlyle—the man who would rock her world to its foundations and give her something to believe in. But the night before they were to be married, the fairytale shattered.

Thirteen years later Winter is pulled out of her seclusion only to have a painful past confront her, and when it does, she’s left questioning reality, because the impossible is looking back at her with the face of a destroying angel, and piercing eyes in too familiar shades of blue.

“Wow!”
With a start, I turned in the direction of the smooth, male voice I’d heard.
Some guy was standing perfectly still over by the corner booth. His tall, lean body was casually propped up against the wall. His black jeans were worn, his left knee sticking out a hole, and his steel-toed boots untied—the leather tongue of one boot caught in the bottom fray of his jeans.
My gaze moved from his boots, up the length of him, taking in a black leather bomber jacket overtop another black pull-over hooded sweatshirt. Then came the face shadowed beneath the dark hood.
When my eyes found his, my world shifted. I was overcome by something. A pull maybe. Whatever it was, my heart fluttered and raced like I’d dropped a great distance at a fast rate of speed, turning and flipping my stomach.
As if in slow motion, his arm lifted—hand running over the hood—removing it.
One strand of tousled, pitch-black hair fell over the smooth expanse of his forehead bringing my gaze to his dark brows. They arched over long, black lashes which made the color of his eyes pop. And those eyes, for lack of a better word, were amazing. I wasn’t looking into one shade, but differing shades of blue-gray.
I placed my palm over my swirling stomach as my body shook with the immediate urge to touch him—unsure he was real. He was…beautiful.
His jawline was strong, and his chin was dimpled with a cleft. His cheekbones were high and pronounced and the line of his nose was just a very slight bit from a straight line at the bridge. This fact only made this slightest of imperfections a simple perfection. He looked as though he had been carved—chiseled from the hand of an old master.
When the full shape of his lips turned up into a breathtaking smile, I may have gasped. He had the kind of smile that would make angels envious, or if not envious, they’d surely sing in glory at the sight.
With a dip of his head, he ran his fingers through his hair. I wanted to be his fingers so I could touch him, caress his face, and trace my fingertips over his beautifully etched lips.
I think I forgot how to blink.
Was I even breathing?
My mouth went dry and cottony. All I was capable of hearing was the fast beat of my heart pounding hard in my ears until he laughed a low, even, musical tone. “That was impressive. I thought I might need to step in, but you handled yourself well.”
It took me a moment to process his voice and his words. I was still stuck on the planes and angles of his spectacular face. “Um...I’m sorry, what?”
“What you just did. Those obnoxious men. Impressive.”
“O-oh?” I was still a little muddled in my thoughts, though managed, “They’re world-class jerks.”
The small laugh lines at the corners of his sensual mouth made their startling appearance with that devastating grin of his.
I stared, rather oddly for a moment; pretty sure I was still unblinking.
Get a grip. You’re acting like a total idiot.
The strange silence flustered me for an instant. I needed to say something because he was just looking at me.
Oh, my God. He’s really looking. Say something. 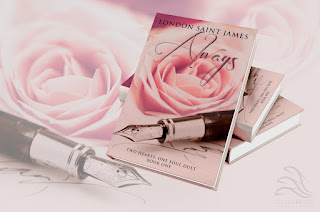 London Saint James has lived in many places, but never felt 'at home' until she met the real-life man of her dreams and settled down in the beautiful Smoky Mountains of Tennessee. London lives with her husband and their fat cat who thinks he owns them.

As an award-winning, international bestselling author, London is living her childhood dream. She knew all the scribbling she did, that big imagination of hers, and all those clamoring characters running around in her head would pay off someday.

Posted by Reviews By Crystal at 2:40 AM

Email ThisBlogThis!Share to TwitterShare to FacebookShare to Pinterest
Labels: @LSJRomance