#Review #GiveAway FEELS LIKE THE FIRST TIME By Marina Adair 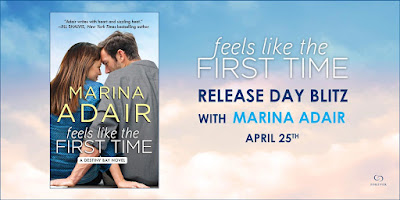 Feels like the First Time is the second book I have had a chance to read by Marina Adair. I was just as impressed with this book as I was The Last Kiss of Summer. I think it's safe to say I have added another favorite author to my list. Ms. Adair has a way with a story that had me intrigued at the beginning and feeling that wonderful heart warming awe at the end, with plenty of drama, family, romance, and tension in the middle.

Ali Marshal has all the characteristics I like in my heroine. She is sweet, caring, independent, has a touch of sass and feisty enough to keep those she loves at least a little in line.  I really liked Ali. She is one of those ladies you want to sit down with and dish about life, family, and friends.

Bradley Hawk is running a successful business with is best friends. Things are going pretty well and he's trying to get on with his life. He had his heart ripped out of his chest and stomped on not so long ago. Now he has deal with the lady that broke his heart and he has to be the good business man that he is.

Hawk and Ali are friends with that ever presence of attraction just lingering under the surface. It could be unleashed at any time if only there wasn't so many obstacles in their way and misunderstandings that need cleared up, and OK they both need to confess their feelings.

I loved watching Hawk and Ali explore their deeper feelings for each other. The attraction is hot and the passion is firework worthy. Hawk steps up to help Ali when she needs it most. He came up with some of the sweetest ways to help her. I don't think you could help buy fall for Hawk.

I also enjoyed the family dynamics that make the tension just little tighter. Ali and her sister haven't been the closest of sisters and there is some sibling rivalry there that adds to the pressure Ali is feeling to be the perfect daughter.

On the whole I really really enjoyed this story. The story line was incredible. The characters are great and it was wonderful to see some friends from The Last Kiss of Summer. This is part of the Destiny Bay Series but it stands on it's own just fine. You'll enjoy catching up with friends if you have read The Last Kiss of Summer. The twist and turns had me wondering what was going to happen next and just how all the secrets and  frustrations were going to be worked out. It is a page turner of a story that is for sure.

I was given the opportunity to read this fabulous story and it has been my pleasure to share my thoughts with you.

You may read more of my reviews on Marina Adair's work here. 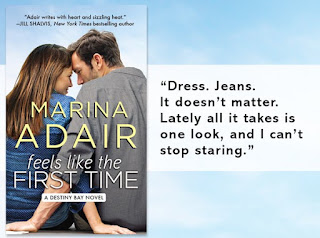 There are a lot of things Ali Marshal doesn't do: pink anything, a day without chocolate, and Hawk, her sister's ex-husband. Sure, he's a sexy former NHL star who can make her pulse pound with just a wink. But he belonged to Bridget first. And no matter how long she's had a crush on him, how great he's always been to her dad, or that her sister is engaged to someone else now and Ali needs a date to their engagement party, she can't give in to temptation. Can she?

It's been years since his disastrous marriage crashed and burned, and Bradley Hawk has finally moved on. So when Bridget blows back into town with her new fiancé, throwing the engagement party of the year, he could care less . . . until Ali tells one little lie that lands him smack dab in a fake relationship. After one promise to be Ali's date and two of the hottest kisses he's ever had, Hawk can't deny how much he wants her. But what happens when this fauxmance starts to feel very, very real?

Ali nodded because she needed him more than she needed her next breath.
The intensity of her feelings terrified her. They always had. Even at seventeen she knew what she felt went beyond the run-of-the-mill teenage crush. She’d been in love. Sure, it was a young, simple love, but it was love all the same.
Only he’d loved someone else.
So when he married her sister, she did her best to let him go. But no matter how painful it had been for her, and at times the ache was so acute it had been paralyzing, she was never able to set him completely free. Choosing the pain over the loss.
Now he was back, looking at her how she always looked at him, as if he’d never let go, and Ali gave in to the fantasy. Played out the what-ifs she carried with her for over a decade. He’d been hers for so long, she let herself believe that she was his, too.
He was asking for right here, right now—this she knew. Tomorrow, reality would creep in, and everything would go back to the way it was. But tonight, sitting on this beach, overlooking a world bigger than the two of them, Ali wanted to feel what it was like to be loved by the man who owned her heart.
“I want,” she said.
“What do you want, Aliana?” he whispered, the sound of her name on his lips doing crazy things to her. Crazy girly things that made her feel delicate and desirable.
“I want you.” She trailed her hands down his pecs to that flat stomach and lower, loving how his muscles rippled and curled under her touch. “I want you to pamper me so hard I won’t remember how to walk come morning.”
Hawk’s eyes darkened, and his mouth was on hers. Hard and demanding, and just how she’d imagined. There was no warm-up, no testing the waters. He was kissing her as if he knew what he wanted.
And he wanted Aliana.
Their mouths were fused together, her hands gripping his shoulders for purchase, but his fingers were gentle, languidly exploring her face, her neck, the curve of her shoulder, slowly moving down her arm and bringing the wide neckline of her shirt with him.
He never stopped kissing her, but she felt his lashes flutter open, realized that she’d never closed her own. Then his deep brown eyes locked on hers, watching her as they kissed, and it was erotic and unexpected. As she watched him back, she felt his lips curl into a smile. Could feel the dimples on both cheeks come alive under her touch.
“You like to watch,” Hawk growled, and she felt her cheeks flush.
Ali never considered herself a watcher. But Hawk was such a beautiful and commanding man, she’d never been able to look away. Not even now, when her body was begging for release. He was that good—a simple kiss and she was so turned on, she could feel her body shaking.
That smile turned cocky.
“It’s not like I stand there peering through your bedroom window at night,” she said, leaving out that night he was at the bar. His bedroom window during the morning, when he was walking around after a shower. She was more than guilty.
“I’ve peered through yours.”
And to prove he wasn’t the least bit ashamed, he lowered his head and placed an openmouthed kiss on her shoulder, those eyes of his never leaving hers. Not even when he moved lower toward her collarbone, his mouth working her with a softness that took her by surprise and a reverence that made her feel as if she was precious.
Ali wasn’t sure what to do. Hard, challenging, complicated—that was what she was used to. But this was light, simple—too easy to be real. It confused her as much as it terrified her. 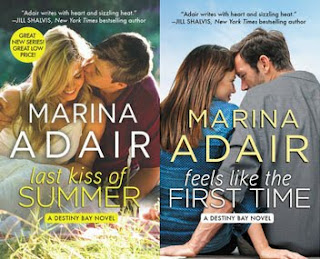 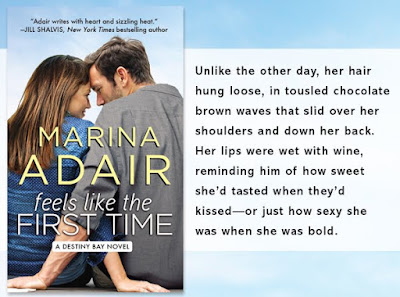 Marina Adair is a #1 National bestselling author of romance novels and holds a Master of Fine arts in creative writing. Along with the Destiny Bay series, she is also the author of the Sugar, Georgia series, the St. Helena Vineyard series, and her new Heroes of St. Helena series. She currently lives with her husband, daughter, and two neurotic cats in Northern California.

As a writer, Marina is devoted to giving her readers contemporary romance where the towns are small, the personalities large, and the romance explosive.