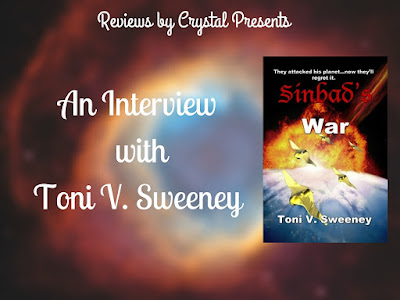 Crystal: Today I have the pleasure of hosting Toni V. Sweeney. Hi Toni! I'm so excited you could visit with us today. Would you share a little bit about yourself with us today?

Toni: I’m originally from Georgia but have lived over 37 years in Nebraska, as well as ten years in California. I like to joke I lived 30 years in the South, a score in the Midwest, a decade on the Pacific Coast and I’m now trying for my second 30 on the Great Plains. I now reside in Nebraska’s capitol, Lincoln. I’ve been a published writer since 1989, and have had approximately 72 novels published, including re-releases under my own name and my pseudonym, Icy Snow Blackstone. Currently, I’m also publicity manager for Class Act Books. I also review novels for the New York Journal of Books Online and the Paranormal Romance Guild and was recently named a Professional Reader by netgalley.com. (pauses for breath)

Toni: At present, I’m re-editing and lengthening the novels in my series The Arcanian Chronicles. This is a Sci-Fi family saga in two parts. Part 1 has seven novels and is kind of Game of Thrones-ish, though it was written and originally published years before George RR Martin’s epic. Part 2 contains 8 books and is set in the far future, a bit Star Wars-like.

Toni: I have the TV series Beauty and the Beast (the original series, not the recent one) to thank for giving me the germ of the idea. I was intrigued by Vincent’s leonid appearance. I decided to have my hero be a smuggler who comes from a feline species that hates Earth people. My heroine is from Earth, of course. He’s drawn to her…and from there I let the fur fly.

Crystal: Do you have a favorite snack you like to munch on while writing? If so would you mind sharing what it is with us?

Toni: I like finger-food snacks…Cheetos, M&Ms, Dry-roasted peanuts…but I have to ration them because they’re good-tasting but fattening. Like the commercial says: “Bet you can’t eat just one!”

Toni:  Sometimes I think writing is my hobby! I like photography and I’m likely to whip out my phone and snap a pic if I see something that catches my eye. I also like to paint…pictures, not houses…and once actually had an art show. I have quite a few of my works framed in my apartment. Believe it or not, I like to read. I have 12 bookcases in my apartment, jammed with mysteries, SF, fantasies, and horror novels, not including my own.

Toni: Sometimes I listen to the local PBR station. When I was writing the Adventures of Sinbad series, I listened to Rimsky-Korsakov’s Scheherezade a great deal, especially the Tale of Sinbad the Sailor. That piece was inspirational because it set the mood for the story perfectly.

Toni: Only that I hope everyone enjoys the excerpt and will look up the rest of the novels in the series. Book 6 Sinbad’s War was released April 15 by Class Act Books. 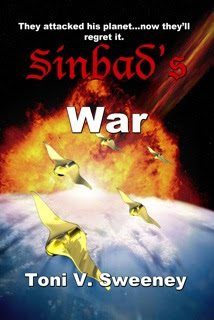 Sinbad sh’en Singh, smuggler-turned-shipping magnate, has become quite the family man, knee-deep in offspring and complacent with his life...but Fate is about to interfere...

Terra is again at another war, attacked by the Severani, members of an aggressively militant planet daring to challenge the Federation.

That was the enemy's first mistake.

Bombardment of other Federation planets follow...then they invade Felida, and among the casualties are the people Sin holds most dear...

...and that is mistake Number Two.

The hostile Severani are about to discover there’s nothing quite so dangerous as a Felidan who’s lost his mate...especially if his name's Sinbad sh'en Singh.

Email ThisBlogThis!Share to TwitterShare to FacebookShare to Pinterest
Labels: @ToniVSweeney