#SpotLight Beneath a Scarlet by Mark Sullivan ~ @MarkSullivanBks 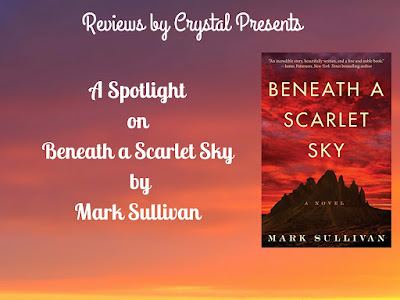 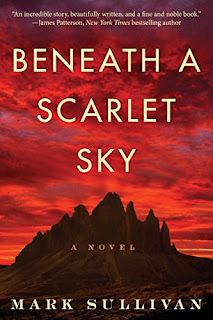 Nearly half a million people were killed in the Nazi occupation of Italy during World War II. But among those staggering losses, an incredible number of the most persecuted—some 40,000 Italian Jews—made it out of the war alive. Some survived the death camps. Others evaded arrest. Still others fled, some of them aided by the efforts of everyday Italians who risked their lives to save their fellow countrymen. So many lives and so much sacrifice—and still, so little has been written about what happened in Italy that historians now call it “The Forgotten Front” of WWII. But all that is about to change.

Based on the true story of the unlikeliest of heroes, BENEATH A SCARLET SKY is #1 New York Times bestselling author Mark Sullivan’s riveting new tale of extraordinary courage and tragic star-crossed love during the Nazi occupation of Italy. It follows 17-year-old, real-life hero Pino Lella as he helps lead countless Jews out of northern Italy along an underground railroad through the Alps. The saga continues when Pino is then recruited to become a spy for the Italian Resistance. Working undercover as a driver for the head of the Nazi High Command in Italy, Pino gains access to some of the most powerful men in Germany but also witnesses the atrocities of the war firsthand.

When he first heard snippets of Pino Lella’s story at a dinner party more than 10 years ago, Mark Sullivan was unable to shake the image of an Italian teenager leading refugees to safety across perilous mountain ridges, and he became determined to tell the tale of this anonymous, unsung hero. For nine years, Sullivan immersed himself in research. When he finally located Pino in Italy, Mark was able to conduct a series of interviews with the now 79-year-old, in which Pino recounted in painstaking detail the most fraught and eventful years of his life. Because of these incredible interviews, BENEATH A SCARLET SKY is more than just a novel based on true events—it is a piece of history, and Pino’s own memories have given this book its realism, its heart, and its shattering sense of loss and tragedy. It is truly a tale unlike any other—a story of courage and intrigue, love and redemption—and one that can finally be shared. 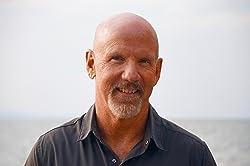 Mark Sullivan is the acclaimed author of eighteen novels, including the #1 New York Times bestselling Private series, which he writes with James Patterson. Mark has received numerous awards for his writing, including the WHSmith Fresh Talent Award, and his works have been named a New York Times Notable Book and a Los Angeles Times Best Book of the Year. He grew up in Medfield, Massachusetts, and graduated from Hamilton College with a B.A. in English before working as a Peace Corps volunteer in Niger, West Africa. Upon his return to the United States, he earned a graduate degree from the Medill School of Journalism at Northwestern University and began a career in investigative journalism. An avid skier and adventurer, he lives with his wife in Bozeman, Montana, where he remains grateful for the miracle of every moment.