Behind the Scenes at Meghan’s Playhouse

What’s your favorite erotic fantasy? Does it include ménage – maybe a man sandwich, or making love with a woman and a man at the same time? Have you ever kissed a girl?
We started writing our Meghan’s Playhouse series to deliver some of our favorite fantasies for our readers. When we began book 1, we simply planned to write an erotic romp. We knew we wanted a young “sprite,” a bisexual woman full of energy and inventiveness, as the star in our story. We thought of her as a modern-day Aphrodite, bringing other couples together through sharing sex with both partners.
In the beginning, we didn’t give too much thought to her motivation, or to that of the other major players. Characters have a way of taking over, though, and Meg wasn’t satisfied with just being a piece of fluff having hot sex scenes. Each book in the series is its own love story, stirring up emotions even Meg wasn’t prepared for.
The original five-book series was first released in 2009 by a different e-publisher. It’s been unavailable for over four years, and we’re thrilled Extasy Books has contracted to re-release it, completely revised and re-edited. In the meantime, Meg insisted we write one more adventure. The six books are releasing approximately every ten weeks.
Seducing Cat, May, 2017
A Woman for Zachary, August, 2017
April Swings, October, 2017
A Ring for Christmas, December 7, 2017
Vegas Gambler, February 23, 2018
Meg’s Folly, May 4, 2018 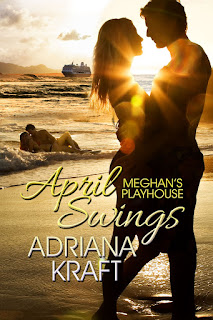 April Day deeply loves her husband, Derek, but something’s missing. To heat things up, she books them on a Caribbean cruise for their seventh anniversary. She’s not sure what she’s looking for, but she knows she’s found it as soon as she spots the delectable sprite of an actress who stars in the ship’s daily shows.

Meghan Keenan’s having a blast with her latest squeeze, Clark Hendricks, who writes and directs the shipboard main shows. Should she turn down April’s request to heat up her marriage? And if she accepts, where will Clark fit in?

Derek is stunned by his wife’s brash pursuit of the hot young actress. Must he match her boldness to keep her from leaving him?

“Crap, you haven’t pounded me like this for years,” April panted.
Derek felt her fingers clawing at his back. She hadn’t been a wildcat like this for years, either. He lifted her butt off the bed and continued plowing in and out of her. Her heels pounded his backside.
“I’m coming!” she keened. “Come with me. Do it.”
Her verbal barrage rattled his brain, and then his cock exploded. He worked his wife’s hips back and forth along his length, spurting and filling her like she’d demanded. Breathing heavily, he flexed his arms and settled April on the bed, then leaned over and kissed her forehead. “I didn’t hurt you, did I?” Her giggles confused his muddled thoughts.
“Good grief.” Grinning broadly, she lolled her head from side to side. “Does this look like a woman in pain?”
He shook his head. “Not really. But let’s roll over so I don’t have to worry about crushing you.” He rolled them easily until April beamed down at him.
She licked perspiration from his chin. “So watching me ride Meg’s fingers must’ve been a turn-on after all.”
He gave her a crooked smile. “That, and imagining her howling into the night.” He ran a finger along her nose. “You didn’t do badly in that department, yourself.”
“I hadn’t realized how silent I’d become over the years until Meg quizzed you about me. I could hardly keep my mouth closed in the lounge.”
“I noticed.”
“So are you ready for Meg to get more involved with us?”
He scowled. “Do we have to? Wasn’t this good enough?”
April shook her head. “Who knows what good enough is? Do you really want to turn your back on Meg? Do you really want me to turn my back on her? We may never have this kind of opportunity again. We’re free to try whatever we want here.” She kissed his mouth and dragged her tongue across his lips. “Don’t you at least want to try? For us. Or at least, for me.” 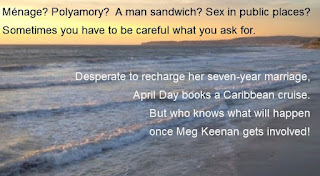 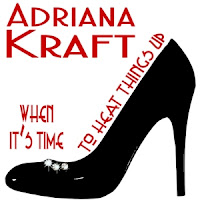 Two winners will win their choice of Book 1 or Book 2 in the Meghan’s Playhouse Series:

Seducing Cat (Book 1)
What could college English Professor Caitlin Shanahan ever have in common with the brash carpenter Kurt Davis?  The sexy sprite Meghan Keenan, that's what.

Release blitz organized by Writer Marketing Services.
Posted by Reviews By Crystal at 1:37 AM