#SpotLight ~ Never Too Late by the Bluestocking Belles ~ Roses in Picardy by Caroline Warfield ~ @CaroWarfield, 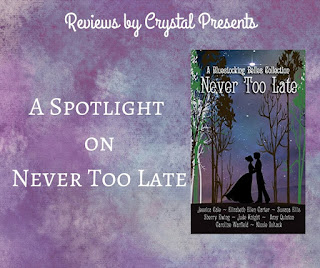 Never Too Late
by the Bluestocking Belles

Eight original stories on a single trope set across eight centuries. It is never too late for love.

Eight authors and eight different takes on four dramatic elements selected by our readers—an older heroine, a wise man, a Bible, and a compromising situation that isn’t.

Set in a variety of locations around the world over eight centuries, welcome to the romance of the Bluestocking Belles’ 2017 Holiday and More Anthology.

25% of proceeds benefit the Malala Fund.


The Stories of Never Too Late:

1181
The Piper's Lady by Sherry Ewing
True love binds them. Deceit divides them. Will they choose love?

1354
Her Wounded Heart by Nicole Zoltack
A solitary widow, a landless knight, and a crumbling castle.

1645
A Year Without Christmas by Jessica Cale
An earl and his housekeeper face their feelings for one another in the midst of the English Civil War.

1795
The Night of the Feast by Elizabeth Ellen Carter
One night to risk it all in the midst of the French Revolution.

1814
A Malicious Rumor by Susana Ellis
A harmonious duo is better than two lonely solos for a violinist and a lady gardener.

1886
Forged in Fire by Jude Knight
Forged in volcanic fire, their love will create them anew.

1916
Roses in Picardy by Caroline Warfield
In the darkness of war, hope flickers. In the gardens of Picardy, love catches fire.

About Roses in Picardy by Caroline Warfield:

In the darkness of war, hope flickers. In the gardens of Picardy, love catches fire.

After two years at war, Harry is out of metaphors for death, synonyms for brown, and images for darkness. Color among the floating islands of Amiens and life in the form of a widow and her little son surprise him with hope.
Rosemarie Legrand’s husband died, leaving her a tiny son, no money, and a savaged reputation. She struggles to simply feed the boy and has little to offer a lonely soldier.

Are men in Hell happier for a glimpse of Heaven?”
The piercing eyes gentled. “Perhaps not,” the old man said, “but a store of memories might be medicinal in coming months. Will you come back?”
Will I? He turned around to face forward, and the priest poled the boat out of the shallows, seemingly content to allow him his silence.
“How did you arrange my leave?” Harry asked at last, giving voice to a sudden insight.
“Prayer,” the priest said. Several moments later he, added, “And Col. Sutherland in the logistics office has become a friend. I suggested he had a pressing need for someone who could translate requests from villagers.”
“Don't meddle, old man. Even if they use me, I'll end up back in the trenches. Visits to Rosemarie Legrand would be futile in any case. The war is no closer to an end than it was two years ago.”
“Despair can be deadly in a soldier, corporal. You must hold on to hope. We all need hope, but to you, it can be life or death,” the priest said.
Life or death. He thought of the feel of the toddler on his shoulder and the colors of les hortillonnages. Life indeed.
The sound of the pole propelling them forward filled several minutes.
“So will you come back?” the old man asked softly. He didn't appear discomforted by the long silence that followed.
“If I have a chance to come, I won't be able to stay away,” Harry murmured, keeping his back to the priest.
“Then I will pray you have a chance,” the old man said softly.

Henry Randolph Wheatly answers to nothing but Harry. His quiet Calgary parents gave him character; his grandparents gave him joy when he ran free on their Saskatchewan farm. At twenty, heartsick over a self-centered girl, he left university to enlist. In the two years since, he has survived the Battle of the Somme and the hell of the trenches, and is set to endure more of the same.

The only joy Rosemarie Jacques had from her marriage to Raoul Legrand was the son she finally bore ten years after the dark day they married. When Raoul went to war, it was a relief. His death might have set her free, if he had not died with lies on his lips, leaving her a legacy of disgrace and shame. Living hand-to-mouth on a tiny island in the hortillonages of Amiens, she does her best to endure.

Caroline Warfield has been many things. Now retired to the urban wilds of Eastern Pennsylvania, she divides her time between writing and seeking adventures with her grandbuddy and the prince among men she married. Her new series sends the children of the heroes of her earlier books to seek their own happiness in the far-flung corners of the British Empire.

The Bluestocking Belles:
The Bluestocking Belles (the “BellesInBlue”) are eight very different writers united by a love of history and a history of writing about love. From sweet to steamy, from light-hearted fun to dark tortured tales full of angst, from London ballrooms to country cottages to the sultan’s seraglio, one or more of us will have a tale to suit your tastes and mood.