Whispers in the Dark
by Kris Bock 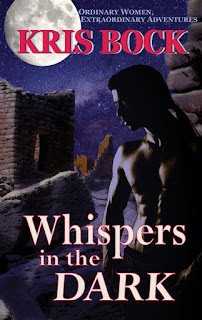 Archaeology student Kylie Hafford expects an adventure when she heads to remote Puebloan ruins to excavate. Romance isn’t part of her plan, but she meets two sexy men: Sean is a charming tourist who takes an instant liking to Kylie. Danesh, a site ranger who looks like an Anasazi warrior, seems to take an instant dislike to Kylie, and yet something draws them together. The summer heats up as Kylie uncovers mysteries, secrets, and terrors in the dark. She’ll need all her strength and wits to survive – and to save the man she’s coming to love.

Readers give a 4.2-star average to Whispers in the Dark, romantic suspense set in the Four Corners region of the Southwest. It stands alone and is not part of a series. Fans of Mary Stewart, Barbara Michaels, and Victoria Holt will love Kris Bock’s stories of romance and adventure.

I hit something, bounced, scraped, and finally landed with a thud that rattled my whole body.

I lay in the dark, blinded, my head ringing, pain washing over me in great waves. My lungs screamed for air, but it seemed like I’d forgotten how to breathe.

Finally I dragged in a breath. I closed my eyes and focused on breathing, waiting for the world to settle into place.

Rain misted my face, so I must be lying on my back. My head felt heavier than my feet. I shifted and realized I was lying on a slope with my head pointing down.

I tried to concentrate on those little details. I couldn’t handle anything more. Panic fluttered around me, but I refused to think about anything but the present moment. I flexed my fingers. When that worked, I moved my hands over my body, up to my face. My head throbbed, but when I felt around my skull, I didn’t find any serious damage.

I had to move. The thought battered at the back of my mind, a panicky whisper that I tried to ignore. I had to run. Hide. He was after me. I had to get away.

I clenched my teeth hard, as if I could bite back the pain and fear. Memories crowded in, like panicked ghosts wailing at the edges of my mind. Guns, strange men. Dangerous, threatening men. Danesh trying to protect me, the gun going off. My own helpless, panicked flight. Helpless. Worthless. Unable to fight, unable even to scream.

I tried to focus on this one moment, the physical sensations of my aching body as I lay on the hard, damp ground. The cold against my bare calves, the lump of rock pressing into my shoulder. That focus helped keep me grounded in the present. Never mind that this present wasn’t a place I wanted to be. I had to deal with reality. But I didn’t have to also deal with nightmares. Not now.

The little whimpers in my throat faded to short gasping breaths. I held on to this moment, this single slice of reality. Now to move forward. I didn’t have to like it, but I had to do it. One step at a time.
Get Whispers in the Dark on sale for 99 cents for the Kindle! 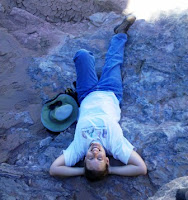 Kris Bock writes novels of suspense and romance involving outdoor adventures and Southwestern landscapes. In Counterfeits, stolen Rembrandt paintings bring danger to a small New Mexico town. What We Found is a romantic mystery about a young woman who finds a murder victim in the woods. The Mad Monk’s Treasure follows the hunt for a long-lost treasure in the New Mexico desert. In The Dead Man’s Treasure, estranged relatives compete to reach a buried treasure by following a series of complex clues. Read excerpts at www.krisbock.com or visit her Amazon page. You can also follow her blog, The Southwest Armchair Traveler.
Posted by Reviews By Crystal at 1:33 AM