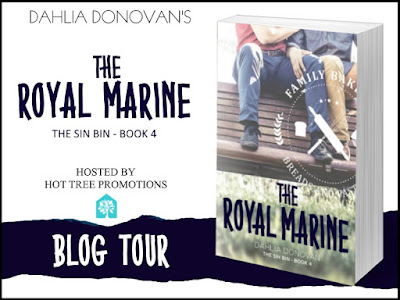 Who keeps the Royal Marine's heart safe when he's running headlong into danger?

Akash Robinson fuses his Indian and British heritage into his baked creations. His life is all things sugar and spice, especially when a blind date leads him to the older military man of his dreams. Family, friends, and an unwanted admirer all threaten both his sanity and his budding romance.

Hamish Ross carries the names of his lost soldiers on his back. He takes his work seriously with no time for love. All it takes is one impulsive kiss to lead him into uncharted romantic waters.
When a sarcastic baker mixes with a stoic alpha marine, who will come out on top when the flour settles?

The Royal Marine is book four in Dahlia Donovan's international bestselling gay romance series, The Sin Bin. Each one features hot rugby players and the men who steal their hearts. 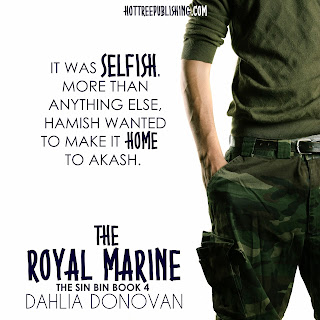 They traded stories over their simple pasta dinner. Akash half expected the man to make a move—or to make one himself—but the evening had been too easy, too comfortable for it; they’d simply enjoyed the shared meal.
A sharp contrast to what Akash imagined a first date with Scottie might entail. The former rugby player had texted him four times since the night he’d stopped by uninvited, having stolen his number out of BC’s phone. The persistence concerned him; he had no interest in having his life turned upside down by a stalker.
Making a mental note to apologise to his sisters for not taking their complaints about similar behaviour from other men more seriously, Akash had sent a text of his own earlier to Tens and Caddock. He knew them the best out of the rugby players involved with the Sin Bin. They’d sort out their mate, or he’d do it for them.
“Thanks for the tea.” Akash gestured toward the tin sitting on the nearby shelf. “Do you know how bloody hard it is to get that particular type of tea? It’s perfect for making biscuits.”
“Right.” Hamish was staring at him. He nodded absently, but didn’t actually appear to have heard him.
“Something wrong?”
Standing abruptly, Hamish strode around the table to grab Akash by the shirt. He dragged him up out of his chair, causing him to stumble forward. Akash could only blink at the slightly taller man in confusion, until those wonderfully rough fingers dug into his hair and yanked him up into a kiss.
Akash surrendered to it briefly before bringing his arm up to separate their lips—and bodies—when Hamish’s fingers drifted down the front of his shirt. “We’re not doing this in my kitchen. Not yet. Well, not in the bakery kitchen, ever. Health inspectors would have a fit.”
Hamish brushed his knuckles across the bulge in Akash’s trousers. “Later, then?”
“Later when we’re somewhere else and there aren’t two nosy brats peeking through the door.” Akash pointed toward the barely visible twins, who were once again eavesdropping on them. “Off with you both. I left you dinner on the table upstairs.”
While the rest of the meal went well, the passionate moment had definitely passed them by. Hamish stayed for another hour, helping to wash up the dishes. They exchanged several heated kisses, until Akash had to quite literally shove the man out the door.
He sank back against the frame of the still open door to catch his breath after seeing Hamish off. “Well, bugger me.”

Posted by Reviews By Crystal at 12:20 AM