Q: Would you share a little bit about yourself with us today?

A: Sure. I’ve been married to my husband for thirty-seven years, and he’s still the man of my dreams. Well, most of the time he is. I have three incredible children who I couldn’t be prouder of, and I’m the grandmother of two adorable little girls who I absolutely adore and love to spoil. And I feel blessed that I can make a living doing something I love and I’m passionate about. Although that means writing doesn’t, for the most part, feel like work so I have to be careful I don’t spend every waking minute at my desk. I always make time for my family, of course, but lately I’ve been feeling like I need to have more balance in my life.

A: I have so many favorite scenes that it’s hard to choose, but this one is cute and it doesn’t have any spoilers.

Julia didn’t have to be told twice and fast-walked to the back of the children’s book section to disappear up the stairs to her apartment. The smell of basil, garlic, and tomato sauce wafted past her nose as soon as she opened the door. Yesterday, she’d mentioned to Aidan that she’d been craving Rosa’s lasagna and garlic bread, and if her nose didn’t deceive her, that’s exactly what the man had brought home.
He met her at the door with a glass of red wine in his hand and laughter on his lips. “Cute headband. One of your lights are out.”
She took off the headband and tossed it in the direction of her bedroom and then kissed him. “You are the best boyfriend ever,” she said, once she’d reluctantly stepped back to accept the glass of wine.
“And you’re still the messiest girlfriend ever.”
She slid off her shoes. “I’m not cleaning tonight. I can’t. I’m too tired. I had to get up at four to get the revisions back to my editor before she leaves for the Christmas break.”
He grimaced. “You forgot, didn’t you?”
She sagged against him. “Please don’t tell me I have to go out tonight. I can’t remember the last time I didn’t have something to do.”
“Hang on to your glass,” he said, right before he swept her off her feet.
“Perfect. You can carry me around like this anytime. All the time would be good. At least until the Christmas rush is over.”
He sat on the couch with her still in his arms. “Scooch over and lie back . . .” He gave his head a slight shake. “. . . on the pile of clothes. Leave your feet on my lap.”
As she complied with his order, he raised his hip to pull out his cell phone. He started to knead her tired feet while he waited for whoever to pick up, grinning when she moaned.
“Hey Finn, do me a favor and tell—”
Julia made a grab for the phone when she realized what she’d forgotten. “No, no, I promised Olivia I’d help out for the Snow Ball. I’ll just be a little late.”
“You heard her? Don’t listen to her. She’s exhausted. Tell Olivia to blame me. The sugarplum fairy won’t be helping out or performing at the Snow Ball either. She’s hung up her tutu for the season.”

Q: Did you have to do a lot of research for this book or any other? If so do you have a fascinating fact that you have learned you would like to share with us?

A: Aidan used to be a DEA agent, so I did some research into the DEA, like where their New England field offices were located, current cases, and specific agents to build Aidan’s backstory.

The other day I discovered a fascinating fact about sandpipers while doing research for my current WIP, book 6 in the Harmony Harbor series, Sandpiper Shore. But maybe I’m the only one who finds it fascinating that the male Spotted Sandpiper raises the young, and not the female.

Q: Who are some of your favorite authors that you like to read?

A: Too many to name, so I’ll list a few of the books on my can’t-wait-until-they-release list. Year One: Chronicles of the One, Book 1 by Nora Roberts, Still Me by JoJo Moyes, The Great Alone by Kristin Hannah, High Voltage by Karen Marie Moning, Wild Hunger by Chloe Neill, and I’m waiting impatiently for an announcement as to whether Go Tell The Bees That I Am Gone by Diana Gabaldon will release in 2018.

Q: Is there a genre you haven't written that you would like to try?

A: I have an idea for a women’s fiction book I’ve been playing with, and I’ve started writing a mystery series that I’m having a lot of fun with, so we’ll see if anything comes of it.
"Heartfelt and delightful!" -RaeAnne Thayne,
New York Times bestselling author
About the Book: 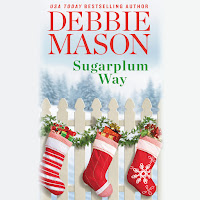 Romance writer Julia Landon knows how to write a happily-ever-after. Creating one for herself is a whole different story. But after a surprising--and surprisingly passionate--kiss under the mistletoe at Harmony Harbor's holiday party last year, Julia thought she might have finally found her very own chance at true love. Until she learns her Mr. Tall, Dark, and Broodingly Handsome has sworn off relationships. Well, if she can't have him in real life, Julia knows just how to get the next best thing....

Aidan's only priority is to be the best single dad ever. And this year, he plans to make the holidays magical for his little girl, Ella Rose. But visions of stolen kisses under the mistletoe keep dancing in his head, and when he finds out Julia has written him into her latest novel, he can't help imagining the possibilities of a future together. Little does he know, though, Julia has been keeping a secret that threatens all their dreams. Luckily, 'tis the season for a little Christmas magic.
Release Date October 31, 2017
Forever
Goodreads
Mass Market: $7.99
eBook: $5.99
ISBN: 9781538744154 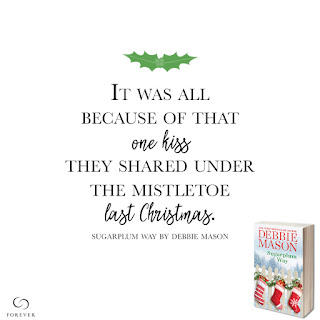 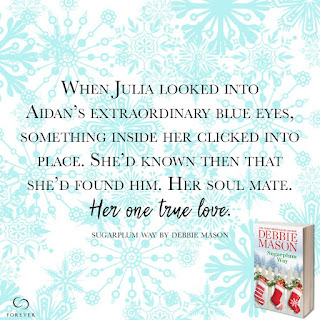 Debbie Mason is the USA Today bestselling author of the Christmas, Colorado and Harmony Harbor series. Her books have been praised for their "likable characters, clever dialogue and juicy plots" (RT Book Reviews). When she isn't writing or reading, Debbie enjoys spending time with her very own real-life hero, three wonderful children, two adorable grandbabies, and a yappy Yorkie named Bella in Ontario, Canada.


GIVEAWAY INFO: Win 1 out of 10 finished copies of Sugarplum Way


Posted by Reviews By Crystal at 2:02 AM