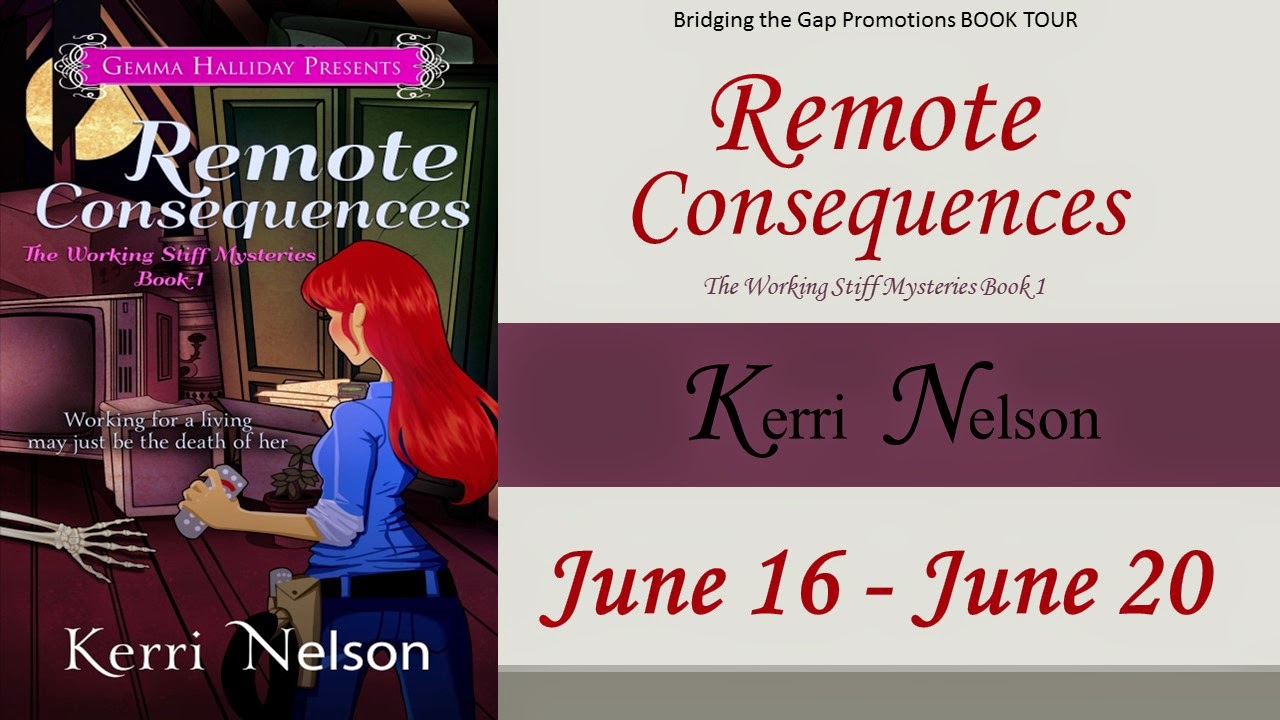 Crystal: Today as part of this Bridging the Gap Promotions Tour I have the opportunity to ask Kerri Nelson a few questions. Welcome Kerri, I'm so happy to have you here today. Would you share a little bit about yourself with us today?

Kerri:  I’ve been a writer since the second grade when I proudly wrote my first poem about a black cat.  Maybe that was a clue that I wanted to write about things that are mysterious.  Anyway, after a fifteen year career in the legal field and 6 years of publication in the romance genre, I’ve finally published my first mystery and that’s what brings me here today!

Kerri: Hmmm…this is a tough one.  I guess if I had to pin it down it would be…the scene in the car when Mandy first meets the mysterious new stranger in her life and attempts to arm herself in case he attacks.

Kerri:  Well, I’ve been dabbling with a thriller for a couple of years now and one day, I realized that I loved one of my secondary characters…Mandy Murrin.  I wondered what would happen if I pulled her out of that book and allowed her to star in her own book.  That was when I turned her story into a cozy mystery and the idea of making her a cable girl was my husband’s idea.

Kerri: I’m working on Book #2 in the Work Stiff Mystery series and it should be out this fall.  Mandy has a new job and she’s about to get in the middle of another wacky crime.  All the old characters make an appearance and some new characters as well.  And there will be food…lots of food involved.

Kerri:  No.  I’m the mother of three young children and they keep me beyond busy.  My routine is simply to WRITE whenever I can squeeze in a few minutes.  If I wait for a certain set of circumstances to appear or if I try to follow a specific routine, it will never happen.

Kerri: I didn’t have to do a lot of research for this because I’m familiar with the legal system from my former career.  And I set the story in a real town that I’m very familiar with.  But I did have to do a little research on the cable television industry.  My father was a lot of help in this as he worked in the telephone industry for many years and the two are not all that far off from each other.  Not too many interesting facts were to be had, but I have convinced myself that I never want to work in a job in which you have to wear cover-alls.

Kerri: My fave authors are Karin Slaughter, Lisa Gardner, Janet Evanovich, Beth Ciotta, Kathleen Long, Julie Kenner, and this new up and comer…you may have heard of her…Kerri (not afraid of blatant self promotion) Nelson.

Kerri: Uh, I’ve written a ton of genres so there is nothing much lost to me there.  But, I would like to see my thriller in print someday that is the one genre that I’ve written but not really actively pursued publication in—yet!
Thanks for having me!

Med school drop-out Mandy Murrin has returned home to care for her mentally handicapped, teenage sister. But despite having multiple college degrees under her belt, Mandy finds jobs aren't easy to come by in small town Alabama. Now instead of a stethoscope, she's forced to sport a tool belt as a technician for the local cable company, Flicks Vision.


But things go from bad to worse when, while on assignment at the Mayor's house, Mandy finds herself in the attic amongst cobwebs, Christmas decorations, and...a corpse? Suddenly Mandy's life is turned upside down with one missing body, a high school nemesis turned police detective, a mysterious stranger, and a town full of long buried secrets. If Mandy's not careful, this could be one dead end job where she may not make it out alive!

~~~~~~~~~~~~~~~~~~~~~~~~~~
Excerpt:
Two hours, three sneezes, and a half a box of Tic Tacs later, I was crouched in the oppressive heat of the attic. After two phone calls back to the office to ask my boss questions, I'd finally deduced that there must be a faulty coaxial cable somewhere in the house's wiring. Finding it was going to take time and patience. And I was low on both.
My stomach grumbled with hunger, and the dispatcher had radioed twice to ask when I might be able to take the next service call. But I was stuck here in the mayor's dreadful attic until I could find the source of the problem.
I inched along the perimeter in the near dark. When it came to blood and anatomy, I could stomach almost anything. But when it came to bugs and creepy crawlies, I was as girly as they came.
Holding my Maglite XL at arm's length to warn me of potential eight-legged predators, I scooted my knee forward another notch and winced as a splinter made its way through my pants leg and speared my tender flesh.
"Dammit."
I eased back onto my bottom and surveyed the damage. A shard of laminated wood about three inches in length protruded from my pants leg. I yanked it free and tossed it behind me. I'd have to tend to my wound later. A brief daydream image of sitting on a sunny beach—margarita in one hand, and a hefty worker's compensation check in the other—made me grin. Not a likely outcome for a splinter-induced injury, though.
Boxes of holiday decorations, an old baby crib, stacks of books, and a deep freezer cluttered the area. Standard stuff. Nothing special about His Honor's attic.
Deep freezer?
Who had a deep freezer in their attic? My head snapped back to the opposite corner where a standard eight-cubic-foot, chest-style freezer sat in the shadows. I stood up, brushing off the back of my pants. Deep freezers were heavy suckers. I knew this because I'd once had the corner of one dropped on my toe in my aunt's cellar basement.
As if in response to the memory, my toe ached deep inside my boot.
I'd never seen anyone lug a heavy deep-freeze up to an attic. It didn't make much sense, but at the same time—wouldn't it feel great to open that lid and feel the mist of ice-cold frost caress my face? Memories of homemade ice cream and preparing containers of summer vegetables for the fall trickled through my memory. Summers had been good once. A long time ago.
Back and knees stiff from the attic crawl, I limped toward the freezer. I doubted it was even running. Who would be stupid enough to run it up here? What if it defrosted and leaked down through the floorboards? Imagining worst-case scenarios was kind of like a superpower to me.
But as I reached out to touch the dusty lid, I heard the humming thrum of the motor inside.
Probably shouldn't mess with it.
I looked around the attic as if someone were going to pop out and shake their finger at me for snooping. But when no one appeared, I lifted the lid.
The blessed frost hit my face, and I inhaled the frigid glory. But when the mist cleared—my breath caught in my throat. Lungs frozen in an ice block of silent shock.
There, among the Tupperware containers, curled into a fetal position was…one dead body.

Kerri Nelson survived a fifteen year career in the legal field and then took her passion for crime solving to the page. But her journey to become a mystery author took a decade long detour into the world of romance where she penned twenty two novels and novellas in various sub-genres.
Born and raised a true southern belle, Kerri holds many useful secrets: how to bake a killer peach cobbler; how to charm suspects with proper batting of the eyelashes; and how to turn your parasol into a handy weapon.
Kerri is an active member of Sisters in Crime and Romance Writers of America which includes various volunteer positions such as Board Member at Large and Daphne Published Contest Category Coordinator of Kiss of Death RWA (Chapter for Romantic Suspense Authors).
Learn more about Kerri and her new Working Stiff Mystery Series, at her website:  www.KerriNelson.com
Follow her on Twitter: www.twitter.com/kerribookwriter
For Contests and More, visit Kerri’s Author Blog here:
www.kerribookwriter.blogspot.com 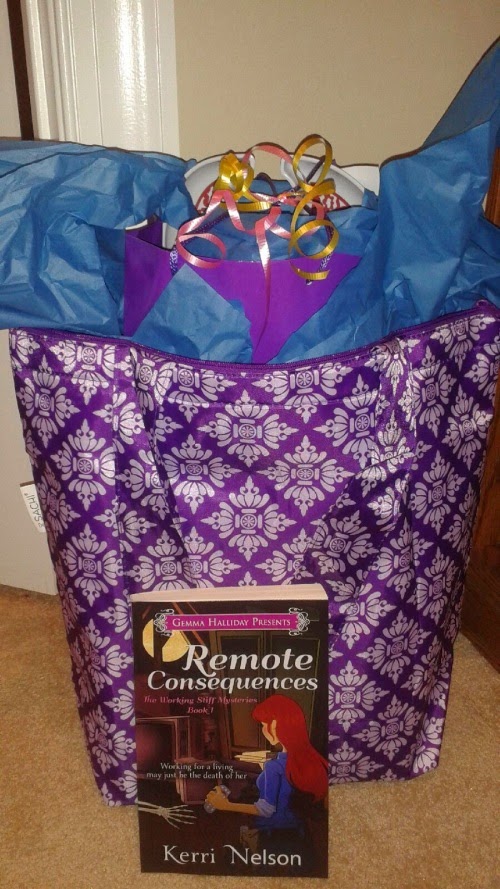 Kerri is giving away a gift bag full of goodies !!!
Rafflecopter code:

Posted by Reviews By Crystal at 11:55 PM