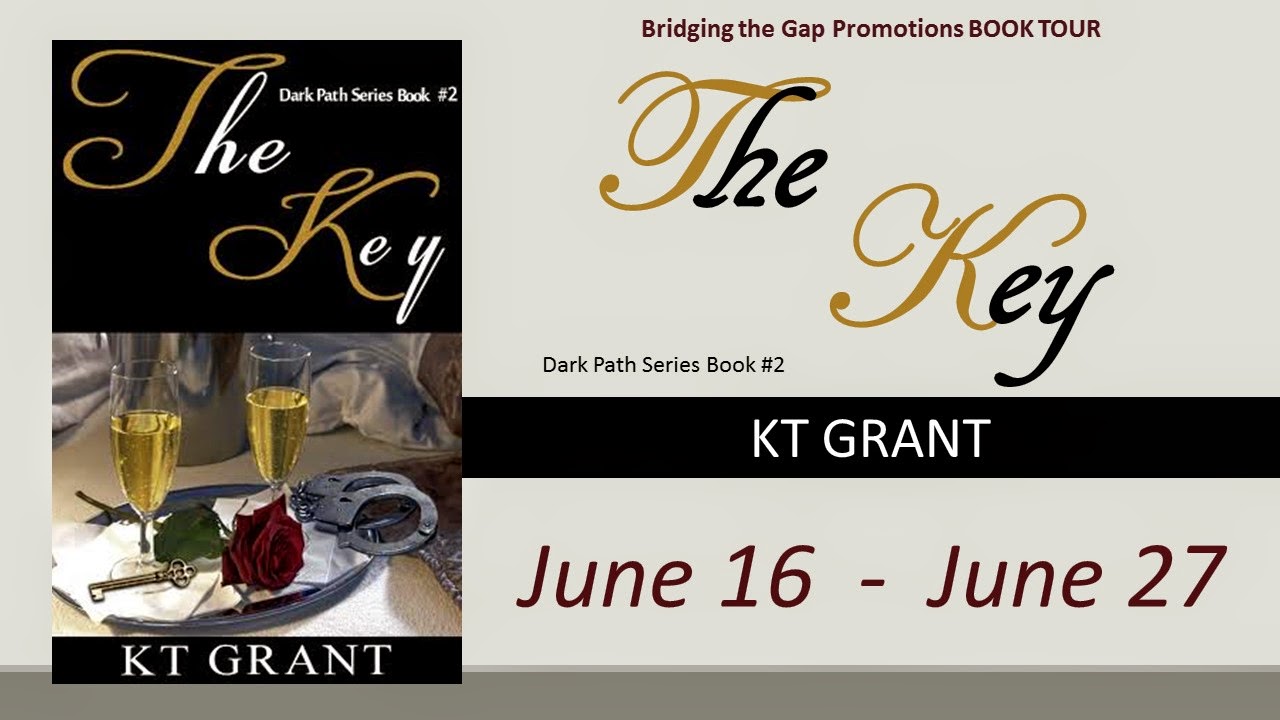 K.T. Grant is giving away 3 ebook sets of the first two books in the Dark Path Series,  The Gate and The Key ! Please use the RaffleCopter below to enter.

How did you first meet your writer?
Max: I invaded Ms. Grant’s mind one day while she was thinking of the perfect man. I whispered my name, Maxwell Crawford in her ear and she brought me to life in The Gate.

Did you ever think that your life would end up being in a book?
Max: Hell no! I’m an extremely private person because of my eclectic hobbies. I have more than a few enemies who would love nothing more than to bring me down and screw me over

What are your favorite scenes in your book: the action, the dialog or the romance?
Max: I think action speaks louder than words. I’m a hands on type of guy, especially with that special lady I want to seduce and take control of in and out of the bedroom.

Did you have a hard time convincing your author to write any particular scenes for you?
Max: I’m a force to be reckoned with and don’t like to be told, “no”. Me. Grant had some problems trying to keep my alpha tendencies with Erika under control. But she allowed some exceptions when it came to tutoring Erika as my submissive.

What do you like to do when you are not being actively read somewhere?
Max: I enjoy making money and relaxing at my sex club, The Gate. But when I have down times, I enjoy making dinner for Erika, the woman who owns my heart.

If you could rewrite anything in your book, what would it be?
Max: The moment I met Erika, I would have taken her to St. Thomas where I own property and married her there.

Do you like the way the book ended?
Max: I get what I want at the end of The Key, but there are some unresolved issues have to deal with still in order for me and Erika to be truly happy. Unfortunately those issues won’t be resolved until The Lock, the third book Ms. Grant is planning on write in 2015.

Do have any secret aspirations that your author doesn’t know about?
Max: There’s a part of me that wants to chuck it all away, take Erika and hide on some island where no one can find us.

What is your greatest fear?
Max: Loses Erika to my childhood nemesis, Chris Milton. I hate the fact Erika and Milton are friends and he was her first love.

What do you wear when you go to sleep?
Max: I sleep in the buff.

What is your most prized possession?
Max: Erika, my lady, and The Gate.

What do you think your greatest weakness is?
Max: I hate being vulnerable and not in charge of the situation.

What do you think is your strongest attribute?
Max: I can make most people do whatever I want. If I say jump, they ask, how high?

What are you proudest of?
Max: I can take down the competition and I always end up getting what I want.

What embarrasses you?
Max: When I’m caught biting my thumb nail if I’m nervous. Erika catches me doing that all the time. I swear that woman has a hidden radar.

What do you like most about where you live?
Max: New York City is the best city in the US. I have so many options available to me there.

What’s your favorite thing to do on a rainy Sunday?
Max: Making love with Erika.

What word makes you the happiest?
Max: Erika

What is your least favorite word?
Max: Milton

What turns you on?
Max: A woman’s moans of pleasure.

What turns you off?
Max: Whimpering.

What other profession would you like to try?
Max: College professor of English Literature

What would you not like to do?
Max: Not make money. I love making money and being rich so I never have to worry about where my pay check is coming from.

What is your most favorite memory?
Max: My mother singing to me and my two brothers.

Erika has reinvented herself as an author of erotic romance under the pseudonym, Lily Fredericks. After her eight month sabbatical in New Orleans, she’s returning to Manhattan to promote her new book. Chris is handling her book tour and wants Erika to give him another chance. She’s forgiven Chris, but Max is always in her thoughts. Sick of waiting for Erika to come to her senses, Max takes matters into his own hands. He’ll go to New Orleans to claim her before it’s too late.
With Erika back in Manhattan, both Chris and Max try to seduce her in the hopes she’ll choose one of them. As both men battle for her heart, a woman from Max’s past reappears, bent on revenge. Chris will ruin Max anyway he can in order to make Erika his own. However Max has something up his sleeve to insure he’s the victor, but not without a price—Erika’s soul.

The walk felt like an eternity but lasted mere minutes. When he reached the corner of his hotel, he placed Erika on her feet. Swaying, she latched onto his arms. He spotted the nervousness in her eyes, and his chest tightened.
As he set his lips on her forehead, he cupped her face. “There’s nothing to be afraid of. I won’t do anything you don’t want me to. You say stop, and I will.”
She spread her palm over his rapidly beating heart. “Does my safe word still apply in this situation?”
“Yes, but only because it’s adorable when you scream ‘whiskers’ when you come.”
She smacked him in the stomach. He curled his arm around her waist and flicked the tip of her nose with his tongue. Her face colored an adorable pink.
He started walking backward and linked her hands with his. “Will you come up to my room and spend the night with me, Miss Walsh?”
She dug the edge of her front teeth into her bottom lip and tilted her head, acting shy. “What if I want you to be gentle with me, Mr. Crawford?”
He stopped and almost coughed as his breath caught in his lungs. “If…if that’s what I have to do in order for you to be with me, then yes.”
She lifted their combined hands, slipped his thumb inside her mouth, and sucked.
His dick jerked. That familiar tingling in his lower back spread around front and disembarked between his thighs.
“Enough,” he snapped and drew his thumb out of her mouth. He rubbed her saliva across her bottom lip. “Give me your answer. Now.”
She presented him with a smile worthy of an experienced seductress. “Yes.”
The walk across the lobby took too long for Max. Erika purposely taunted him by not rushing. He would have carried her in his arms like he had on Bourbon Street, but he needed to remain in control. He always stayed at the Hotel Monteleone while in New Orleans, and he didn’t want that to change. He kept his frustration at bay while she viewed the splendor, spying the lounge off to the right and the slow moving carousel inside making up the bar.
“Oh, my God, it’s a real carousel? And it moves?” She stepped toward the room, her face full of awe.
“At night, they have piano music and live singing. Next time I promise we’ll sit at the bar.” Hooking his arms around Erika from behind, he rested his chin on her shoulder. “But unless you want me to fuck you on top of the bar, we should go up to my suite as soon as possible.”
She laid her palm on his cheek and gave him an amused glance. “If we don’t, will you jizz in your pants in front of everyone here?”
He dropped his head into the crook of her shoulder and held back a laugh. If only she knew how close he was to losing it. “Put me out of my misery, and let’s go upstairs.”
She turned and, grabbing his hand, hurried to the set of elevators. She giggled loud, the sound of her joy echoing off the walls.
A few people loitering, including those behind the front desk, sent Erika and him curious stares, but he didn’t care. He chuckled along with her. When they reached the elevator doors, he pushed aside her hands, so he could punch the button first. She gave him a playful pout. He returned the favor by cupping her ass and squeezing her generous flesh.
“We’re grabby tonight, aren’t we?” She brushed up against him.
He continued caressing those two marvelous muscular globes, exultant her weight loss hadn’t affected her posterior. “I can’t stop touching you.”
“How about kissing me?” she whispered. When the elevator doors open, she yanked him inside by his collar.
He slapped the button to his floor then pulled Erika into the corner. He snuck a peek behind to see if anyone waited to enter—not that he would have allowed another inside. Once the doors slammed shut, he claimed Erika’s mouth, feasting on her lips, drunk on her taste.

KT Grant is a self-proclaimed eccentric redhead who not only loves to read a wide variety of romances, but also loves writing it. Under her alter-ego, she is a well-known book blogger who doesn’t shy away from voicing her opinion. A proud native of New Jersey, KT is multi-published and writes Gay, Lesbian and Straight romance. KT has been a top ten best-selling author at Amazon, as well as being a multiple All Romance Ebooks best seller and a Night Owl Reviews Top Author Pick.

KT loves to hear from readers. You can drop KT an email at ktgrnt@gmail.com.

You can also find KT at these fun places:
Blog: Babbling About Books, and More!
Twitter: @Katiebabs
Facebook
Goodreads