THE AUTHOR WILL BE GIVING AWAY a $25 Amazon gift card to the commenter who leaves the best question or comment during the tour. To increase our chances of winning please visit the other tour stops. You may find those locations here...  http://goddessfishpromotions.blogspot.com/2014/04/virtual-book-tour-wildflower-by-alan.html

Crystal: Today as part of this Goddess Fish Promotions Virtual Book Tour, I have the chance to ask Kyle Taylor  a few questions. Welcome Kyle, I'm so happy to have you here today. Would you share a little bit about yourself with us today?

Kyle: Kyle Taylor is a fictitious writer who first debuted in the novel, Billion Dollar Dreamer. He writes for a prominent gay magazine and has won numerous awards for his efforts. Rumor has it Kyle grew up just down the block from Anderson Cooper on the Upper East Side. They were never lovers, but Kyle will admit the two did babysit Ronan Farrow. Kyle loves to answer such questions in the third person, by the way.

Crystal: Where did you come up with the idea for Wildflower? Kyle: I came across an item about him in the local paper, and I thought to myself, you’ve got to be kidding!  How did a boy who grew up picking cotton in small town Round Rock, Texas become a scandalous drag sensation headlining at the Moulin Rouge? The more I read, the more I wanted to learn. Then I started to think the story would make a great part of a book. I was actually going to have a parallel contemporary story along with that of Barbette’s. But the more I researched, the more I realized Barbette story had to be told on its own.

Kyle: After writing three novels in three years, I’ve decided to take the summer off.  I will only be writing articles for an architecture magazine. Beautiful spaces are very soothing.

Kyle: Yes! Wildflower was a far more complicated undertaking than I estimated. I would look at my scene outline and realize I needed to better understand the people and places in Barbette’s life. I researched in the evenings and then wrote in the mornings, if I felt I was ready.  There are all sorts of quotes and actual dialogue peppered into Wildflower. It was relentless.

My house was very clean though. I have this OCD thing about making sure my house is spotless before I write.

Kyle: The whole story of Wildflower covers sixty years of a man’s life. He moves into and out of so many worlds and circumstances. The research was extensive and at times frustrating. You are always wanting more details.  You are always trying to reveal the inner truth of the character even in historical fiction.

I thought the whole of the nineteen thirties of Barbette’s life was lost to time until I discovered accounts from Barbette’s work on Billy Rose’s Broadway show, Jumbo.  Rose was married to Fanny Brice. He was an unctuous impresario with a foul mouth but was enormously successful.  Anyway, I came across the only known film of Barbette actually performing in a promo piece for Jumbo.  Here it is: http://www.frequency.com/video/barbette-december-19-1898-august-5-1973/115079354/-/5-5961174


Crystal: Who are some of your favorite authors that you like to read?

Kyle: I’m naturally attracted to things like Hillenbrand’s Seabiscuit and Larson’s The Devil in the White City. I love the interplay of history and drama.

Kyle: Yes! Both Wildflower and Exposition are very cinematic. I would love to write the screenplays for each!

Kyle: Vander Clyde Broadway, a.k.a. Barbette, lands in the big time, playing a review in Paris in the early 1920’s. One night three miscreants barge into his dressing room late after the show and introduce themselves.  They are surrealist writer and artist, Jean Cocteau, his lover the writer Raymond Radiguet as well as a preposterous bear of a woman, Princess Violette Bonaparte Murat.  They whisk Barbette away for a nocturnal madcap tour of Paris in Violette’s yellow Citroen. The streets are deserted. Radiguet is driving. Cocteau continues to produce more bottles of booze from his undercoat and trousers. All the while in the back seat next to Barbette, Violette is grandly expounding on her Napoleonic lineage. They somehow halt the car at the Arc de Triomphe and all stumble out. Cocteau and Radiguet are caught up in a passionate kiss. In that moment, with the sweep of Paris around him, Barbette realizes this world is so different from what he has known and he’s thrilled!

“Arrêtez la voiture! Je crois que je vais vomir!!” Princess Violette Murat shouted in her high-pitched voice as the freezing-cold air of the Parisian night blasted through her short, bob cut hair. Her corpulent frame, ensconced in an ample, monkey fur coat was plunked down next to Vander Barbette’s in the back seat of her brand new, bright yellow, Citroën automobile.
“Parler anglais! Parlez anglais vous gouine graisse!” Jean Cocteau shouted back at her from the front passenger seat of the car as it swerved and darted down the empty boulevard of the Champs-Élysées some time past three in the morning. “Speak English! You fat dyke!”
Raymond Radiguet laughed hysterically from his vantage behind the wheel. His foot put more force on the accelerator pedal. The car increased speed, careening toward the massive roundabout encircling the Arc de Triomphe. The car entered the roundabout and continued its ridiculous path.
“Stop or I will vomit!” the princess protested. The yellow automobile swerved up to the curb and Radiguet slammed on the brakes. Without a moment’s hesitation, Violette Murat swung open the door to the automobile, stepped out past the running board and promptly upchucked into the gutter. Her ample body, sheathed in fur, silhouetted by the arc lights aimed at the massive, triumphal arch before them, made her look like a foraging bear in a forest clearing.
Cocteau and Radiguet burst out laughing. They exited the automobile, Cocteau taking with him a half-full flask of whiskey.
Vander Barbette hopped out of the back seat and went over to Violette who daintily wiped her lips with an embroidered kerchief.
“Are you okay?”
“Oui!” she said coming to her senses. She looked up at the Arc de Triomphe, in the cold, clear Parisian night. It looked down at her with its white marble reliefs, stoically silent. “I am sorry my great grandfather Napoleon, for such debasement!” she said. She brought her fingers to her lips. She kissed them and then raised her hand as if she was blessing the arch in a benediction.
“I am sure he well heard you!” Cocteau called back at them. He and Radiguet were huddled together, closer to the famous arch. “I love Paris!” Cocteau exclaimed.
They were alone in the circle at this hour. Not a single automobile or truck entered the expansive round about. In the distance, a searchlight, beaming from the top of the Eiffel Tower, swept over the city cutting through the blackness of the night like a sharp knife. Cocteau took Radiguet’s head in his hands and kissed him passionately on the lips.
Vander’s mouth was agape.
Violette Murat laughed as she and Vander approached them. She sighed, “Look at the two lovebirds! So pretty, so adoring!”
Vander couldn’t take his eyes off the men.
“Have you found a man yet?” Violette asked Vander, her eyes innocent and interested.
Vander was taken aback by her presumption. No one ever asked him such a question so openly before. Without formulating a more explicatory response, he answered sincerely, “no.”
Violette happily patted Vander on the back. “That is okay, you will!”
Vander’s gaze remained on the two men kissing a few paces from them. He could not believe the two were so passionate out in public! It astounded him and excited him all at once. He felt a flash of emotion—he wanted to be a part of their display.
“They are cute, aren’t they?” Violette laughed. “Our two little finches!”

“More fun than a sex party!” 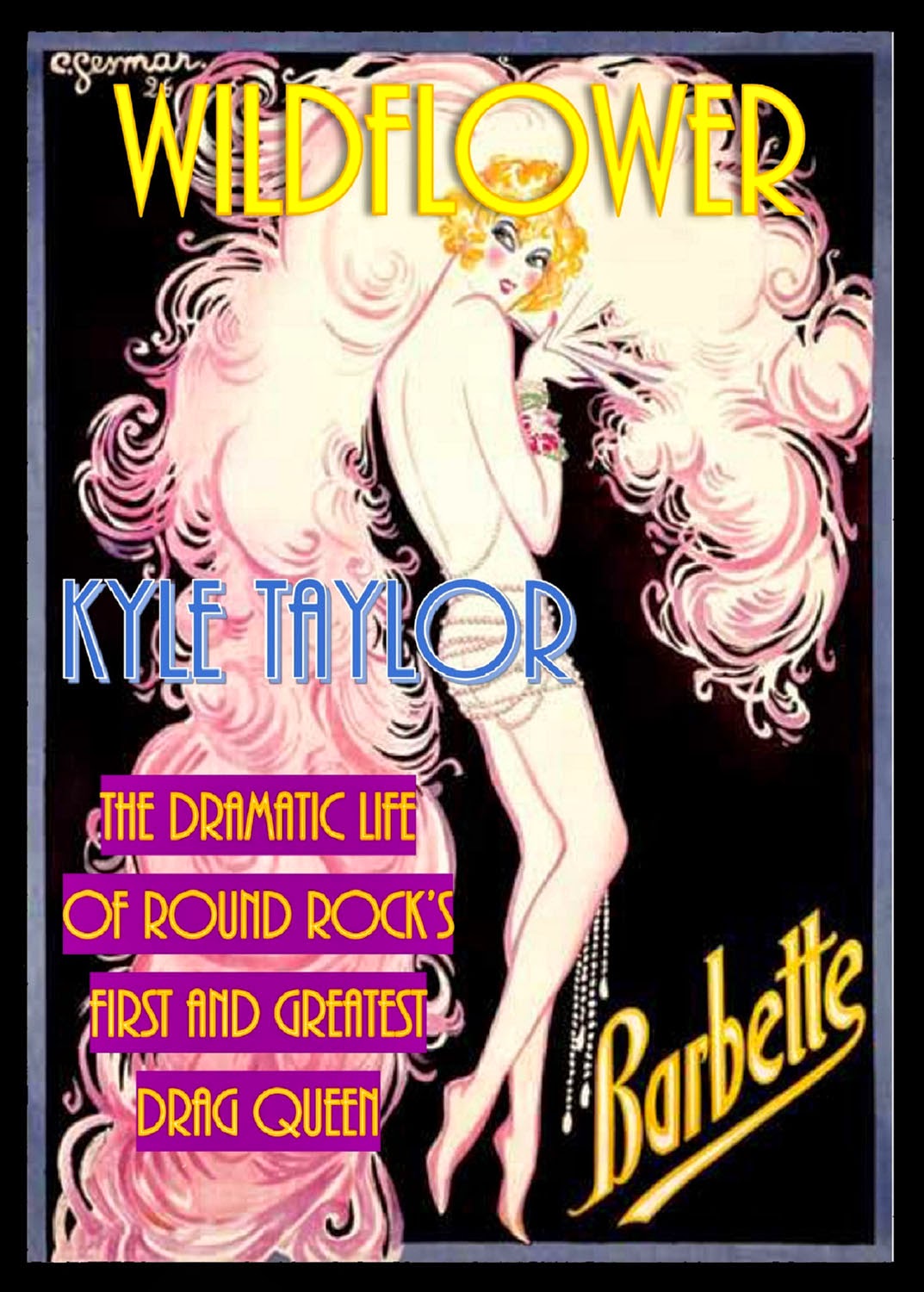 Long before Ru Paul  eyed his first pair of six inch stilettos or Boy George donned his colorful caftan, a handsome young man from the small town of Round Rock, Texas barnstormed the stages of Europe’s most lavish theaters and night clubs as Barbette, a beautiful aerialist drag queen who became a scandalous sensation throughout the Roaring Twenties.

From a child who picked cotton and walked his mother’s clothes line to headlining at the Moulin Rouge in spectacular drag,  Wildflower reveals long-forgotten secrets of this enigmatic performer: his arrest in London on morals charges, his bout with polio, his infamous collaborations with some of Hollywood’s greatest stars— Orson Welles, Vincente Minnelli, and Judy Garland, Jack Lemmon, and Tony Curtis as well as his hidden affair with French surrealist  Jean Cocteau.

Wildflower captivates with every page, dramatically revealing the startling and at times heart-breaking story of Round Rock’s first and greatest drag queen.

“You need to take a French lover. It is how you will learn quickly,” Princess Violette said instructively. Her voluminous frame rested on a simple wooden chair, similar to the one Vander sat at in front of his vanity—her girth permitting her to only sit like a man, with her legs open, the heels of her shoes flatly on the floor.
“Yes, preferably one with a mustache!” Radiguet joked.
Vander’s face colored.
“Ah, look he blushed!” Radiguet laughed robustly.
Jean Cocteau grew more serious as he looked intently at Vander.
“I must confess, I have seen your show many times in the past week. You are an angel, a flower, a bird.”
“Oh dear!” Radiguet rolled his eyes.
“Please!” Cocteau turned to Radiguet his eyes darting a flash of anger. Radiguet slumped into the armchair, knowing when Jean Cocteau had a point he wanted to make he would not tolerate distractions.
“I have written a review. It shall be published tomorrow, but I wanted to come back here tonight, for what I have written in it, I can only say to you personally—tonight’s performance was again confirmation of my earlier impressions.”
Vander nodded toward Cocteau apprehensively as the Frenchman pulled from his coat a couple of sheets of scrawled manuscript. He started to read from them:
“The curtain goes up on a functional décor—a wire stretched between two supports, a trapeze, and hanging rings. In the back, a sofa covered with a white bearskin.”
“I love the bearskin!” Radiguet smiled, but Cocteau immediately silenced him with his hand as he continued to read from his manuscript.
“Barbette enters adorned in ostrich feathers and a flowing lamé evening gown. As he removes his evening gown, he begins to perform a scabrous little scene—a real masterpiece of pantomime, summing up in parody all the women he has ever studied, becoming himself the woman—so much so as to eclipse the prettiest girls who precede and follow him on the program. Bursting on the audience as a ravishing creature he throws his dust with such force that from then on he is free to concentrate on his wire work, in which his masculine movements will help him instead of giving him away. He is no mere acrobat in women’s clothes, nor just a graceful daredevil but one of the most beautiful things in the theatre.”