Giveaway: $10 Evernight Teen Gift Card. Please use the RaffleCopter below to enter.

Crystal: Today Megan Gaudino has stopped by to celebrate the release of her book Always Kiss Me Goodnight. Welcome Megan! I'm so happy to have you here today. Would you share a little bit about yourself with us today?

Megan: Hi! I’m Megan Gaudino, I’m the author of Always Kiss Me Goodnight. My story was originally posted on Wattpad.com and has gained over two million reads so if there are any Wattpad friends out there KEEP WRITING! I work in a high school library and love that I get to spend my day with fellow bookworms surrounded by novels.

Megan: The sequel to Always Kiss Me Goodnight. I’m not quite ready to leave Sophia and Leo yet. The whole thing is actually written and I had a blast exploring their relationship so right now I’m really trying to get in there and edit. Sequels are great because writing them is like visiting an old friend. I missed Sophia and Leo so it’s been a fun time getting to know them all over again.

Crystal:  Where did you come up with the idea for for either your current release or the WIP you are working on now?

Megan: The idea for Always Kiss Me Goodnight came from the question: Is your fate is predetermined or does it change daily with every decision you make? This book really explores what it means to believe in fate and what happens when you go against it. Sophia’s life is in danger but Leo steps in and changes everything forcing Sophia to explore the role fate plays in her life.

Megan: There’s nothing specific I like to eat while writing but I do love to drink lime water out of a mason jar with a bendy straw too, of course. If i don’t have the straw forget it!

Megan: In chapter twelve Leo takes Sophia to his house for the first time and it’s a scene that really solidifies their relationship. In order to get to Leo’s house they have to trek through the woods, then after a series of obstacles, they end up in a sandstone cave. Sophia is a huge fan of caves, crystals, and rock formations in general but tends to keep this to herself. However when Leo brings her to this cave she is overwhelmed with it’s beauty and she and Leo share this magical moment.

Megan: I love to read as much as I can when I’m not writing, that’s a given, but I also never pass up an opportunity to take a road trip. I’m obsessed with Instagram so I love going to explore different places and taking pictures. It’s amazing what you can find just a few hours away from home. Plus, it’s a great way to get inspiration for my writing.

Megan: Yes! Haha. I need noise while writing and it could be almost anything. Having the TV playing in the background is always convenient so I’ll usually put on Friends reruns that I’ve seen probably at least ten times so it’s not a distraction and more just like white noise. I can’t have music playing unless it’s classical and has no lyrics because I always find myself singing along.

Crystal:  Thank you for visiting today. It has been a pleasure to visit with you. Is there anything else you would like to share with us?

Megan: Thank you so much for having me! You asked some really fun questions and it was a pleasure to answer them. 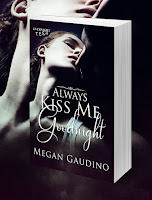 Sophia Destino is supposed to die.

All seventeen-year-old Sophia wants is to coast through her junior year. But with her parents obsessed with her Olympic-swimming-hopeful brother, a psychic best friend with a penchant for reading tarot cards, and prophetic dreams that predict her death—that won’t be easy. As her nightmares begin to come true, Sophia finds herself dodging death and longing for the time when getting over her ex-boyfriend was her biggest problem. Until she meets Leo Knight. The mysterious stranger seems determined to keep her alive—and steal her heart. But Leo has a secret that is about to change everything and Sophia is about to learn that sometimes…your number is up.

What a waste last night was. I would’ve laughed out loud
about how tragically ironic it all was if I could have. My lungs started to
twinge at the thought of laughing. They wanted to be filled with fresh air.

The finale of my life was playing out before me. I recalled
the peaceful feeling from my dream. I was just waiting for it to happen. My
lungs were screaming at me to breathe. This was it. Time was almost up and I
was waiting for my life to flash before my eyes when movement out of the water
caught my attention. Leo was standing on the edge of the pool. He was shirtless
and surrounded by the light, making me question if I’d died and gone to heaven.

He dove into the pool an instant later and scooped me up in
his arms, obelisk and all, just as he had the night before, then pushed up to
the surface of the water in no time flat.

The extra couple hundred pounds of weight I and the
obelisk—mostly the obelisk…I think—added did nothing to slow him down. We shot
out of the water as if we had the help of a cannon, not just Leo’s legs.

I gasped for air as soon as my face was free of the water.
The breath felt so good my lungs craved more and more. I kept inhaling the air
as if it were being funneled down my throat.

Leo swam to the side of the pool, using only his legs to
keep us afloat. With one hand, he threw the obelisk all the way in the bed of
wildflowers and pulled us up out of the water.

We sat on the edge of the pool with his feet in the water
and me on his lap, vowing to never again take air for granted and wondering
what happened that made my dreams start coming true.

Using his thumbs to push the water out of my eyes, he laced
his hands through my soaking wet hair and rested his palms on my cheeks.

“Sophia?” I coughed up some water and he turned my head to
the side. “Sophia, are you okay?”

The air was flowing easily in and out of my lungs. They felt
calmed; they knew they would be getting air on a regular basis.

“I’m okay.” I coughed one more time, then took another deep
breath to clear my reeling mind and tried to speak again. “I’m fine.”

Physically I was fine but mentally I wasn’t. The world I
lived in up until this point didn’t consist of anything supernatural or
unexplainable happening except the occasional perfect hair day and the beauty
of an aquamarine crystal.

Leo stood easily from his seated position with me still in
his arms and crushed my chest to his. Of course I couldn’t help but wrap my
arms around his bare torso but his skin felt so hot to the touch. Between the
freezing cold of my body and the warm temperature of his I felt overwhelmed.
Everywhere our bodies came in contact with each other little puffs of visible
steam arose.

When we made it to the living room Hercules began lapping up
the puddles of water we left behind us. Leo yanked the gray blanket off of the
armchair and wrapped it around me because I was suddenly shaking.

He moved a salt stone lamp out of his way and sat on top of
the coffee table, motionlessly taking in my expression. Before he even spoke I
just knew he was reading me all wrong. I felt like I could read him already
too.

“For what? My idiotic carelessness or that you saved
my life once again? You shouldn’t be sorry about either of those
things.”

“I shouldn’t have let that happen. I shouldn’t have been
sleeping still. I promised you I’d protect you and look what happened. Do you
have any idea how close you were to dying? Even closer than you were last
night. If I was just one second later I would’ve been too late.”

“I know. I was there. But you weren’t too late. It’s all over
now—I’m fine.” He put his head in his hands and scrunched his hair in his
palms. “Leo.” I reached forward and placed my hand on his arm. He was still so
hot to the touch. “Why’s your skin so hot again?”

He flinched away from my hand, stood up, folded his arms
across his chest and turned his back to me. His reaction made me question my
gesture.

“Yeah but why does it happen at all?”

He hesitated for just a moment before he answered. “Because
I keep saving your life.”

“I thought angels are supposed to save lives.”

“I already told you. I’m not an angel. I’m not supposed to
save lives.” 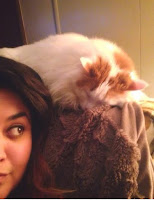 Megan Gaudino works in a high school library by day and
on her own books by night. Always Kiss Me Goodnight his her debut novel and was first posted on Wattpad where it gained over two million reads. Megan lives in Pittsburgh where you can find her reading, writing, and Instagramming.