What You Won’t Do For Love
By Keleigh Crigler Hadley

Crystal: Today I have the pleasure of hosting Keleigh Crigler Hadley. Welcome Keleigh! I'm so happy to have you here today. Would you share a little bit about yourself with us today?

Keleigh: I’m a girl who loves to see God work.

What You Won't Do For Love
Chapter 1
“A hard head makes a soft behind.” That was the second to the last thing, Edward Price said to his only child, Eden. “So make wise choices using your heart, soul and mind.” The last thing he said, as his lungs rattled and he struggled to breathe was, “Take care of people, especially your mother.”
Back then, those were two difficult tasks to place on Eden’s fifteen year old shoulders, and eighteen years later, she was still struggling to comply.
Now, Eden stood, dressed in her favorite green scrubs in front of the vending machine, next to the triage station at New Mercies Hospital and contemplated her father’s dying advice.
She tapped her chipped fingernails against the glass. She had achieved part of her father’s dying wish – she had become a nurse and lived to help people.
But she seemed to fail in the second part, since she was behind in her payments to the run-down convalescent home her mother was living in.
As for the second to the last thing…
Should she get the Kit Kat or the Mars Bar? Tough choice. They both would give her a softer, bigger, behind which she didn’t need. God had already given bountifully in that area. It’s the reason Eden wore a medium scrub top and a large scrub bottom. Her blessing and her curse. Eden sighed, blew a stray strand of curly auburn hair out of her face and slid a dollar into the machine. She keyed in E6 – the granola bar.
Happy daddy?
But before the proper choice could fall, the emergency room doors glided open with a hiss and a young woman stumbled in with a semi-conscious older woman.
“Help me!” Before the young woman collapsed onto the yellow tile floor, she locked eyes with Eden and conveyed such a look of unknowable fear, Eden’s palms began to sweat.
Eden’s body became a cauldron of tension. Her heart revved into overdrive, adrenaline flowed and her hunger forgotten as she scrambled to get a gurney.
“The Pit is hopping tonight!” Another nurse exclaimed in response to the unusual number of critical cases, they had seen that night.
“Can you tell me your name?” Eden helped the young lady onto the stretcher as the rest of the team assembled. Working swiftly and at life-saving speed, they placed both women on separate gurneys.
As nurses checked her heart rate, blood oxygen, and breath sounds, Eden tried to get some information from her.
“This wasn’t supposed to happen.” The young woman ran her fingers through her greasy and stringy brown hair. Her words spilled lazily out of her mouth. “Today’s my birthday. See?” The woman tried to point to a button in the middle of her shirt, but her aim was off and her finger landed on her chin. The button read, ‘Keep Calm, It’s Michelle’s 21st Birthday.’ “This isn’t right,” she slurred. “It’s my birthday!” She squinted her eyes as the bright overhead lights swung into place and the medical team began to poke, pull, prod and place things.
Eden leaned closer and was almost knocked over by the pungent smell of alcohol. It was so strong it made her eyes water.
Eden turned to look over at the older woman, still unconscious on the gurney and saw another nurse scrunch her nose at the smell coming from her. In the pit of Eden’s stomach she knew death was close.
“Michelle, is that your name? Can you tell me what happened to your friend?”
The young lady wobbled her head back and forth. “Not my friend. That’s my mama.” Michelle stretched her hand out. “Mama!” She wailed.
Eden exchanged a glance with her best friend, Kym Chan, a Physician’s Assistant. Kym held up a blood alcohol meter that read .092, several points higher than the legal limit. Eden glanced over at the mother, whose skin has a light blue tinge, on the other gurney. Her alcohol level was .291. Her body was drowning in alcohol.
“Alright, what happened to your mother? What have you been drinking?”
“Her name is Grace,” Michelle’s red eyes began to water as her face contorted into pain, “and she’s amazing!” Then, her face morphed again and Michelle smiled and blinked slowly. “That’s the line she always gave cute guys.”
“What do we have here?” An attendee walked in as she applied gloves to her hands.
A resident piped up, “The patient presented with blue tinged skin, hypothermia, and traces of vomit around her mouth. It looks like a case of severe alcohol poisoning. The older woman’s blood sugar levels are non-existent, and she’s unresponsive to pain stimuli.”
Michelle suddenly began to strain against the nurses attempting to start an I.V. She moaned again, and this time it was low, guttural and laced with regret. Eden knew she was going to hear that wail in her sleep tonight.
******************

Crystal: Where did you come up with the idea for What you Won't Do For Love?

Keleigh: The title went through a metamorphosis. :)
1. How to Kill Your Husband: Step One
2. Favor Ain’t Fair
3. The Things We Do For Love.

Keleigh: I researched assisted suicide/euthanasia and the pros and cons.


Crystal: Is there a genre you haven't written that you would like to try?

Eden Price, an unlucky-in-love nurse finds herself in the midst of a heated love triangle. Globe-trotting missionary, Gabe Clark ignites her soul. Who doesn't want a man with a connection to God?  Hard-working, Nemo Gates speaks to her heart. His past has caused a rift between him and God and Eden wants to help him heal.
She ultimately chooses the man that makes her passions come alive, butdid she make the right choice? Her husband stuns her with a desperate plea; to prove her love for him in the most unthinkable way - to help him die with dignity.

“There goes that Price girl again.” Verdeen Washington exclaimed to her hard-of-hearing sister, Pearleen. They rocked in unison, in the twilight air on their front porch.
Eden Price noted the puzzlement in Verdeen’s booming voice as she steadily passed them by. Heck, the whole neighborhood could hear it.
“She’s a strange bird, if I ever saw one.” Pearleen looked over her thick glasses and pursed her wrinkled lips.
“Good evening, Washington sisters.”
Eden smiled, nodded and kept her legs pumping. She knew they shook their gray wigs as she passed them, but her jogging pace didn’t diminish and she kept on singing.
She knew she was a sight to see and hear.
“Wishing, and hoping and thinking and praying...
planning and dreaming each night of his charms…”
That’s it, Dionne.
Eden sang the tune to Dionne Warwick’s 1950’s classic song. The lyrics had been stuck on repeat in her head all day and the only way to get a song out, is to sing it. So in between breaths, she belted out the infectious tune.
So Dionne, is this the formula for catching a man?
The cushion in her Nike trainers flattened and rebounded as she reduced her pace from a slow jog to a brisk walk. She was two blocks from home and needed to start her cool down.
“...do the things he likes to do… wear your hair just for him… 'cause you won’t get him,
thinking,
and praying,
and wishing,
and hoping...”

Her worn out sports bra allowed too much jiggle and wiggle room for her girls. She could never hope to get a good run in anymore wearing three year-old running shoes and a five year-old bra, but budget constraints did not allow for such luxuries.
Eden adjusted ‘Ben and Jerry’ again to the safe confines of her bra, before she was arrested for exposing herself. Eden hunched over for a moment to catch her breath. Just a few more feet to go. She righted herself, hit her corner, and turned at the intersection of Third ave and 33rd place.
Three threes. The number meant something to her father, God rest his soul. It was his favorite number and one of the reasons he purchased a house on this block. But today, the number three held relevance to Eden too.
This was her thirty-third year of life, she was suffering from her third night of insomnia, and on March third, in three days her life would change - “for better or worse. 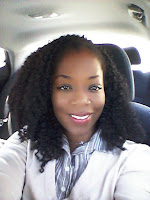 Keleigh Crigler Hadley is an author, speaker, and teacher who is thankful God can use her messes for His glory.
She has always loved stories, and she believes the story of the Bible contains the biggest, the most redemptive dose of grace humankind has ever, and will ever, experience. She is the Christian Fiction author of the Preacher's Kids series, Revenge Inc., and What You Won't Do for Love with Brown Girls Faith.
If she were to define herself in one sentence, she would say, "I'm a girl who loves to see God working."  Keleigh writes soul-stirring fiction, with real characters that stay with readers long after they have closed the book, (or turned the e-reader off.)  The only thing she loves more than writing is reading, so contact her on social media and let her know what you're reading!