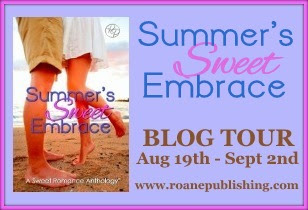 Giveaway: paperback copy of SSE and a $10 Amazon Gift Card. Please use the RaffleCopter below to enter.  Please be sure to stop by the other tour stops. You may find those locations here...

Description: Summertime love is always the sweetest. These eight sweet tales of summer romance are the perfect companion for a day at the lake or the beach.

Waiting for the right one can be torture.

Too bad for Hailey, impatience got the best of her. Finding Mr. Right in time for a destination wedding couldn’t happen fast enough. Instead of listening to reason, or rather her friends, she’s stuck in paradise alone, again. Nothing ruins a tropical paradise faster than catching your date with another woman.Justin’s ready for a change. He’s been caught up in his own success for too long and is looking to finally settle down. Timing is everything and his cousins wedding is the perfect start of his new life. His luck is changing with the captivating mystery woman on the beach.  Now all he has to do is find her, before he agrees to his family’s match making plot.

Carly Dawson, 18, is facing her last summer before leaving for college, all alone. Still nursing a broken heart over the loss of her boyfriend, Chase Montgomery, she wants the next two months to be different. A shocking unexpected visitor one night just may offer Carly the excitement she seeks. Her only decision is whether or not to choose what this visitor offers her.

The Beach Rose By Christa MacDonald

Annie Thomas can’t believe her good luck when she inherits the family’s beach house in Oceanside Maine.  It’s one of the few places she was truly happy so she sells everything she owns, quits her job, and moves in hoping that her new business, The Beach Rose, will bring in enough money in its first season to let her live up there year round.  But on her first day things aren’t as easy or as simple as she’d hoped.  To cap it off she discovers that her best new client is actually the boy she had a huge teenage crush on.  So much for rekindling a summer romance.

For Craig, Annie was everything he wanted when he was a geeky seventeen year-old.  Now that he’s pushing forty and the owner of half the real estate in town, he wants another shot at convincing her that he’s everything she needs.  He didn’t count on her owning the business he just signed a contract with though.  Craig has to find a way to help Annie’s struggling business without her knowing it since anything else would push her further away and that’s the last thing he wants.

Together they may get a second chance for a summer romance.

When the Sea Swallows the Sun By Kim Strattford

A trip to Clearwater Beach was supposed to be a fun escape from the D.C. rat race for Emma and her boyfriend Sam.  Until Sam dumped her, leaving her with a ticket she was too cheap not to use and a resolution to enjoy her time in the sun and get over him.  A plan that sputters when Sam’s good friend Rick shows up.  Rick, who’s never seemed to approve of her for reasons she’s never understood.  Rick, who seems to think he has license to bug her just because he bought Sam’s ticket.  Rick, who may be a much nicer guy than she ever realized, and who might have a very good reason for not thinking much of her.  Can they make peace in the beautiful Florida sun and surf?  Peace—or maybe more?

What if fate pushed you to make a choice between keeping a promise and revealing a truth? After her grandmother’s death, she opens an unexpected letter containing an unwanted request. Isabel feels obligated to honor her grams final wish. In the process she risks losing the man of her dreams.

Six months before their marriage Isabel reveals a time bomb that will forever change their lives. He loves her but the betrayal of not trusting him weighs heavy on his heart. Trust means everything to Seth.

One ring, journal, box, spirit, and flower will teach everyone the power of commitment and the importance of honesty.  Secrets left buried will always haunt the living, a life lived truthfully leads to happily ever after. Will Isabel and Seth realize this before they are doomed to replay the mistakes of the past?

Tired of the vacationers hitting on her, surf shop owner, Skye Taylor quits dating. In walks the cocky, Harley Nicholson from Idaho. She’s not open for another summer fling. Can he convinces her to give love a chance?

Harley sees Skye shooting through the Huntington Beach Pier on her surfboard. Mesmerized by the woman’s connection with the wave, he sets out to meet the brazen surfer. He bets his cousin that before he leaves in three weeks, she'll be his.


Skye’s life is kept busy running the Epic Surf Shop and training for annual surfing contest. The handsome, buff Idahoan interests her, but she doesn’t want another disastrous summer fling. Harley charms her into giving him a surfing lesson, woos her with moonlight strolls, and coaxes her with sweet gestures. Skye discovers Harley’s betrayal. She refuses to see him or hear his explanation.

Miserable, Harley must do something monumental to win her back. Will Skye ever forgive Harley?

Tracey Thompson isn't like most twenty-year-olds. She's looking forward to settling down and marrying her soul mate, Noah Martin. Even though their love bloomed when they were just little kids, they never doubted it and never looked back.

When a tragic accident separates Tracey from Noah, she struggles to go on without him. As the days wear on, she becomes aware of a chance for them to be together once again. All she needs to do is understand what tore them apart in the first place. But, overcoming this is harder than it seems. Will she be strong enough to find her way back to him?

Above Reproach By Sheryl Winters

Executive Secretary, Margaret Simms should have had it all. An apartment on the beach and a job at Reynolds Ad Agency, working for her best friend and business mogul, Garrett Reynolds.

A one night stand leads to a pregnancy and a re-evaluation of her life goals. In reality, Margaret's always hated her office job and culinary school is her life dream. But that too is ripped away from her when Garrett, her best friend and father of her child, develops cancer.

Obligation forces her back to the work she hates. When office espionage threatens her life, Margaret finds she must make a choice. Stand up for what she truly believes in or lose all she's ever wanted.

A trip to Clearwater Beach was supposed to be a fun escape from the D.C. rat race for Emma and her boyfriend Sam.  Until Sam dumped her, leaving her with a ticket she was too cheap not to use and a resolution to enjoy her time in the sun and get over him.  A plan that sputters when Sam’s good friend Rick shows up.  Rick, who’s never seemed to approve of her for reasons she’s never understood.  Rick, who seems to think he has license to bug her just because he bought Sam’s ticket.  Rick, who may be a much nicer guy than she ever realized, and who might have a very good reason for not thinking much of her.  Can they make peace in the beautiful Florida sun and surf?  Peace—or maybe more?

“You had a mask on that night, and I’d had too much to drink, so if you told me your name, I forgot it. I was living a little on the edge back then. It was an eye opener, being that sick—I won’t gross you out with the details.” She swam a little closer. “For what it’s worth, I was really pissed off that I couldn’t remember who I kissed. You were a good kisser.”
“I still am.” His smile was tighter than before.
“You’re mad?”
“You didn’t think to ask who I was?”
“I asked Amber. She didn’t know.”
“Why didn’t you ask Layla? She invited me.”
“I did ask her. But my powers of recall were a bit compromised when I described you. And it’s not like you went over the top on your costume other than the damn mask. You and half the guys at the party were in jeans and a black T-shirt and a black mask: the little to no effort gang.”
He seemed to concede her point with a nod. “Whereas you were very memorable. That gypsy outfit was amazing. You wore the same thing to Sam’s Halloween party this year. And the same perfume.”
“It’s my go-to Halloween outfit.” She realized that was when he’d started to act disapproving around her. “Why didn’t you say something?”
“Like what? I’m the random guy you might have hooked up with if you hadn’t been so drunk.”

Kim Strattford lives in Northern Virginia (yes, the “northern” is important) and grew up on romances of all sorts, courtesy of her mother, who let her read romances (perhaps a few years before she ought to have).  Victoria Holt, Mary Stewart, Elizabeth Peters, and Norah Lofts were particular favorites (yes, Kim is that old).  Kim recently retired and has turned her eye toward writing her own romances.  She has stories published in Powerless Against You: A Romantic Superhero Anthology and Romance Magazine, and another accepted for the Robotica anthology.