A Tiger’s Bride By Eve Langlais ~ A Lion’s Pride 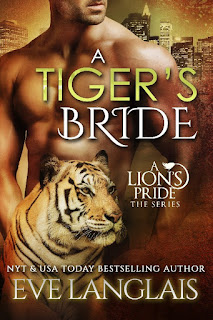 When at first you don’t succeed–turn to abduction.

It’s all in a day’s work when this Russian Siberian tiger meets the woman he wants.

A virgin bride? Damn. There go his plans for seduction and here comes the pressure into making her first time perfect. Because everyone knows that’s the one she’ll remember, forever. Gulp.

Add in a plane crash as well as hunters out to capture them and the heat is truly on.

Can this suave Russian mobster meet the challenge? 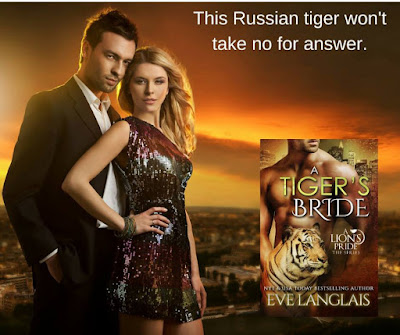 
Awareness came with the speed of cold honey spooling from a dangling spoon. Slowly. So slowly, and that was why it took the third time for her to grasp someone spoke.

“Hunh?” Eyes closed, and the lids too heavy to lift, her mouth a fuzzy peach in need of water, Teena’s mind struggled to wake from the most molasses sleep ever.

“Say I do,” hissed an accented voice, a voice that seemed familiar. But it was the scent that made her smile. Manly musk intermixed with a spicy cologne. It seemed her Russian admirer was still at her side. Had she fallen asleep on him at the party?

It was so hard to remember.

What did she do? Forcing her brain into gear, she strove to recall events. Last she remembered, she was weaving back to the house after her sister’s wedding—drunk as hell because she was so mad at her interfering family—when Dmitri, that sexy Russian, waylaid her. He’d made sure the ground didn’t get fresh with her body parts. Instead, he let them get fresh with his solid frame.

He held her in his arms. Said stuff. Nice stuff. But forget that and fast forward to the exciting part where he kissed her.

Oh my. Upon her he bestowed a masterful kiss that melted her. She remembered the sense of weakness in her limbs. The roam of his hands, then…?

Her brow wrinkled. She couldn’t recollect anything past the amazing kiss.

Had she seriously fallen asleep during the most intense embrace of her life?

Was this why Dmitri held her in his arms, his musky scent surrounding her? “Wake, little kitten. Just for a moment. I need you to say I do.”

“I do?” Do what? Surely he didn’t demand permission to kiss her again? Was he after something else? Blerg. She wished her brain wasn’t such a sluggish mess.

Giving her cobwebbed thoughts a mental shake, she pried her eyes open in time to see Dmitri’s handsome face hovering close to hers. She also heard the words, “I now pronounce you man and wife. You may kiss the bride.”

Before she could grasp what had happened, lips pressed against hers in a molten touch that melted her questions and awakened a fire. The kiss didn’t help her regain her senses. On the contrary, she slipped into a pleasurable state with only one real thought in mind—more.

The arms wrapped around her body held her upright and a good thing, too, seeing as how her legs had the consistency of soft rubber. A tiny part of her remarked she should protest, or at least make an effort to assert some kind of control.

She wasn’t firing on all cylinders. A sluggishness still held her. It occurred to her she should cry and be frightened, and yet…

She truly was enjoying the soft mesh of lips and the warmth of his breath. Or she was until she found herself deposited in a chair. Talk about a rude awakening.

Her body lamented the loss of the warmth from his while her inner lioness meowed in frustration. A frustration she understood all too well, given the ardor he woke refused to settle so easily.

Struggling against the lassitude in her body, she managed to flutter her eyes open, not that it helped her comprehension much. She didn’t recognize her surroundings.

A pen was pushed into her hands. “Sign here,” Dmitri’s accented voice purred in her ear.

“What is it?” she muttered through numb lips as she struggled to remain awake. She peered blearily at the white sheet in front of her, to no avail. The words on the paper wavered.

Without giving it a second thought, she signed.

Then he did too, using the same pen she had, his bold signature alongside hers on the marriage certificate.

Nope, the words on the paper hadn’t change.

She stabbed a finger at the paper, not trusting herself to speak. But if she had, it might have sounded a lot like her father, but with fewer swear words. What the fuck just happened?

He answered her unspoken question. “We are husband and wife, little kitten.”

Oh my. How unexpected.

Married. She was married. To Dmitri. I am married to the tiger.

Hunh, a coerced wedding, a first for the family and certainly never a disaster her sister had ever managed.

No, because Meena evaded Dmitri’s plans.

I, on the other hand, fell like a domino. Worse, I didn’t see it coming. I really thought he liked me. Thought he’d meant it when he said he would woo her and prove his intent.

What a jerk, kidnapping her like this and marrying her on the sly. Making her his wife.

Could a lioness giggle? Her inner feline certainly seemed a tad too pleased.

His mate. The mental rumble vibrated through her body like a ghostly purr, one that left her senses alive.

Are you going to stand up and assert your rights?

“You can’t force me to marry you. Tell him.” She addressed the latter to the man dressed in a suit with a clerical collar of black and white, some kind of religious guy. Surely he wouldn’t condone this farce. “Tell him it doesn’t count because I didn’t agree.”

“You said I do,” Dmitri reminded her.

“Because you told me to while I wasn’t even awake. It doesn’t count. And why is that priest ignoring me?”

“Little kitten, if you calm down, we can—”

“I will not calm down.” She lunged from the chair, only belatedly realizing the flimsiness of it.

The plastic bucket chair with its metal legs, a relic from the seventies, cracked. The hand she’d used to push off slid as the plastic snapped, and she lost her balance. Tipping sideways, she threw out her hand, but her reflexes were still kind of woozy and she missed, hitting the floor with her shoulder then a ricochet of her head. Damned industrial marble floor.

She lay there, at an angle, stunned, and also exposing a lot more leg than she should. Through squinted eyes, she noted her skirt riding high on her hip.

Dmitri noticed too. Interest smoldered in his gaze, a gaze stolen by the collared man, who cleared his throat.

How dare he steal Dmitri’s attention?

“Now, now, little kitten, give me a moment to deal with this obviously brave man, daring your vicious rage.”

“I am not vicious.” Vicious was her sister.


“I think you’re tougher than you know.” 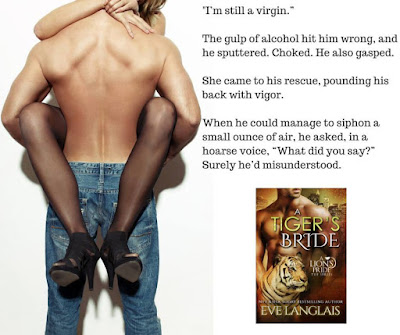 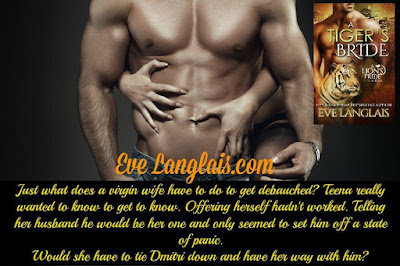 Hello, my name is Eve and I am a Canadian author who loves to write hot romance, usually with hot shifters, cyborgs or aliens. I should warn you that I possess a twisted imagination and a sarcastic sense of humor something I like to let loose in my writing.

I love to write, and while I don't always know what my mind is going to come up with next, I can promise it will be fun, probably humorous and most of all romantic, because I love a happily ever after.

Thanks so much for coming by and checking me out. If you'd like to know more, read some excerpts or find out what's coming next, then please visit me at http://www.EveLanglais.com