Last Chance Cowboys: The Drifter ~ By Anna Schmidt ~ Where the Trail Ends ~GIVEAWAY 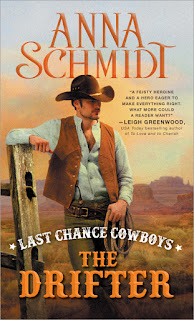 Last Chance Cowboys: The Drifter
Series: Where the Trail Ends, #1
By Anna Schmidt

~*~*~*~*~*~
Blurb:
Caught between a greedy corporation and a desperate love of the land, Maria Porterfield barely has time to mourn her father’s death. If her family is to survive, it’ll be up to her to take charge—but she can’t do it alone. When a mysterious drifter rides into town, the handsome cowboy seems like an answer to her prayers. But Chet isn’t interested in settling down, no matter how tempting the offer…

Chet made his way West looking for a fresh start—the last thing he wants is to get involved in someone else’s fight. But something about Maria awakens a powerful need to protect the fierce beauty at all costs. He never thought he’d find love, but as danger presses in, he may find there’s more beyond the next horizon than just another long and dusty trail.

Award-winning author Anna Schmidt delights in creating stories where her characters must wrestle with the challenges of their times. Critics have consistently praised Schmidt for her ability to seamlessly integrate actual events with her fictional characters to produce strong tales of hope and love in the face of seemingly insurmountable obstacles. She resides in Wisconsin.

~*~*~*~*~*~
This September the first in Anna Schmidt’s Where the Trail Ends series, Last Chance Cowboys: The Drifter, is being released! To celebrate, Anna’s here to play a quick game of “Would You Rather?” with us!

Would you rather email an embarrassing email to your entire company or eat an entire stick of butter?

“Butter. [GAG!] But I can get rid of the butter with one good finger down the throat. The aftermath of an e-mail would haunt me for a VERY long time.”

The rain started just after midnight. Maria was awakened by the plop of large raindrops on the canvas of the tent. She lay very still, willing each plop to bring more and more until there was a true downpour. When it happened, she grinned, then laughed out loud and shook Trey. “Wake up,” she said. “It’s finally raining.”
From outside the tent, she heard first grumbles and then shouts of pure joy as the men came awake and realized that they and their belongings were soaked. Trey sat up and rubbed his eyes with his knuckles. Then, as he became aware of the sounds of the rain and the men’s shouts, he grinned. “Can I go?” he asked.
“We both will,” Maria said, tossing him his boots before pulling on hers. She lifted the flap and followed Trey outside. In seconds, they were both drenched, and she had to laugh when she saw Happy and Bunker and Slim dancing around what had been the campfire. Even Roger was smiling, and when he saw her, he came to her at once and bowed. “May I have this dance, Miss Maria?”
Deciding it was time to put aside her irritation with Roger and his jealousy, she took hold of his hand as they joined the cowboys circling the fire pit. She looked for Chet and saw him standing off to the side, his face turned up to the sky and the balm of the falling rain.
“Come on, Trey,” she called and broke the circle to grasp her brother’s hand. Trey pulled Chet into the circle as well.
“And promenade,” Bunker shouted and began weaving his way along the circle, nodding to each man he passed until he reached Maria. “And swing your partner,” he bellowed as he practically lifted Maria off her feet and swung her around. She basked in the swirl of faces spinning past and laughed. “Put me down, Seymour,” she ordered, but she wasn’t serious. The truth was that she could have stayed that way all night—her face pelted with rain, the air already beginning to cool, and the promise of new growth on the range something she could practically taste.
Bunker set her on her feet and instructed the others to bow to their partners as he was bowing to her, his grizzly beard sopping wet. As she promenaded with Bunker down the line, she felt a lightness and joy that she had not known in months. The rain and the cadence the men kept to substitute for music made her feel as if just maybe everything would be all right after all. These men were like family, and together they would find their way.
“Change partners,” Bunker shouted and spun her away and straight into the arms of Chet Hunter.
All at once, the world went still.
He held her as if she were something fragile and precious, and yet she could feel the warmth of his hand spanning her waist and see the silhouette of his rock-solid muscles beneath the soaked fabric of his shirt. He locked his gaze on her face—and as he guided her through the dance, she found that she could not look away. No, it was more like she did not want to look away.
Then a flash of lightning lit the night sky, spooking the horses, and as suddenly as the celebration had begun, it was over. The men ran to calm the horses, leaving her standing next to the dead campfire. But before he left her, Chet leaned in close and said, “Best find cover, Miss Maria. Looks like this might be some storm.” He hooked an errant curl behind her ear. “Go,” he said, and his voice was husky—intimate.
She did not move, not even when he glanced back at her. She thought she saw the hint of a smile cross his lips, but then he was lost in the blackness of the night. As she hurried back to the tent she shared with Trey, she tried to remind herself that the moment they had just shared was nothing more than a mutual celebration. Would he be any different when he saw her? Of course not. Chet Hunter was a good and kind man—who worked for her, who had made it clear that in time he would be moving on.
She was the one who was going to feel awkward when she saw him next. She was the one acting like a love struck girl experiencing her first real crush. She was the one who could not seem to think about anything except how his arm had felt when he danced with her and how those lips had quirked into that half smile…and how very much she wondered what it might be like to kiss the handsome drifter.

Email ThisBlogThis!Share to TwitterShare to FacebookShare to Pinterest
Labels: Anna Schmidt, Excerpt, giveaway, Sourcebooks, Sourcebooks Casablanca, Where the Trail Ends, Would you rather