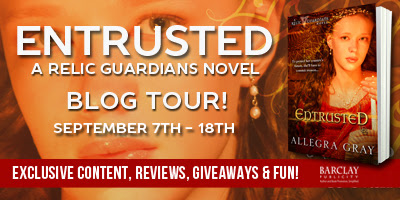 To protect her country’s future, she’ll have to commit treason…
ENTRUSTED by Allegra Gray is a stunning historical Young Adult masterpiece of suspense, hope, and determination. This story follows orphaned Audrey as she’s tasked with keeping ancient relics safe from tyrannical hands and their unholy deeds. With the help of a charming adventurer, Tobias, Aubrey must do all she can to protect the relics she’s been entrusted to guard…even if it costs her life.

Join the Entrusted Blog Tour September 7th to 18th! One grand prize winner will receive a $25 Amazon Gift Card! Please use the RaffleCopter below to enter. Remember you may increase your chances of winning by visiting the other tour stops. You may find those locations below.

Orphan Audrey Thorndale longs for the peaceful life of a convent, but with a younger brother to care for and England's religious houses falling one by one to Henry VIII's Reformation, she'll have to find another way to serve God and country. The Abbot of Glastonbury, aware of Audrey's dilemma and loathe to see the great treasures of his abbey looted and destroyed, suggests a plan that could save Audrey, the relics, and even the future of Britain...but if she agrees to it, she'll have to commit treason.

Second son and sometime adventurer, Tobias Seybourne has never left an opportunity unexplored. He’s won the favor of the king, and is aiming for knighthood, when Abbot Whiting offers him the chance of a lifetime—partner with Audrey, and protect England’s greatest legend. Most importantly? Do it without ever giving the king a reason to suspect more devious purposes simmer beneath Tobias’s charming façade.

With help from the abbot, Audrey and Tobias set in motion a plan to ensure that when the abbey walls crumble, one particular treasure will be safely hidden elsewhere.

But as the abbot points out, the king’s minions keep close account of their plunder, and the contents of Glastonbury’s repository are well documented.

With the king’s men bearing down fast, someone must take the fall…

“You are worried that Glastonbury is in peril, and the treasures it holds will end up in the king’s coffers.”

“Yes—and no.” He eyes me. “It’s more complicated than that. You must not repeat anything you are hearing right now.”

“No, Father Abbot. Never.” If there is one thing I am, it is loyal.

“When I combine what I know—what I, myself have seen and heard—with what the monks who have already lost their homes tell me, I see a future in which certain relics of Glastonbury never make it to the king’s coffers, but are destroyed instead.” He shakes his head sadly. “The idea that the holy relics would go into the king’s hands was disturbing enough, but to destroy them? Sacrilege.

“Again, I must emphasize the importance of not repeating this conversation—to anyone. Not even Sam. The Treason Act is too loosely interpreted these days to take chances.”

I gulp, cursing myself for giving in to curiosity. Now it is my hands that tremble. I should tell him to stop, that I don’t want to hear any more, but my tongue is stuck to the roof of my mouth. I should never have asked what was troubling him. And yet, I have the sense we have set on an irrevocable course, and I must see it through.

Finally, I pry my tongue loose. “I appreciate your honesty, Father Abbot.”

“Should Glastonbury fall, the treasures that can be measured in gold and silver will most certainly find a new home—whether it be the royal treasury or a pilferer’s stash. It is the others that trouble me.”

He rubs his temples, as though even thinking hurts. I begin moving about the room again, straightening things, dusting surfaces…the little, normal, everyday movements that I know, somehow, provide the backdrop of comfort that Abbot Whiting needs right now.

“You remember those visitors from Walsingham? They informed me that the shrine there, the shrine to the Virgin, which the king himself has visited, has been destroyed. The statue of the Virgin removed, the shrine itself despoiled, and the buildings looted. The same happened at Roche Abbey this summer.”

Finally, it sinks in, and I know exactly which of Glastonbury’s relics—one with no value in gold, but still of immeasurable worth—is troubling him so.

I stop dusting. My tongue, now loosened, does not have the sense to stop.

“If Glastonbury falls, what will become of King Arthur?”

Allegra Gray grew up with her nose in a book and her head in the clouds—that is, when she wasn’t focused on more practical things like, say, learning calculus. Perhaps all those stories inspired a spirit of adventure, because at the age of seventeen she embarked on a career journey that has (so far) included serving as an officer in the U.S. Air Force, grad school at Virginia Tech, teaching English, and managing defense contracts in the Middle East. The best thing about this breadth of experience? When she tried her hand at writing novels like the ones she’d always loved, she recognized at once that she’d found a true passion. Her forthcoming series, The Relic Guardians, is genre-bending mainstream/historical suspense, inspired by her long-held desire to unveil things obscured by the mists of time. Allegra is also the author of four historical romances, including the “Daring Damsels” trilogy of Nothing But Scandal, Nothing But Deception, and Nothing But Trouble. 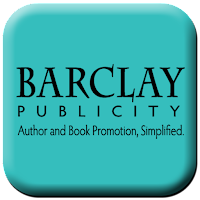