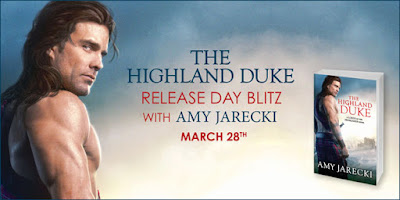 THE HIGHLAND DUKE
Series: Lords of the Highlands, #1
By Amy Jarecki

The Highland Duke is first chance I have had to read Amy Jarecki's work. My first thought is WOW! This lady has put together a story that had my heart pounding, my fingers flipping pages, and my mind completely engrossed in the story line. This is one of those incredibly action packed, suspense filled, edge of your seat reads. I devoured this book in one setting because I just had to know what happened.

Akira Ayres is a smart, brave, creative, kind young lady that I couldn't help but admire right away. She didn't think twice about what to do when she found a wounded man after a horrific battle. She started doing everything she could to save him even though she had no clue who he was.

Geordie, the Duke of Gordon is fighting for what he thinks is right. However he also doesn't want to risk his land holdings or endanger the safety of his people. So when he enters into a battle with his cousin he tries to remain unknown. That would have went just fine if he would not have been injured in the battle. Geordie really is one of the good guys. He is kind, caring, and tries really hard to do the right thing.

Geordie doesn't want to involve Akira in his adventure but he needs help. So they start out on their trip through the highlands to get Geordie back to his home. During their travels they encounter so many things. The redcoats are hot on their trail to capture the Duke of Gordon. There are many many dangerous moments that had me holding my breath wondering how these two were going to get out of each dangerous situation.

Akira and Geordie work well together. They have a connection and a very strong attraction. The long they are together the stronger the passion and feelings grown. I enjoyed watching these two very strong independent people weave their way through new feelings, dangerous situations, friendships, and family issues. There are so many things that stand in the way of these two being together and finding their happily ever after. One of the biggest problem is their standings in society.

I really really enjoyed The Highland Duke and I can not wait to read the next book in this series. If you enjoy a suspenseful, romantic story with a few hot and steamy scenes along the way you need to grab this book now. I think you will enjoy it. 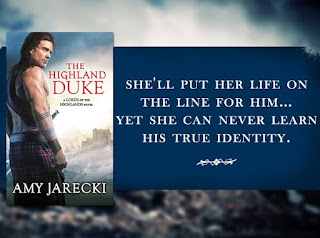 When Akira Ayres finds the brawny Scot with a musket ball in his thigh, the healer has no qualms about doing whatever it takes to save his life. Even if it means fleeing with him across the Highlands to tend to his wounds while English redcoats are closing in. Though Akira is as fierce and brave as any of her clansmen, even she's intimidated by the fearsome, brutally handsome Highlander who refuses to reveal his name.

Yet she can never learn his true identity.

Geordie knows if Akira ever discovers he's the Duke of Gordon, both her life and his will be forfeit in a heartbeat. The only way to keep the lass safe is to ensure she's by his side day and night. But the longer he's with her, the harder it becomes to think of letting her go. Despite all their differences, despite the danger-he will face death itself to make her his . . . 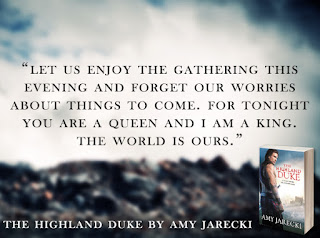 Curled under Geordie’s arm, Akira finally stopped shivering. All around them rain splashed. Everything was soaked and their little alcove smelled of horse—not a horrid smell, but not one she’d choose for her boudoir, either. If she had a boudoir.
She chose to ignore the voice in the back of her head telling her it wasn’t proper to allow a strange man to put his arm around her shoulders and offer her warmth. But there was something in the way Geordie looked at her that made her feel all warm inside and, moreover, protected. Aye, he’d been in a great deal of pain—was still in great pain—but since he roused from his last bout of unconsciousness, he’d behaved admirably. He’d brought the horse under control, figured out where they were, and formed a plan to take them to someone he could trust to provide her with an escort home.
With darkness, the air grew colder. Clutching her fists under her chin, Akira curled into Geordie’s heat. He smoothed his palm along her outer arm, his touch soothing.
When he turned his lips toward her, his warm breath skimmed across her forehead. “Try to sleep.” The gentle burr of his voice imparted all the more comfort.
But she couldn’t get too comfortable; she must to do her duty. He was still her patient. “I’m the healer. I should be telling you to do the same.”
His hazel gaze drifted to her mouth, and he grinned.
“Very well.” He pulled his arm away, but not before running his fingers across her back. Blessed tingles spread over her skin as if she’d been caressed by feathers. Oh, heaven help her, his touch was unbelievably sublime. If only she could ask him to run his fingers back and forth again—just one more time.
She reached for the hem of his kilt, then quickly snapped her fingers away. What had she been thinking? True, she’d applied the salve before, but that was when he was mostly unconscious and definitely before he’d put his arm around her shoulder and smiled at her like a…like a…brawny Highlander.
“Have you gone shy, lass?” he asked with a hint of humor in his deep brogue. 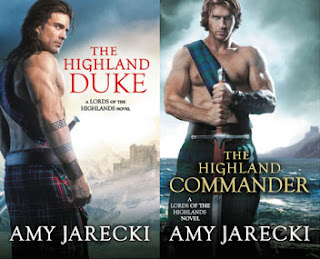 Amy Jarecki is a descendant of an ancient Lowland clan and adores Scotland. Though she now resides in southwest Utah, she received her MBA from Heriot-Watt University in Edinburgh. Winning multiple writing awards, she found her niche in the genre of Scottish historical romance. Amy writes steamy edge-of-your-seat action adventures with rugged men and fascinating women who weave their paths through the brutal eras of centuries past.