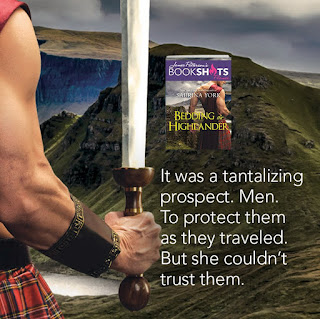 BEDDING THE HIGHLANDER
By Sabrina York

Only a Scot can steal her heart.
There's nothing ladylike about Katherine Killin. She's a spitfire who cannot be tamed. To rid himself of her, and to honor a truce set by the Duke of Glencoe, her father agrees to wed her to his clan's mortal enemy, Ben Rannoch. But when Katherine meets the enticingly masculine Kurt Rannoch, brother of her betrothed, she suddenly craves domination. 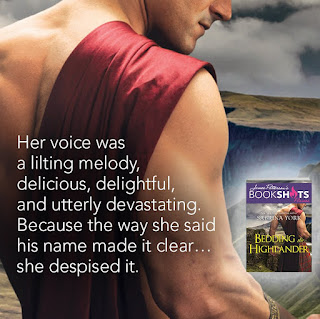 It was a glorious ride. Kate wanted to throw out her arms, turn her face to the downpour, and revel in the moment. Racing across the lea with Kirk, warm and strong behind her, was magnificent.
She’d always loved storms and the savage beauty of nature. It made her feel one with the world. Alive. But there had never been a more exhilarating tempest than this.
She could taste the acrid scent of lightning on her tongue, feel the crackle of its energy in her hair. Danger stalked them, and it excited her.
But something else did too.
An enormous, muscled man, held her tightly, breathing against her neck in harsh pants. The movement of their bodies against each other created a friction as they rode in manic union. The damp heat of the plaid conjoined them and an earthy scent rose between them.
Ah, it was splendid.
It was nearly a disappointment when it ended, when he slowed and guided the horse to an outcropping protruding from the rocky tor.
And then, he slid from the horse, leaving her alone and suddenly cold. When she frowned at him as he reached up for her, he stilled. “Are you all right, lassie?”
“Aye,” she said, setting her hands on his broad shoulders and allowing him to ease her down. Lord, he was large. So hard and strong. So…tantalizing with his fierce expression. She didn’t bother to hide her shudder.
“You’re freezing,” he said in a low, feral growl.
She was not. She was on fire.
The thrill of the manic ride, the exhilaration of their near disaster, and the pure elation of life and living pulsed in her veins. Which was why she stepped toward him, rather than stepping away. Why she reached up and cupped his nape. Why she tugged him down and whispered, “You saved me.”
And she kissed him.
Surely she intended it only to be a kiss of gratitude, one of pure and simple thanks. It was meant to be quick and passionless and chaste.
Perhaps she had been deluding herself, because she fiercely wanted, to the depth of her being, to taste him.
Glory. It was a mind-numbing kiss. It began as a brush of her lips against his. But then, transfixed by the flavor of his breath, the velvet caress of his mouth, she lingered. Her fingers tangled in his hair, tightened. She eased closer and sealed them together from chest to groin.
Though he allowed this familiarity, she could tell he was resisting the urge to kiss her back. His muscles bunched, he arched away.
The thought annoyed her so she tipped her head and deepened the kiss, pressing her tongue between his lips.
He made a sound, something like a growl, and he broke the kiss completely.
In a rush, he whipped her into his embrace and backed her against the wall. She loved his power, the heat of his muscles, his raging passion. But even more, she loved that he did not give rein to his savagery.
Even now, as he consumed her in a series of hungry kisses, he held back. Refrained from crushing her against the granite tor.
With a growl, he reared back and stared at her. “Lass, you tempt me,” he said in a gravely tone.
She tried to hold back her smile, and failed.
“We canna do this.”
Ah, her mood plummeted. And the least of her despair was her plot to scuttle the wedding to his brother. Her body hummed with a desire she’d never experienced before. It was a soul-deep yearning. A need.
To her surprise, he chuckled, and that irked her. “What is so funny?” she snapped. Did he not know how she ached?
“Lass, lass.” He stroked her hair and cupped her cheek in an attempt to soothe her. She scowled at him. He would have to do better than that. Yet what did he do? He chuckled again and pulled her into his arms, though she remained stiff. “I have work to do before we play,” he murmured. He said this in a teasing tone, one that indicated there would indeed be more kissing.
More of…everything. 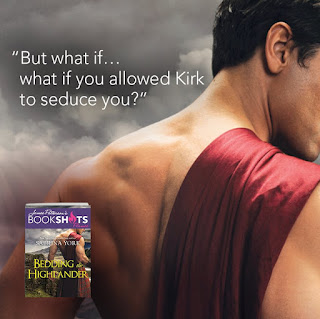 Her Royal Hotness, Sabrina York, is the New York Times and USA Today Bestselling author of hot, humorous romances. Her titles range from sweet & snarky to scorching romance in historical, contemporary and fantasy sub-genres. Represented by Nicole Rescinti at the Seymour Agency  Visit her webpage at www.sabrinayork.com to check out her books, excerpts and contests.
Giveaways: http://sabrinayork.com/current-giveaways/
Newsletter: http://sabrinayork.com/gift/ 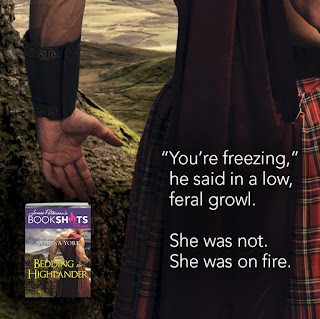