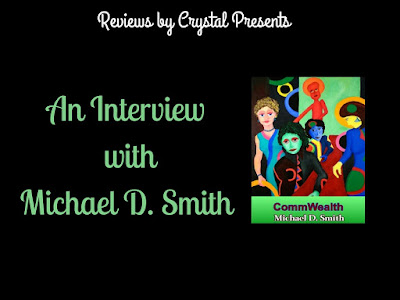 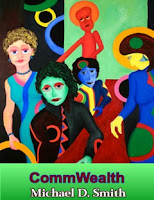 The CommWealth system, introduced just six months previously, has created a society in which there is no legal claim to any kind of private property. Any object from your house to the clothes you’re wearing can be demanded by anyone, to be enjoyed for thirty days before anyone else can request it. As actors in the Forensic Squad theatrical troupe adapt to this giddy chaos, CommWealth probes their breaking of the Four Rules sustaining the system, and several members navigate betrayals, double agents, and murder to find themselves leading a suicidal revolution.
CommWealth is available at:

Michael D. Smith was raised in the Northeast and the Chicago area, before moving to Texas to attend Rice University, where he began developing as a writer and visual artist.  In addition to exhibiting and selling paintings and drawings, he’s completed fifteen novels.

Smith’s writing in both mainstream and science fiction genres uses humor to investigate psychological themes.  On his blog, he explores art and writing processes, and his web site contains further examples of his writing and art. He is currently Technology Librarian for McKinney Public Library in McKinney, Texas.

CommWealth is his first novel published by Class Act Books.

Find out more about Michael at:

Website: www.sortmind.com,
Blog: http://blog.sortmind.com/wordpress/
Posted by Reviews By Crystal at 1:30 AM