#Interview - Dragon: The Tower of Tamerlane By James Austin McCormick 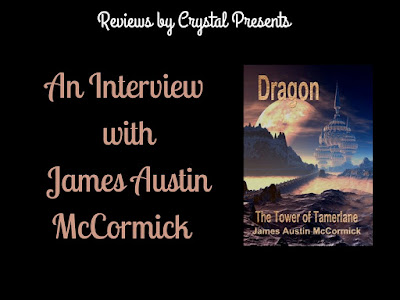 Dragon:
The Tower of Tamerlane
By James Austin McCormick

Crystal: Today I have the pleasure of hosting James Austin McCormick. Welcome James. I'm so happy to have you here today. Would you share a little bit about yourself with us today?

James:  Well, I’m forty-eight now and have been an avid reader and compulsive writer for most of that time. I love all types of speculative fiction and as I get older like to mix the various genres together more and more in my own writing. I’m not prolific by any means and prefer writing short stories and novellas to full-length novels, but I always have a story on the go and an idea I’m trying to work out. I like the escapist nature of fiction writing above all else. As for the more basic stuff, I’m a college lecturer from Manchester, England, married with two young daughters.

James: If you mean from my own work then one of my favourite scenes is from my horror novel, Balec, where the main character, a PI called Adam Chance, tries to make his way through a necropolis full of undead guardians, intent on stopping him. They break from the ground like classical furies, pursuing and trapping him in a mausoleum where even more horrors await. In the near future, I want to write something similar again.

James: The latest release is called The Prisoner of Valathia and is out this June. It is the last tale in my science fiction Dragon series. The first book, simply titled Dragon, is composed of chapter stories and takes place over a twenty-year period and focuses on two unlikely heroes, a neurotic, cowardly elf called Sillow and a surly, ill-tempered barbarian by the name of Brok. They are the odd couple in space, ill matched and constantly squabbling as they find themselves caught up in intergalactic, potentially apocalyptic events. Because the novel spans such a long time I have been tempted several times to go back and fill in some of the missing gaps between the chapters. This last tale focuses solely on Sillow. Although it is “soft” science fiction, often light-hearted with lots of action, I wanted to explore the protagonist’s character this time as he is an orphan driven by insecurity and something approaching an inner loathing. I wanted the inner landscape to be as important as the outer one. I think (I hope) I got it just about right.

James: I mainly write pulp-flavoured science fiction and horror but also occasionally some fantasy as well. At present, I’m adapting a short sword and sorcery tale called “The Clockwork Man” into a much longer work. It’s something I’ve been planning to do for quite some time. The short story was very much like an Arabian Nights type tale but the reworked version seems to be drifting away from that a little.

James: None at all, and when I’ve tried in the past it’s never worked. I tend to write for short periods throughout the day. Fifteen minutes here, ten minutes there. I find in the meantime my subconscious has been working on the plot for me. Of course, sometimes I can spend hours, and when I’m revising then almost whole days. It all depends.

Crystal: Did you have to do a lot of research for this book or any other? If so, do you have a fascinating fact that you have learned you would like to share with us?

James: I really wish I could say I do but the truth is for the last few years, most of my science fiction has been of the “soft” variety, and the settings and ideas are from my imagination.

James: My reading is quite eclectic and I always have one classic on the go at any time. I’ve just finished Ben Hur and am now about to read Jamaica Inn. In terms of my favourite authors in the genres I write in, I’d have to say Clive Barker, Stephen King and Dean Koontz in horror, and in science fiction, Larry Niven, Bob Shaw, Arthur C. Clarke and Isaac Asimov. My two favourite writers of all time though, who I’ve read and re-read countless times, are Robert E. Howard and H. P. Lovecraft.

James: Definitely, YA Fantasy. I’ve been trying to write one for a few years now. It’s about a young prince who is lost in a magical forest after escaping from a murderous uncle intent on seizing the crown. To save his life the faerie take him into their own realm and raise him as one of their own, imbuing him with powers. Yet when he comes of age the prince wishes to return to the human world and restore the wrongs his uncle (now the king) has brought about. Adopting the identity of a travelling minstrel he travels from place to place, doing just that, until of course the final confrontation. I’ve tried a couple of times to write this but the story won’t let itself be set down, I don’t seem to be able to get the “feel” quite right. When I do attempt to write it, it suddenly grows darker and more complex than I intended.

A reluctant solo agent, Sillow is called upon to undertake his first mission, investigate the Tower, a high-tech prison complex along with the oligarch who runs it, a mysterious nobleman who calls himself Tamerlane.

All the while, something has been evolving, growing stronger inside the Tower, something intangible yet far more dangerous than Tamerlane ever could be, a being implacably opposed to all life in the galaxy…

…and only Sillow has any chance of stopping it.

EXCERPT from Dragon: The Tower of Tamerlane:

Laser fire and shouts echoed as Sillow was thrown headlong into the cell.
“What are you?” a female voice asked. “Some type of green midget?”
Sillow groaned and tried to get up. He settled for a slumped kneeling position.
“I’m a Sylvan,” he replied. He squinted into the shadows and saw a figure seated on the upper berth of a bunk. He could make out little apart from a muscular, yet shapely pair
of legs. “Who are you?”
The figure jumped down from the bunk. She was an Amazonian, strong and athletic with an impressive cleavage and long chestnut hair falling around her shoulders. She was
also extremely pretty despite the artificial eye and cheek implant. She stretched out a perfectly formed silver arm, extending her hand. “Titanya.”
Sillow’s eyes widened. “The Pirate Queen?”
The woman nodded.
The Sylvan took her cybernetic hand and let himself be hauled to his feet. He found himself head high to her magnificent chest.
“Sillow,” he replied, smiling at her breasts. “I’m from the Alliance.”
“Up here, short stuff,” the woman told him.
Slowly and very reluctantly, Sillow turned his attention upwards. He grinned. “Nice to meet you.”
Outside, cries and weapon fire continued to echo through the halls.
Titanya frowned. “Any idea what all that’s about?”
“Whole place is going crazy,” the Sylvan replied. “Something got into Tamerlane’s AI system.”
The woman took a couple of tentative steps toward the door. Screams echoed through the walls.
“Sounds like a warzone out there,” she remarked. “You sure the AI is causing all this?”
Sillow frowned. “You know, this is going to sound kind of crazy but…” he paused, running a hand over his pointed chin.
“What?” Titanya demanded.
“Well, it kind of looks like the one causing all this is Darius Drake. You heard of the guy?”
“Oh yeah,” the Earth woman answered. “We’ve met.”
“Well, somehow he’s put himself into the computer system.” Sillow gave an embarrassed shrug. “Sounds sort of off the wall I know.”
There was a sudden explosion and flames tore through the slits at the top of the door.
“Look out.” Sillow threw himself at Titanya, knocking her off balance and sending her tumbling to the floor. The Sylvan landed on top of her, head buried in her thick auburn
locks. A fireball tore past them, turning the bunks into cinder.
It was some moments before Sillow glanced up. He found himself looking at the stern, beautiful features of the Terran woman.
“You okay?” he asked. “Just so you know, that was me protecting you.”
“Just so you know,” Titanya replied, “under any other circumstances I’d have busted your jaw for that.”
Sillow grinned. “You mean saving your life?”


Titanya flung the little Sylvan back onto his feet. “Yeah, right. I can’t believe a pipsqueak like you got the drop on me.” 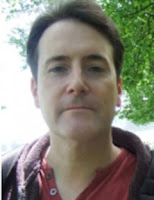 James Austin McCormick is a college lecturer from Manchester, England and in my free time enjoy writing speculative fiction, mostly science fiction, horror and a little sword and sorcery fantasy. He is also a particular fan of classic Gothic and Victorian horror tales and is currently in the process of writing updated versions of these with a science fiction spin.

James’ novels include the trilogy Dragon (Dragon, Dragon: Smuggler Tales, Dragon: The Tower of Tamerlane), The Last Synn, a sword-and-sorcery story, a SciFi novel, Sunfall, and a horror novel, Balec. All are available from Class Act Books.

LEARN MORE ABOUT JAMES AT:

Email ThisBlogThis!Share to TwitterShare to FacebookShare to Pinterest
Labels: @jimbomcc69