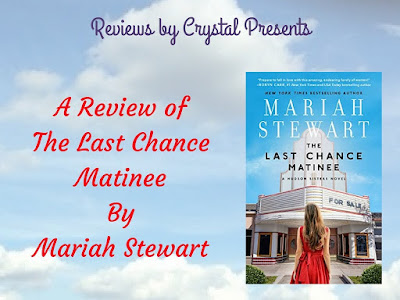 This is one of those stories that really makes you think what little things could be hiding in your family tree. Is there a chance you have a someone out there that you don't know about and that knows nothing about you? Wow, just that thought is amazing.

I was hooked on this story from the beginning. Mariah Stewart has another fabulous series on her hands. The characters are great and for the most part quite charming. I will say there is one that hasn't quite found her way into my good graces yet.

I quickly bonded with Cara and I admired her attitude. With all that she has been through she has still tried to stay quite positive and light. She's fun, independent, caring,  intelligent, a good sister (without a whole lot of practice yet) and a loving aunt to a niece that she is just getting a chance to know.

Des has a heart of gold when it comes to pets. I so admired this lady's determination when it comes to animals and her super powers to get those frightened little ones to come to her. She too is independent, caring, smart, and charming.

Allie is the third sister. I will say she does her best to be a good mother. Her adorable, sweet, and incredibly intelligent daughter has been living with her father. Allie is missing Nikki like crazy. The thing about Allie is she has a bit of different attitude. I didn't form that quick connections with her. She's tad bit selfish and she has a problem she isn't willing to admit to yet. I think she is redeemable though.

Then there is Barney. How could I not instantly bond with this incredible lady that is fun, smart, loving, and can't wait to learn more about her nieces and share their family history with them.

I love the idea that these three sisters have to work together to restore the old theater that is part of the family legacy. The sisters need help coordinating all that work on the theater and that's where Joe enters the picture. Joe is one of those wonderful good guys that I couldn't help but fall for right away. He honest, hard working, knows his trade quite well, and knows the contractors to hire to get the jobs done.

Joe and Cara don't hit it off right away. Their first impressions of each other are well not good. The instant attraction hits though and when they start to get to know each other those impressions change and passion starts to build. I really enjoyed watching these two forming a relationship.

This book is full of relationship building. So many people that are connected but yet don't know each other all that well. It's such a wonderful story and there is so much emotion, a touch of mystery, lots of secrets that are slowly uncovered, romances that just might be heating up, and family that is bonding along the way.

All in all I LOVED this book. If you enjoy Mariah Stewart's work then I think you will love this one as much as I did. I will say I think this falls more into the women's lit category with romance as an added bonus.

I can not wait to for the next book in the Hudson Sisters series! I will be anxiously awaiting the release to see what these three sisters and their charming aunt are up to next. I'm sure it will an interesting read.

From the New York Times bestselling author Mariah Stewart comes the first novel in her all-new series, which follows a trio of reluctant sisters who set out to fulfill their father’s dying wish and, in the process, discover the truth not only about their pasts but about each other—and themselves—in a way that will forever alter their futures.

When celebrated and respected Fritz Hudson passes away suddenly, he leaves a trail of Hollywood glory in his wake—and two separate families who never knew the other existed. Allie and Des Hudson are products of Fritz’s first marriage to Honora, a beautiful but troubled starlet whose life ended tragically. As his relationship with Honora was unraveling, Fritz was simultaneously falling in love on the Delaware Bay with New Age hippie Susa—but while Fritz adored Susa and fathered daughter Cara with her, he never quite managed to come clean about his West Coast Family.

Now Fritz is gone, and the three sisters are brought together under strange circumstances: there’s a large inheritance to be had, specifically one that could save Allie from her ever-deepening debt following a disastrous divorce; allow Des to open a rescue shelter for abused and wounded animals; and give Cara a fresh start after her husband left her for her best friend; but only if the sisters upend their lives and work together to restore an old theater that was Fritz’s obsession growing up in his small hometown in Pennsylvania’s Pocono Mountains. Will the sisters come together to turn their father’s dream into a reality – and will they come away with far more than they bargained for?

From the Preface, The Last Chance Matinee:

Everyone is familiar with the adage “write what you know”; it’s a saying that has dictated much of my decades-long career in publishing. But this time, it was what I (or rather, my mother) didn’t know that formed the basis for this first book in my new Hudson Sisters series.

When my mother was in her mid-forties, she received a letter from a woman named Alice, the wife of her recently deceased cousin Bill. Alice thanked my mother for the sympathy card she’d sent her, and finished her note by saying, “You do know that Bill was your half brother, right?”

…Of course, I was fascinated. My grandfather died when I was four or five years old, and I have very little memory of him other than his deep, hearty laugh. I’ve been thinking for years that this foundation of a love child and secret siblings would make a great story; but not knowing all the facts, I was free to fill in the blanks—and so I did. Years passed before I felt I had the right story in my head. This is that story. I hope you enjoy my version of what could happen under such circumstances.

Mariah Stewart is an award-winning New York Times and USA Today bestselling author of numerous novels as well as several novellas and short stories. She lives with her husband and two rambunctious rescue dogs amid the rolling hills of Chester County, Pennsylvania, where she savors county life and tends her gardens while she works on her next novel. Visit her at mariahstewart.com and follow her on Facebook.com/AuthorMariahStewart and on Instagram @mariah_stewart_books.

~*~*~*~*~
Monday Matinee Giveaway:
Follow XOXO After Dark on Twitter (@xoxoafterdark) Mondays in April to see which blogs on the blog tour will host a giveaway for The Last Chance Matinee: April 3, 10, 17, 24! #MondayMatinee

Email ThisBlogThis!Share to TwitterShare to FacebookShare to Pinterest
Labels: @meligrams