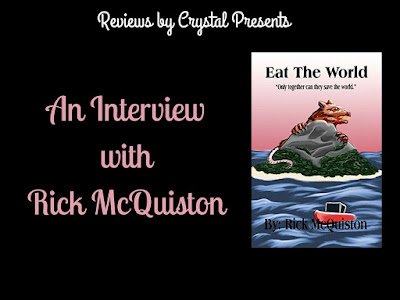 Crystal: Today I have pleasure of hosting Rick McQuiston. Welcome Rick! I excited to have you here today. Would you share a little bit about yourself with us today?

Rick: I guess you could say that I'm an average guy who happens to love anything related to horror. Fiction, movies, artwork, anything in or related to the horror genre. I'm also interested in music, and when not writing, I find a creative outlet in playing drums, guitar, and keyboards.

Rick: My sixth novel (a zombie horror/thriller based in Metropolitan Detroit), and a spider-themed anthology.

Rick: Eat the World was spawned from my love of Mackinac. There are so many interesting landmarks and history attached to the island and mainland that I found it relatively easy to create characters to populate it. From there the pen took over.

Rick: I love to sip a hot cup of green tea while I write. It helps me focus.

Rick: I love the scene where the young couple on bicycles are confronted by the rats. I made the woman pregnant to make her a more sympathetic character, as well as making her more vulnerable. That scene still gives me the creeps. I’m very proud of it.

Rick: I write best with no background noise. Silence is golden.

Rick: Just to keep writing. When you have trouble coming up with ideas, look around you. Sometimes even the mundane can produce something interesting.

In picturesque Mackinac a growing army of rats are beginning to seep into the community of tourists. They seemingly appear out of nowhere, and it is up to ordinary people to gather their courage and battle the hordes.

The rodent scurried through the narrow channel. It barely managed to squeeze its lengthy bulk into the tight aperture, but by inhaling a deep breath of warm, salty air, it was able to reduce its girth enough to allow it somewhat comfortable passage. A cursory glance to either side after it cleared the opening revealed nothing predatory or dangerous.
The rodent then scrambled into the brush.
In its wake was a vicious, gray-green substance that loosely resembled hydraulic motor oil left in the sun too long. It was thick in consistency, yet still transparent enough to allow the dozens of tiny organisms swirling within it to be seen. It bristled with unnatural life.
The small grass snake slithered through the brush. Its brown, speckled hide gave it perfect camouflage in the wild. It melted into its surroundings, becoming for all intents and purposes, invisible to both predator and prey. It was its natural defense mechanism as well as aiding it with tracking down prey.
The snake's belly convulsed with hunger. It hadn't eaten in days and was in danger of starving. It scanned the woods for any sign of movement, anything at all that it could inflict a bite on and swallow whole.
There was no movement whatsoever. Not even a stray beetle or ant scuttled by. The snake was completely alone in the vast wilderness of the island. It laid perfectly still, both to conserve energy and to avoid detection. It sensed that something was watching it from a darkened crevice nearby. Something bigger than it was and undoubtedly just as hungry.
The snake didn't move a muscle. It hoped that whatever was hidden in the crevice wouldn't notice it. The strange substance on the ground bristled beneath its body, but it had more pressing matters to be concerned about. Flicking its tongue, the snake tasted the air. Far below, the cold waters of Lake Huron washed up against I-67. Being the only state highway in the US without motorized vehicles, the pristine ribbon of asphalt circled the entire island.
The movement caught the snake's attention. It swung its conical head in the direction of the sound: the dark crevice. Whatever was watching it had moved. Several quick tongue darts picked up a scent, causing the snake to recoil back into itself. It could defend itself if need be, but if its adversary was larger it would quickly opt for retreat. Self-preservation was perhaps the only instinct that overrode all others, including hunger and the need to mate. When faced with a threat, survival was paramount.
The snake hissed in a feeble effort to ward off its potential adversary. It reared up then to display its size. It did not know if it was larger, or smaller than the other creature, but it was one of the few weapons it possessed.
The rodent poked its pink snout out of the crevice. It sniffed a few times, and satisfied that suitable prey was within striking distance, settled back on its haunches as it prepared to attack.
With a blinding ferocity beyond any member of its species, the huge, bloated rat launched itself out of the crevice and sucked down the too-slow grass snake in one violent swallow.
The reptile never had a chance.
With its hunger temporarily sated, the rat lumbered away into the brush. It left copious amounts of the strange substance behind, leaving a sickly trail leading into the woods.
The substance squirmed with miniscule life.

Rick McQuiston is a 49-year-old father of two who loves anything horror-related. He’s had nearly 400 publications so far, and written five novels, ten anthologies, one book of novellas, and edited an anthology of Michigan authors.
Rick is also a guest author each year at Memphis Junior High School.
He’s currently working on his sixth novel.