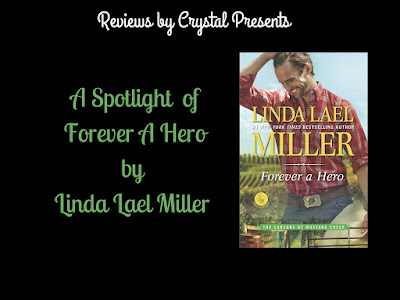 High-powered Los Angeles businesswoman Kelly Wright has traveled all the way to Mustang Creek, Wyoming, to woo the rugged Mace Carson…into selling her a share of his independent winery, that is. But before she has a chance to make her pitch, Kelly’s car nearly slides off a cliff during a rainstorm, and it’s Mace who comes to her rescue. Suddenly, Kelly realizes that this cowboy turned vintner may be much more than just a potential business partner. The final installment in First Lady of the West Linda Lael Miller’s wildly popular The Carsons of Mustang Creek trilogy, FOREVER A HERO (HQN Books; onsale March 2017) is a classic case of country boy meets city girl, but this time there’s a twist—because as it turns out, Kelly and Mace have already met once before, when they were both students at the same California college. It’s been ten years since Kelly and Mace spent a memorable, if not romantic, evening together on campus, but neither has forgotten it. A decade later, and that first impression is as powerful as ever. But Kelly and Mace are both stubborn and fiercely independent professionals and are committed to following protocol, even as it becomes increasingly difficult to resist each other’s charms and keep things strictly business. As they spar over dinner and glasses of mountain wine, Kelly and Mace realize that they just might be a perfect match—in more ways than one. Set against a backdrop of stunning Western mountains, FOREVER A HERO returns readers to the beloved town of Mustang Creek and the Carson family ranch as Kelly and Mace bicker, barter, and discover that a life together may just be an investment that’s worth the risk.

The daughter of a town marshal, Linda Lael Miller is the #1 New York Times and USA TODAY bestselling author of more than 100 historical and contemporary novels, most of which reflect her love of the West. Raised in Northport, Washington, the self-confessed barn goddess pursued her wanderlust, living in London and Arizona and traveling the world before returning to the state of her birth to settle down on a horse property outside Spokane. Linda traces the beginning of her writing career to the day a Northport teacher told her that the stories she was writing were good—that she just might have a future in writing. Later, when she decided to write novels, she endured her share of rejection before she sold her first title to a publisher in 1983. Linda then successfully published historicals, contemporaries, paranormals, mysteries and thrillers before coming home, in a literal sense, to concentrate on novels with a Western flavor. For her devotion to her craft, the Romance Writers of America awarded her their prestigious Nora Roberts Lifetime Achievement Award in 2007, and in 2016 Linda received a Lifetime Achievement award from RT Book Reviews. The Hallmark Movie Channel is currently developing a series based on Linda’s Big Sky Country novels.