The Ryo Myths
by Perrin Pring

Perrin Pring will be awarding a $20 Amazon or Barnes and Noble GC to a randomly drawn winner during the tour. Please use the RaffleCopter below to enter. You may increase your chance of winning by visiting the other tour stops. You may find those locations here.

Crystal: Today I am pleased to host Perrin Pring. Welcome Perrin! I'm so happy to have you here today. Would you share a little bit about yourself with us today?

Perrin: Hi Crystal. Thanks for having me on your blog today. I actually am terrible at these types of interviews. I never know what to say. I will say that I’m the author of The Ryo Myths, a sci-fi trilogy that takes place in a universe that could be our own. When I’m not writing, I’m reading or practicing Brazilian Jiu Jitsu, which is a grappling martial art that I fell in love with last fall. I love to be outside, and green tea brewed with puffed rice is my favorite beverage, followed closely by coffee.

Perrin: As I said, there are three books in The Ryo Myths: Appointment at the Edge of Forever (1), Tomorrow is Too Late (2), and The Degrees of Destiny (3). I’ve got favorite scenes in all of them, but there is a particular scene in The Degrees of Destiny when the reader gets look into Drakier Lu’s (Captain Eri’s former lover) head. He’s stuck in a taxi with people he doesn’t want to be with, going to do something he doesn’t want to do, and the reader really gets to see what he’s made of. I am pretty proud of that section because characterization is my favorite part of the writing process, and I think I did a pretty good job there.

Crystal: Where did you come up with the idea for The Ryo Myths?

Perrin: Well, it came from a lot of places. When I first started to conceptualize The Ryo Myths, I was watching a lot of sci-fi TV shows, including Stargate SG-1 and Firefly, and I was reading Robert Jordan’s Wheel of Time series. At the time, I was also addicted to the BBC’s science section. All these things, combined with whatever else I was reading or watching or doing swirled around in my brain until I finally sat down and started Appointment at the Edge of Forever.

Perrin: I’ve been working on some shorts, but I’m also letting a first draft of a novel marinate while my beta readers attack it. It’s a stand alone book about time travel and food. It’s a love story, and I’m super excited about it. I’ll have updates on my blog.

Perrin: I used to have a job where I had several months off at a time. When I was on my off months, I would wake up, drink coffee and write until I went to the gym. I’d then come back and write more. With my new job I find that I write well before work, if I’m working a late shift. If I’m on a day shift, I tend to work best on the weekends. For me now, it’s a matter of just making the time I can allot to writing count. I love to write and I always find the time, I just have to not waste that time (damn you, Internet cat videos)

Perrin: For current food/time travel project, I did a ton of research. For The Ryo Myths, as I said, I read a lot of articles in the BBC science section. The one that was most influential was the one on rogue planets. I’d never heard of such things, but I learned that there are planets out there which are not in any star’s orbit. What this means is that they are just hurtling through space. Even crazier is that they are completely dark, as they have no sun, so seeing them and detecting them has obviously been difficult. Crazily enough, some of them could have moons, if they have a strong enough pull, so you could have a planet complete with a moon or asteroid belt traveling through the depths of space with nothing to stop it but another very large object.

Perrin: Well, I’ll try most any one who is recommended to me, but some of my favorites are Donna Tartt, Tana French, Flannery O’Connor, Kaui Hart Hemmings, and Octavia E. Butler.

Perrin: Ahh, well to be honest, I never thought I’d get into sci-fi, but I love it. I could see myself writing more love stories, but I’m not sure how far down the ‘romance’ rabbit hole I’d get. I just love stories about people and their connections and a huge element in human interaction is love. I want to put something positive out there, which is why I have a feeling I’ll write more love stories.

Filion felt safe in his role as a Dream Searcher. He was paid to venture into other’s dreams and exert influence over individuals whom he would never meet in the flesh.

But that was until he received The Summoning. Filion has been called to track down and protect Ryo, the last of the Chozen. She is the only hope of preventing a tide of evil driven by the Afortiori and the prospect of universal slavery if they aren’t stopped.

Time is ticking and Filion has no idea of how to find Ryo let alone how to protect her, yet destinies of planets rest in her hands. Enlisting the help of a rag-tag band of mercenaries, Filion will set out to search the wastes for Ryo. Together they will confront an evil whose power they just might have fatally underestimated.

Book Blurb for Tomorrow is Too Late:

I was a natural flier, I could take a punch, and I was smarter than most. Within five years I was a full-fledged pilot. On my last assignment, I was Master Pilot Eri Everfar, commanding pilot of a class B Federal war ship, the Seeker, and that’s where I met him, Drakier Lu…

Filion and his new friends have escaped Bok and are stuck in an asteroid field that isn’t supposed to exist. They’ve almost run out of fuel, their water supply is seriously depleted, all of their food has been destroyed, and the girl they’d just risked everything to save, Ryo, is dead.

Captain Eri’s former lover, Drakier Lu, has been promoted to Master Commander of the entire Federal Fleet, and his assignment is to find and capture the Dark Horse. Captain Eri has been identified as a Tiori, and she and her associates have just become the Federation’s most wanted. Things aren’t what they seem though, and the line between good and evil blurs as the players’ true motivations come to light.

Filion and the crew return, traveling the galaxy and dodging the Federation and the Tioris, all the while searching for a rogue planet that may or may not be harboring the one person who can save them all…

Book Blurb for The Degrees of Destiny:

When I was on Lamu, I inhaled an Afortiori's vileness. That blackness will be what allows me to win. I will use their own evil against them. Because of this I am tainted. I am but a degree different from what I fight, but in that degree, hangs the balance between universal slavery and Free Will.

Having fled from Lamu only moments before its destruction, Filion and his friends find themselves hiding in the shadows as the Federation and the Afortiori mobilize against their worst enemy, The Etulosba and its crew. The Etulosba, Ryo, plans for her final battle. She was engineered to fight for Free Will, but to win that war, she will have to become what no Chozen was meant to be - an Afortiori. Caught in Ryo's wake, Captain Eri is torn between leading her crew and confronting Drakier Lu, her former lover and torturer. Will she be able to overcome what he did to her, or will she fail, thereby becoming what he made her and letting down Ryo, her crew, and ultimately, the universe? Filion and the crew return in the final installment of The Ryo Myths. Join them as they begin a journey that not all of them will survive.

The universe, as we know it, was created as a result of an exercise of thought. In another dimension, far away from here, there is a race of beings known as the Eoan. The Eoan world is nothing more than clouds of raw elements, those elements constantly crashing into one another. The Eoan are the energy that propels these clouds.

Do not assume, however, that the Eoan are a primitive race. It was the Eoans that created our universe. They sought a challenge. They sought to create something merely because they willed it to be so, and from their will our universe was born, but this was only the first step.

A universe without life is barren. Each Eoan took it upon itself to create a world within the universe. There were no set parameters as to what each Eoan could or could not will into existence. The only limits were each Eoan’s imagination. Planets, bacteria, plants and animals followed.

Eventually, the Eoans created free will, and then the Eoans were faced with a dilemma. We would call it a ‘moral’ dilemma, but the Eoans wouldn’t go so far. Did they want to continue to craft and manipulate a universe whose inhabitants were able to think, create, and destroy on their own? Some Eoans fervently believed that our universe was theirs – that the Eoans could do what they wanted because they had made us. But a growing number of Eoans were developing a sort of conscience themselves, which was a surprise. To suddenly feel responsibility and guilt, as muted as it was, was a violent shift for some of the Eoans.

Consequently, the Eoans split. A small faction, the self proclaimed Afortiori, believed that they had the right to continue to manipulate our universe as they pleased. The majority did not believe this. The Eoans and Afortiori went to war. 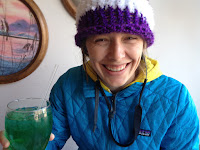 Perrin is the author of The Ryo Myths, a sci-fi/fantasy trilogy that has been heralded to engage both nerds and non-nerds alike. Check out her books on Amazon and Barnes and Noble. When not writing, Perrin enjoys drinking coffee and swimming, although usually not at the same time.


a Rafflecopter giveaway
Posted by Reviews By Crystal at 2:00 AM