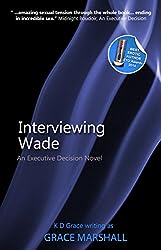 The Executive Decision Trilogy may be over, but the story continues in this addictively sexy fourth instalment by the best-selling Grace Marshall.Ambitious reporter Carla Flannery has been waiting to make her name – and when she gets the chance to interview Wade Crittenden, the mysterious genius behind Pneuma, Inc, she can’t believe her luck. However, Carla has made a lot of enemies in her work, and when Wade discovers she’s being stalked, he is determined to keep her safe, spurred on by his confusing feelings towards her. As situations turn deadly and dark secrets threaten to reveal themselves, lives and hearts are on the line as the interview starts to reveal far more about them than either ;everexpected …


Grace Marshall lives in South England with her husband and the growing gang of hooligan birds who frequent their feeders. When Grace isn't busy writing something sexy and romantic, she's busy digging in her ever-expanding veg garden or walking across the British countryside. She finds inspiration outdoors in nature, and most of her best story ideas come to her while she's walking or gardening. Grace is the author of the fast paced, quirky Executive Decisions Trilogy published by Xcite Romance. The first and second novels in the trilogy are out now. Grace Marshall's alter-ego, K D Grace, writes critically acclaimed, best-selling erotic romance. Whether it's sexy romance or romantic sex, between The Graces, there's a story for you. Find her books here. Find Grace here: On Facebook: http://www.facebook.com/GraceMarshallRomance On Twitter: http://www.twitter.com/GM_Romance
Posted by Reviews By Crystal at 12:30 AM