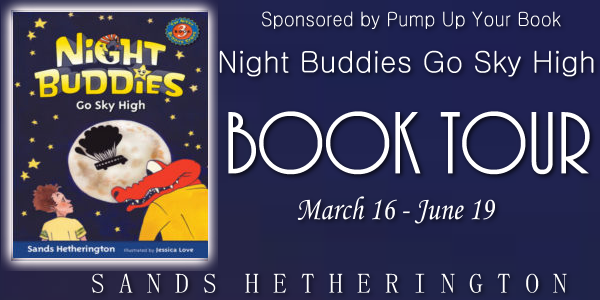 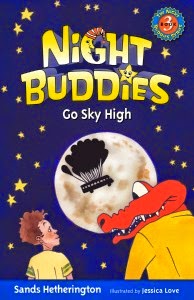 Young John Degraffenreidt and his red crocodile buddy, Crosley, show up at the Pineapple Cheesecake Factory and find Big Foot Mae lying on the floor, staring up at her Great Star Puzzle on the ceiling. Crosley only wants a new supply of pineapple cheesecakes, but what Mae points to on her ceiling will start the Night Buddies on a totally new fantasy adventure. A suspicious white dot has passed through the Corkscrew Constellation and is now moving underneath the Hound Dog Stars. Across the Borough, Crosley s brother Crenwinkle sees the same curious speck in the sky. It looks to be a long night for sleepyhead John, but thanks to the time spreader dingus with its sleep retardant setting, he gets right into their next escapade. Join the Night Buddies as they embark on another Program, this time taking them all the way into the stratosphere in their racing blimp.

Discuss this book and tour on Goodreads: https://www.goodreads.com/topic/show/2241493-night-buddies-go-sky-high-by-sands-hetherington

Sands Hetherington, creator of the Night Buddies series of chapter books, credits his son John for being his principal motivator. Sands and young John developed the Crosley crocodile character in the series during months of bedtime story give-and-take. They collaborated many nights on escapades starring John and Crosley, until eventually it occurred to Sands why it was that Crosley was bright red. That was when the first book came together.

Sands raised his son as a single parent from the time John was six. He read to him every night during those formative years: all of the classic children’s stories from Aesop through the Grimms, Lewis Carroll, Frank Baum, Tolkien and Dahl, with a lot of Dickens and Hugo thrown in. When school was out they got in the car and toured Alaska, Canada and most of the contiguous states. John still gets around. So far he has lived in Germany, Scotland, Russia, England and Spain.

Dogs have always been a part of the author’s life, beginning with Whiskers, a cocker spaniel. When his wonderful boxer Hube died, he despaired of finding a boxer who could match him, and instead got a Saint Bernard. He ended up breeding Saints for a number of years and at this point has had twelve as house pets. Sands says dogs can do you a power of good, and if you lose one, go out and get another the next day and you will be surprised at how fast your grief goes away.

Sands is also a Civil War buff. He would like to spend a month of evenings with common soldiers from both sides to see how they felt about the business. And eccentric generals like Jackson, Sherman and Forrest, and most of all Lincoln. Because Lincoln never gets to smile in his pictures.

The author was born in New York City but was transplanted a year later to Greensboro, North Carolina, where his maternal grandmother lived. He never really left the area and has a lot of the South in him. His grandmother was a prominent educator and became a great friend and mentor.

Sands majored in history at the University of North Carolina (Chapel Hill) and has an M.F.A. in creative writing and an M.A. in English from UNC-Greensboro. He lives in Greensboro now, and hangs out with his longtime friend Ann and their Saint Bernards Dudley and Maggie. He likes visiting ancient Mediterranean sites in Turkey and Italy, and most of all Greece.

I have been an avid reader since I was a child. I don't remember a time when I didn't love reading. It isn't often that I get a chance to read a book that takes me back to my childhood. Night Buddies Go Sky High is a fun adventure story that give you plenty of fuel your imagination.

Night Buddies Go Sky High  is a cute story with fun characters that made me laugh throughout the story. The plot is a fun adventure that I think will keep young readers intrigued. I think they will enjoy John and Crosley's adventure as much as I did.

If you are looking for a fun adventure story for your young reader I would recommend this humorous adventure story. I have not read the other books in the series however I have a feeling they are probably just as much fun as this one is.

The author has done a great job of describing the characters, the different places they visit, and the messes they get into. The pencil drawn illustrations are cute and help add to the storyline.