Giveaway:    $20 Amazon Gift Card. Please use the RaffleCopter below to enter.

The Best Prank I Ever Pulled!
By Patrice Lyle


“Guess what, Dad? I finally sold one of my scripts!” I blurted out the fake news to my father over the phone on April Fool’s Day in 1998 from our apartment in Ellicott City, MD.

“That’s great, Patrice! Which script?” My dad’s enthusiasm rolled through the airwaves, all the way from Oregon.

“Wow! What amazing news! Congratulations!” He paused, undoubtedly to take a sip of diet Pepsi. “Who bought it?”

“This awesome film production company out in LA. They’re fairly new, but they think they’re going to get some big name actors to star in my script.”

“I can’t wait! Will they let your family visit the set?”

I paused. “Yes, and no. That’s the one weird part about this deal.”

“What do you mean?” His tone quickly changed from proud dad to homicide investigator.

“Well, they’re on a tight production budget so for some reason the only place they can afford to film the movie is in Iraq. So I’ll be going to Baghdad for a month.”

Then the fireworks started.

“Baghdad? That’s crazy, Patrice! Iraq’s a very dangerous place. Americans get kidnapped and killed over there all the time!”

“You’ll have other chances, I promise! This is too dangerous.”

“I’m sure I’ll be fine, Dad. I’ll register with the US Embassy when I arrive.”

“That’s not going to save you from being kidnapped or killed!”

“No, you don’t. You can’t risk you life for your script.”

I let out a big sigh. “There is one other thing.”

“What?” His voice was tense.

I paused and then let out a big, “April Fool’s!” 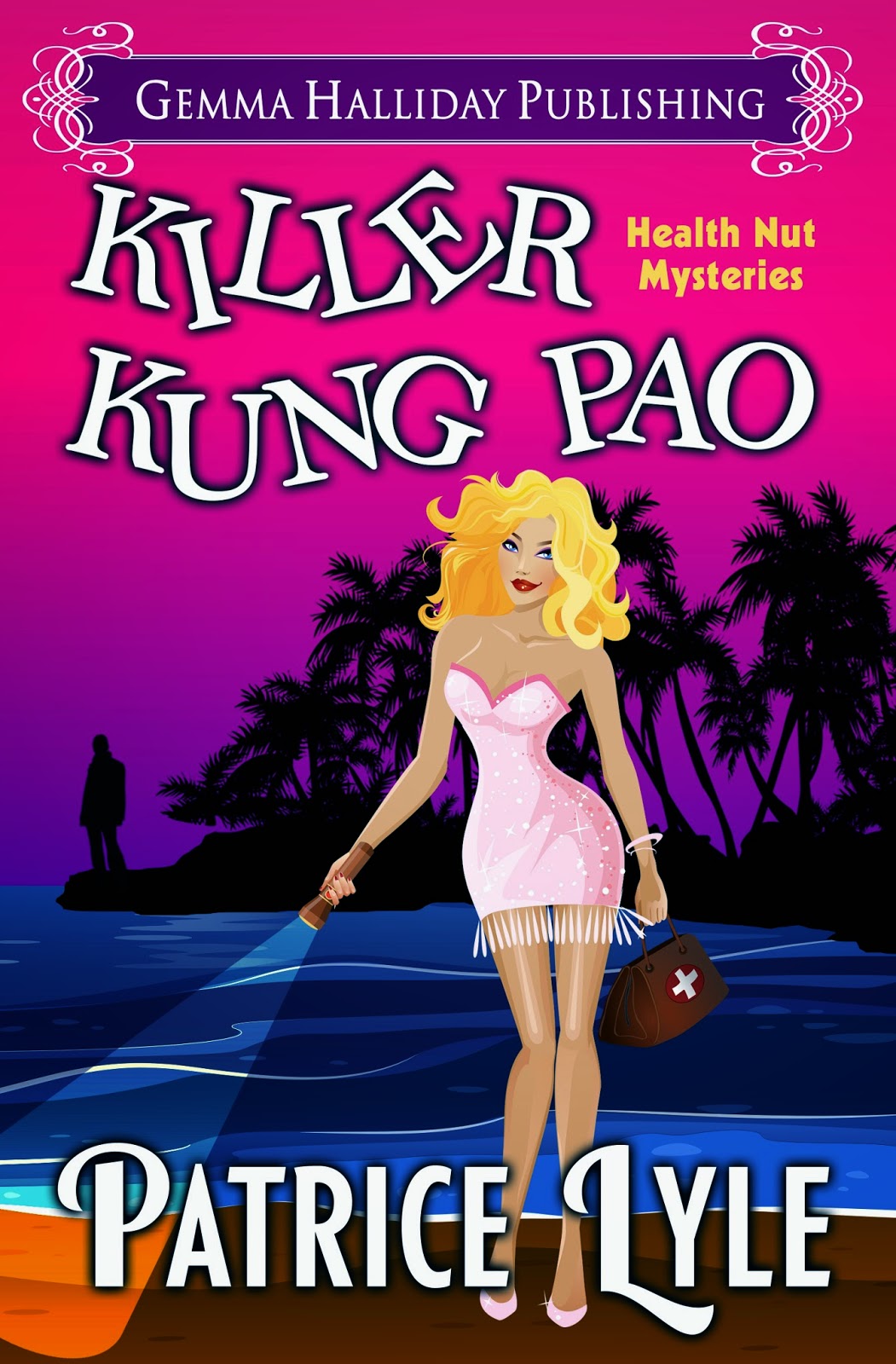 Dr. Piper Meadows heads to the Body, Mind & Spirit Expo expecting to solve health problems, not murder. But her first day starts off wrong when famous psychic Mystic Ming compares her hair to a "dung beetle's nest" and tries to get her kicked out of the show. But Piper's bad-hair day gets worse when her Aunt Alfa gets in a public scuffle with Mystic Ming, where he accuses her of trying to poison him with her peanut oil-based essential oils. When Mystic Ming drops dead from his serving of killer kung pao laced with peanut oil, it's no surprise that Aunt Alfa is fingered as the prime suspect.  Unwilling to let her auntie squander her golden years in prison, Piper orders a set of How To Be a PI flashcards and sets out to find the real killer. Secrets and suspects sprout up faster than wheat grass, including a handsome tattoo artist, Tattoo Tex, who intrigues Piper more than she'd like to admit. But can she trust him? Piper had better solve the case of the killer kung pao before the murderer turns his sights on victim number two...one sleuthing doctor!

My aunt was the most adorable health nut ever. Clad in her size-two teal velour pantsuit, matching foam rollers, and red, patent-leather Mary Jane pumps, she strutted across the beige carpet pulling a neon green duffel roller bag and munching on a gluten-free Cosmic Cupcake (her favorite). She hadn't changed at all—including her hennaed hair—in the last three decades. And I hoped she never would.
"Hey, Pipe." She planted a kiss on my cheek. "You'll never guess what happened on our walk. It was the craziest thing."
Even though it had only been a couple hours since I'd last seen her, I gave her a quick hug. "I was wondering where you—"
And that was when I noticed the suspicious pink snout sticking out of the side zipper of Aunt Alfa's bag. Oh, holy chocolate babka to the nth degree.
"You heard that yoga girl at registration," I said quietly. "Animals aren't allowed in here, and we have to follow the rules."
She pursed her lips as if she were sucking a lemon, which she did every day because lemons are great for the liver, and pointed at a woman nearby who was accompanied by a guide dog. "Check out that dog. Studies have shown pigs are fourth on the intelligence roll, behind humans, primates, and dolphins."
I was familiar with the study because she talked about it all the time.
"It's rude to point." I gently lowered my auntie's arm before someone noticed her. "That woman is blind, Aunt Alfa. Guide dogs are always allowed."
"I know." Aunt Alfa crumpled up her Cosmic Cake wrapper and tossed it into a nearby trashcan, making the shot like a basketball star. "Our piglet should be allowed too because he's smart enough to be a guide pig. Besides, I'm ninety-one years old. I defy anyone to stop me."
A nonagenarian with a 'tude was what her dead ex-boyfriend had called Aunt Alfa during the nightmare séance. I feared he might have been on to something.
"I don't like it either, Aunt Alfa, but you have to take Brownie to our room."
"You know how depressed he gets alone. He'll pig out." She jutted out her crepe-paper jaw. "I can't believe I forgot Charlotte's Web. That's the only movie he likes."
Finally, progress. "Actually, he loves Babe, and I brought the DVD with me."
"Really?"
"Yeah. We watched it last weekend, and he sniffled at all the sad parts." I'd been in major Floyd-avoid-mode so I'd spent my Friday night curled up with a movie, a bag of dark chocolate chip cookies, and a piglet.
Aunt Alfa shot me her pity grin. "He was just being polite, Pipe."
That figured. Guys were all the same. Even the potbelly breeds.
Aunt Alfa rose on her toes and glanced around the room. "I'm going to find the manager and force him to see things my way."
Oh, no. Had I made a mistake insisting she come? I'd worried about her starting a riot at my condo complex while I was gone, but I hadn't considered the consequences at the expo.
"You have to take Brownie to our hotel room," I said. "Seriously."
Brownie must have recognized his name because just then a high-pitched, someone's-murdering-me piglet squeal erupted from her bag.
Weee. Weee. Weeeeeeeeeeee.
Several people turned in response. One woman having a tarot card reading by the yellow-turbaned psychic looked perturbed and asked, "Was that… a pig?"
Then a sneeze louder than a New York City firework festival rang out. Followed by a coughing attack.
"Mystic Ming allergic to pig," a familiar voice choked out. "Ming berry berry allergic to many things."
I turned to see Mystic Ming wobbling in the aisle across from me. Then his skinny legs buckled, and his face lightened to the shade of a marshmallow.
Right before he collapsed onto the expo floor.

Patrice Lyle loves green smoothies, dark chocolate, mysteries, and humor. She wove these elements together when she created the Health Nut Mysteries, a cozy series about a naturopathic doctor who solves mysteries at health expos. Patrice also writes paranormal young adult and middle grade fiction, as well as holistic medical suspense. She has an MA in Writing Popular Fiction and a PhD in Holistic Nutrition. She's also a Certified Traditional Naturopath. She now lives in Florida with her husband and two kitties, and is a firm believer in the theory that laughter is the best medicine.