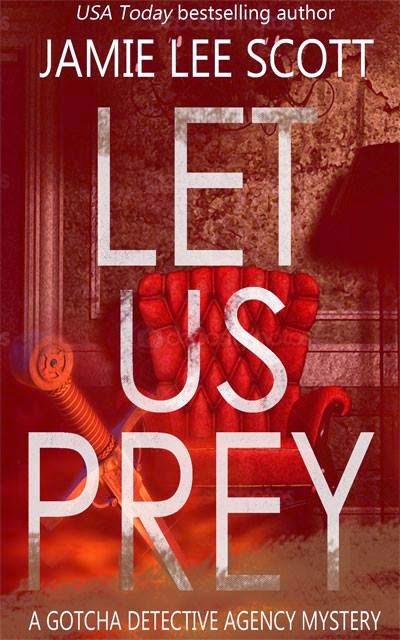 Mimi Capurro is trying to put her life back together after the sudden death of her husband. Using the skills she learned as a secret service agent, she runs the Gotcha Detective Agency, along with her skilled computer forensics partner Charles Parks. Gotcha specializes in executive protection (bodyguards), and tailing cheating spouses.

Nick Christianson is running from the demons of his past, and that has put him back in his old stomping grounds in Salinas, CA. Nick has transferred from the San Francisco Homicide Division and is now adjusting to this new police department.

Mimi never expects to run into her old college flame Nick, when she takes on an executive protection case for New York Times bestselling author Lauren Silke. But when Lauren’s assistant is murdered, the homicide case, along with Mimi, land in Nick’s lap. Will Mimi and Nick be able to solve this murder without killing each other first? 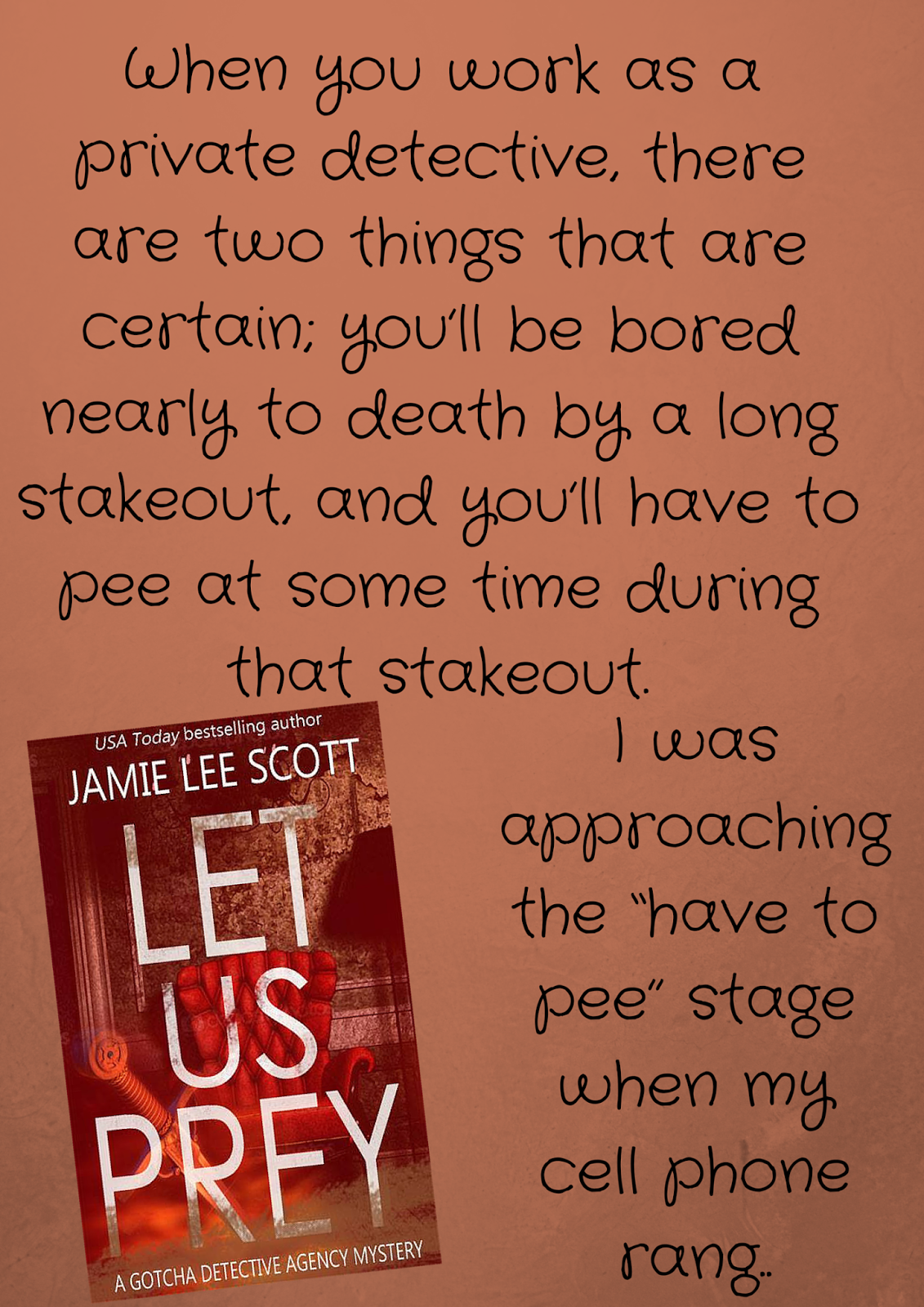 I’m pretty sure I had a fan-girl moment, but I did my best to hide it. I was shaking hands with the New York Times bestselling author of the Sophie Nolan vampire series. I had every book in the series. Well, I didn’t have the latest, but as soon as it hit bookstores I would.
“Wow, I’m a big fan.” I just had to say it.
“Thank you.” Lauren indicated the waif standing beside her. “This is my assistant, Esme Bailey.”
I turned to the girl with the large sapphire eyes. Her fine, straight, black hair was worn in a precise bob. She was tall and thin and a shade too pale. Her hollow cheeks and thin red lips made her look even thinner. I had to envy her style with her black thigh high boots and miniskirt.
“Esme. Hi.”
Esme gave me an overenthusiastic handshake.
“Oh, thank you so much for meeting us at the last minute. Charles has been such a doll in your absence. And he assures us that taking us as a client will be no imposition. I’m so sorry for the last-minute meeting.”
Was this girl on crack? Her movements were steady and fluid, but she spoke so fast I could hardly keep up. And when she said Charles had assured them I’d take the case, the words really began to blur as my mind whirled.
I glared at Charles again.
“Well, ladies, now that you’ve met, I’ll just go grab you some coffee and cookies.” Charles nearly ran from the room.
Charles, a fop if ever there was one, wore creased khaki slacks and a lavender polo shirt. I could see the lavender in his argyle socks as he left the room.
I’m pretty sure my Doberman, Lola, heard Charles say cookies because she stood from her bed in the corner of my office, performed a downward dog, and trotted to the kitchen. She didn’t even acknowledge me.
I went around my desk and sat. “Okay, so exactly what is it I’m taking on here?”
Lauren settled back in her chair, and as she did I noticed something a little off about her coloring. I couldn’t quite place it.
Esme sat forward in her chair, her long legs twisted like spaghetti noodles. She seemed anxious.
“Okay, so you know who Lauren is?”
I smiled. “I do.”
“Oh, good, that will make this faster. So you know about Sophie and the vampires. Well, then, um, you also know that in the last book, Lauren killed off a long-running character. I mean she had to, there were just getting to be too many characters to keep track of. But I digress.
“Okay, apparently some of her loyal fans aren’t thrilled with the story line lately. And this last weekend Lauren was speaking at a paranormal writers conference—“
“I was on a panel. Not really speaking. My presence was considered to be a great draw for some reason.”
“And, long story short, she got the shit beat out of her in the bathroom. By a lady claiming to be her fan of all things.” Esme was wide eyed, and now nearly tipping off the chair.
Lauren glared at Esme, but said nothing.
That was it. The makeup on Lauren’s face was thick. Very thick because it was covering bruises. And when I looked closer I could see just a bit of red on her eyeball.
“Oh my God. How on earth did that happen?”
Now Lauren sat forward in her chair. “I went to the bathroom, and this lady apparently followed me in. We were the only two in the bathroom, and I didn’t think anything of it. I mean, why would I?”
Esme interrupted. “And the woman waited until Lauren was in the stall and had her pants half down, then she kicked in the stall door.”
“Did you have any idea who she was?”
“Not a clue,” Lauren said.
“Anyway, she knocked Lauren out cold.”
I leaned forward. “Holy shit.”
Lauren laughed. “That’s exactly what I thought when I came to. But the woman was gone. I vaguely remember her saying she was pissed off about something, but I can’t for the life of me remember what she said.”
“Did anyone find the woman, or walk in while this was happening?”
Blushing now, Lauren said, “No, a woman did come in moments later and found me on the floor with my pants down. God, it was humiliating.”
Esme laughed. “But good publicity.” 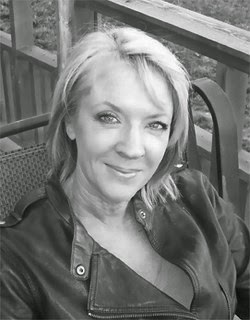 USA Today Bestselling author, Jamie Lee Scott, loves killing people. I mean writing a good mystery, or a good romance. She lives in the Midwest with her husband, two dogs, two cats, and three horses on a small farm. When she's not writing novels she's writing screenplays and making indie films, or competing at barrel races.

10 Fun Facts
1. I once played in a televised poker tournament.
2. I'm terrified of heights, so I went zip-lining, repelled down a waterfall, and walked across a rope bridge, to prove to myself I could.
3. I own a fast food restaurant with my husband.
4. I wrote my first novel in the 5th grade.
5. I want to be Charles. (if you've read the Gotcha novels you'll understand)
6. I sucked my thumb when I was a kid.
7. When I'm alone in the car, I crank the music and sing at the top of my lungs. I don't care who sees me.
8. I have a world class crush on Benecio del Toro.
9. I've had a Twitter addiction since 2009. (I may need intervention)
10. I hate sharing my food off my plate.