Q: What are you currently working on?
A: I’m just finishing up the final Hometown Players book and editing the next book in the San Francisco Thunder series, Slammed.

Q: Where did you come up with the idea for either your current release or your current WIP?A: Score came about because I’m a sucker for second-chance romance and I wanted to write one involving the ultimate hockey bad boy. I also wanted to write about a player who seemingly has everything (A Stanley Cup, money, friends, family) but has to deal with something (a terminally ill, much loved parent) all his fame and fortune can’t fix.

Q: Do you have a favorite snack that like to munch on while writing? If so would you mind sharing what it is with us?
A: I don’t eat much while writing, but I chow down while editing. Cheez-its or peanut M&Ms are my favorite editing snacks.

Q: When you are not busy writing wonderful stories to keep us lucky readers entertained, what do you like to do? Do you have a hobby?
A: I love hiking all the great canyons in Los Angeles where I live. I try to do it three times a week. It’s exercise, but it’s also great for people watching. L.A. is filled with colorful characters and they all seem to hike! I also love beach days and will often head to the beach for the day after I finish a book to clear my head and just relax.

Q: Do you have a favorite background noise you like to have going while you write (TV, music, kids playing)?
A: I’m the weirdo who likes silence when I write. But because I live in a city and can’t control all the noises, I also sometimes throw on some music. I have one playlist I write to no matter the book. It’s got a ton of ’70s music on it and some Canadian bands like Tragically Hip and Our Lady Peace. 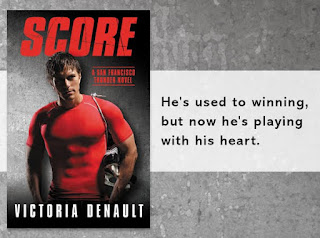 He's used to winning, but now he's playing with his heart.

Jude Braddock. Hockey god. That's how everyone sees him now. But when they were teenagers, Zoey knew him as the kid who didn't have enough nerve to make a move on their one and only disastrous date. Seems he doesn't have that problem anymore, though. According to the rumors, he's with a different woman every night. After a rough divorce, the last thing Zoey needs is more heartbreak. But Jude's cocky, playful attitude is mighty hard to resist.

Jude knows he isn't built for long-term relationships. But he's getting sick of women pounding on his door in the middle of the night looking for a rematch. When Zoey comes back into his life, it's like fate has given him a second chance. He'll do anything to make her happy again. Is this what love looks like? He has no idea. All he knows for sure is that this time, he's playing for keeps. 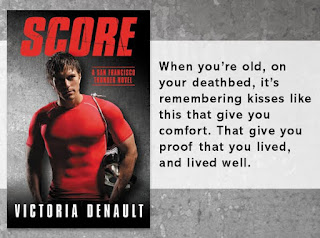 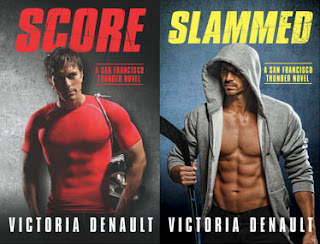 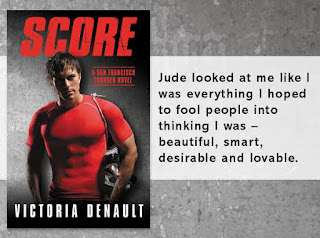 Victoria Denault loves long walks on the beach, cinnamon dolce lattes and writing angst-filled romance. She lives in L.A. but grew up in Montreal, which is why she is fluent in English, French and hockey.

Posted by Reviews By Crystal at 1:53 AM