#ReleaseDay #SpotLight ~ Joy to His World By Clare Dargin ~ @claredargin 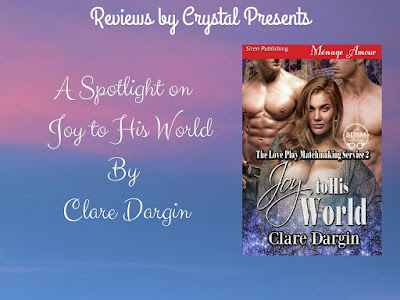 Chris Spinell, Jilly Reimers, and Chris 'Nate' Poole are happily married. Now, living in a small town run by The Love Play Matchmaking Service, Chris Spinell hopes his family is safely away from the possible dangers that come from living in a big city.

When a stranger comes to town seeking to harm Jilly and Nate, Chris' protective instincts are put to the test. Will he deal with this reasonably, or will he do whatever it takes to defend his family, including breaking a solemn oath?

He thought about how far his life had come in such a short time. In less than ten years, he’d gone from an ex-Special Forces soldier searching for his place in the world, to an MIT graduate, to owning the second largest independently owned and operated software integration firm in Michigan. But all of that was nothing compared to the real change that happened when his sister had recommended that he join a dating service to cure his less-than-stellar love life. And Love Play had done that and much more. In their own mysterious way, they’d managed to look into his heart and find the man and woman of his dreams. Literally. The images of Jilly and Nate had haunted his dreams after he returned from Afghanistan. During that time, he didn’t know it was them, but after he met them and they spent the night together, he knew they were the ones

How his Eros, his matchmaker at Love Play, had known baffled him. Nevertheless, he was profoundly grateful that the man or woman, or whoever his Eros was, had put the three of them together. Now, they were married, and he was happier than he’d ever been in his life. Add to it that their love had become so deep that it had blossomed into a beautiful dominant-submissive relationship with them.

The car’s internal phone rang. It was Jilly. He pressed the icon on the car’s dashboard screen and answered.

“Hi, honey, what’s up?” he asked. He was always glad to hear Jilly’s voice.

He grasped his chest, hoping the ache would fade as he longed to see her.

“I was going over the arrangements for the party,” she said. Her sweet voice was a dulcet tone that calmed him.

“I’m thinking about how people should dress,” she said, “and the basic rules for the party.”

“High protocol is not something we do, but there’s no reason that should stop other Doms from having that with their submissives. As for clothing, you know my rules for you, too. You aren’t allowed to wear anything too revealing. The only person allowed to see your ass is me and Nate, and that’s when he’s not in trouble.”

It wasn’t as if he made them walk around with bolts of fabric hanging off their bodies, but their sexuality belonged to him.

“Dueño, that was a long time ago,” Nate said, pouting.

Right after Chris had collared them, Nate bought Jilly a pair of tight jeans, high heels, and a shirt that was so form fitting it showed everything the Lord had blessed her with in the chest and told her to wear his prized choker collar. Chris had damn near had a heart attack when they came home from a late lunch in Cutlerville.

Nate grinned and asked, “Doesn’t she look hot?” Once he’d regained the ability to speak, Chris’s only reply was, “Not as hot as your ass is gonna be once I hit it with my flogger.” He ordered them both to the bedroom, flogged Nate’s ass, paddled Jilly, then fucked them without allowing either of them to orgasm. To teach Nate a lesson for encouraging Jilly to dress immodestly, he hadn’t been allow to see her bare ass for two days or have sex with her.

Nate also had to cover his eyes with his hands when Jilly wore no clothes for two days. Whereupon, Nate vowed to never encourage her to wear inappropriate clothing again.

“Dueño, I know what your rules are for us. What about the party? Kink for everyone?”

“This is casual, vanilla only. Leather is permitted but please do not go all out,” Chris said.

“How are you feeling?” he asked, worried. “Still feeling worn down?”

She was at home trying to get over the remnants of a cold that lingered, giving her all sorts of problems like a fever and upset stomach. She’d feel good one moment, and then, wham, she’d have to rest because she’d be too tired to move. Despite his protests, she refused to go to the doctor again.

He sighed. “Don’t wear yourself out today. Get some rest. That’s an order. If you aren’t better by tomorrow, we’re going downtown.”

The DMC, Detroit Medical Center, was the major medical complex in the area. It was over an hour away, and he would gladly drive her to find out what was wrong. He was not willing to risk her well-being for her selfish pride or a dumb party. He hated when she was not feeling well or was in pain. He wanted to be able to shield her from the worst the world could give so she’d be able to live a life of love and happiness. She deserved that much and more. To say he loved her would be an understatement. Heck, it wouldn’t even describe the depths of his intense feelings for them. They owned him as much as he owned them. It didn’t feel right if they weren’t healthy and safe.

“I’ll call you later on to see how you are doing,” Nate said.