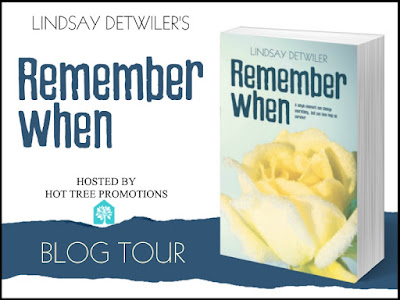 Remember When
By Lindsay Detwiler

This wasn’t how it was supposed to be….

They met at a wedding, Todd the only man wearing jeans, Jessica the beauty with a troubled background. Settled into married life after falling in love, they have so many things left to do in life. They think they have so much time… until Jessica and Todd’s average married life comes to a halt on a snowy back road. When their truck careens down an embankment, they find themselves in a life-or-death situation. With rescue seeming impossible, they cling to the only hope they have left: their love for each other.
As they fight for survival, their connection carries them through the biggest challenge of their lives. Memories and regrets swirl around the couple as they finally take a moment to reflect on what they’re doing in life.

There’s one big, icy question that haunts them, though: Is this where their story will end? 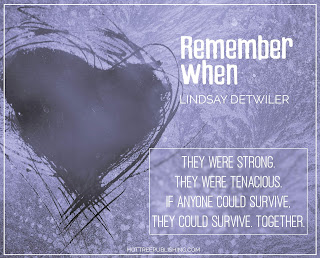 Together, they were a functioning but crazy couple, living in the adult world of responsibility but straying from the normal every now and then to experience life to the fullest.

Together, they could get through anything. She had to cling to that.

She perked up at the thought of having some temporary relief from the cold as Todd wriggled to get closer to the driver seat, being careful to not jiggle his leg too much. He reached over to the keys, turning it with a whispered “Please.”

“Shit.” He slammed the dashboard in frustration. His temper was always one of his flaws.

“Let me try,” she uttered, reaching for the key in his hand.

She shoved him away, trying the key herself, whispering “Please.” If her toes weren’t so damn cold, she’d cross them all in hopes of the engine coming to life.

She turned the key and laughed at her luck. The engine chugged to life.

“Wrong again,” she gloated, a huge grin on her face.

“You know, I should push you out in the snow.”

The smile stifled itself at his words, even as the sound of the engine underscored her hope, emphasized the soon-to-be warmth that would be theirs.

She didn’t respond to his statement, lost in her own bout of regrets and guilt.

“Jess?” he asked finally, concern in his voice.

She warmed her hands in front of the heater. It already felt heavenly, even though it wasn’t even close to being completely warm. Finally, she responded in a disconsolate voice, “Probably should. This is my fault.”

“Hey, stop it. Don’t blame yourself.” He put a hand on her arm, shaking her a bit.

“We might still have ended up here, or worse. Things could be worse. We could’ve hit a tree head-on. By some luck, we landed right between them. It’s all okay. It’s all going to work out.” He, too, rubbed his hands in front of the heater.

“I love you,” she whispered, still feeling guilty, still not quite believing him. This was her fault. She’d messed up, big-time. Who knew what price they’d pay for it.

She smiled again, leaning against him as she basked in the warmth of the heat radiating through her fingers. They sat, wordless, reveling in the simple but heavenly feeling.

Todd interrupted the silence a few moments later. “You do know, when we get out of this, I’m never letting you live this down.”

She groaned, shaking her head as she pulled away from him. “You just said it’s not my fault.”

“Of course I did. Because right now, I can’t blame you or I look like a dick. Later, though, oh man, is this going to be a great addition to my amateur comedic stand-up at parties.” 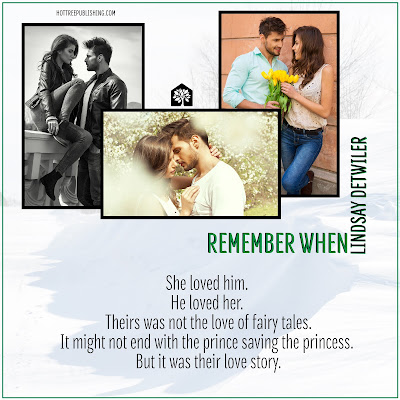 A high school English teacher, an author, and a fan of anything pink and/or glittery, Lindsay's the English teacher cliché; she love cats, reading, Shakespeare, and Poe.

She currently lives in her hometown with her husband, Chad (her junior high sweetheart); their cats, Arya, Amelia, Alice, and Bob; and their Mastiff, Henry.

Lindsay's goal with her writing is to show the power of love and the beauty of life while also instilling a true sense of realism in her work. Some reviewers have noted that her books are not the “typical romance.” With her novels coming from a place of honesty, Lindsay examines the difficult questions, looks at the tough emotions, and paints the pictures that are sometimes difficult to look at. She wants her fiction to resonate with readers as realistic, poetic, and powerful. Lindsay wants women readers to be able to say, “I see myself in that novel.” She wants to speak to the modern woman’s experience while also bringing a twist of something new and exciting. Her aim is for readers to say, “That could happen,” or “I feel like the characters are real.” That’s how she knows she's done her job.

Lindsay's hope is that by becoming a published author, she can inspire some of her students and other aspiring writers to pursue their own passions. She wants them to see that any dream can be attained and publishing a novel isn’t out of the realm of possibility.
Facebook I Twitter I Website

Posted by Reviews By Crystal at 12:41 AM