#SpotLight Claimed by the Vampire, Seduced by the Werewolf By @KryssieFortune 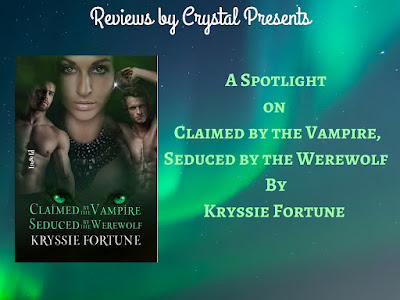 Claimed by the Vampire, Seduced by the Werewolf
By Kryssie Fortune

After seven centuries, Elias, a former Spartan turned vampire, finds his eternal bride.
Seth, Elias’s werewolf half-brother, scents his mate.
Vampire and werewolf loath each other. The only thing they agree on is that Tempest is their mate—and they’re not sharing.
A prophecy will force Tempest, a twenty-first-century witch, to choose between them. As the half-brothers vie to win her heart, they teach her about spanking, the way pain heightens pleasure, and multiple orgasms.
A vampire can’t survive without his fated bride. A werewolf dies if he loses his mate
Their future rests in Tempest’s hands. Which one will she choose?
Buy Links:
loose-id


Tempest had given him her body and her trust. She’d even bought him clothes. For a Spartan who’d grown up with nothing, that meant the world, but he wanted to give her something back. Spartan warriors trained as diplomats, poets, fighters. Elias’s online research led him to poetry competitions with cash prizes. Before he left to collect his clothes, he entered three. He wouldn’t win much, but it would help refund the expenses she’d incurred on his behalf.
As he pirouetted in front of the mirror, he delighted in his new clothes. Of course, he’d not wear them for long once Tempest arrived home. He’d strip her slowly, letting his lips linger on her breasts before he teased and tormented her into sensual bliss. Finally, once she couldn’t think for desire, he’d lay her on the bed and fuck her hard.
Earlier, when he’d thought about his bride, he’d craved her body and her blood. Her presence warmed and completed him, and he’d never felt so content. As he watched the clock creep toward two p.m., his vampire senses tingled. Tempest, his bride, had given him her blood. While that wasn’t a complete bond, it was enough for him to realize something dangerous stalked her. He needed to find her and protect her, fast.

Tempest glanced around Seth’s air-conditioned trailer in awe. The polished wood furniture, comfortable leather sofas, and separate cooking area could give any luxury apartment a run for its money. A few bits of harness and a broken set of reins sat alongside a roll of duct tape on a side table, clearly waiting for a repair job. A polished oak door closed off the rest of the rooms.
Seth draped his arm around her shoulders. “There’s a double bedroom and a solar-powered shower lurking farther inside. Say the word and we’ll try both.”
She shrugged him off. “I’m sorry. There’s already a special man in my life.”
Seth moved in closer, trapping her between him and the sofa. She sat down hard. He settled beside her and again drew her into his arms. “I’ve wanted to taste your lips all afternoon. I won’t wait any longer.”
Accepting his offer of coffee had been stupid. She knew that now. Eyes closed, she tried to picture Elias. Major fail. Her confused emotions showed Seth cradling her in his arms. She shouldn’t lust after him, not with Elias waiting for her at home.
Seth’s delicious scent—all fast-flowing rivers overlaid with the scent of ripening corn—pulled her in like a lure. His solid muscles made her want to run her hand down his torso. She loved his dimpled smile and kept stealing glances at his tempting lips. Part of her wanted to taste him right back. Damn it, I’m not a sleep-around kind of girl. With Seth, her wicked intentions punched a hole in her good-girl persona.
Determined to resist him, she shoved at his shoulder. Undeterred, he lowered his head toward hers. She ran her tongue over her lips and puckered up for him. Surely one kiss—one tiny taste—won’t hurt. Leaning toward him, she buried her hands in his curls and tugged him closer. He smiled as he moved in for his kiss, a butterfly caress that whetted her appetite and made her greedy for more. Kissing Seth seemed sensual and abandoned, a taste of forbidden fruit she couldn’t resist. Didn’t want to, really. One gentle sweep of his tongue over the seam of her lips, and she opened for him, inviting him into the damp heat of her mouth. Another moan escaped her, soft, low, and desperate. She needed him inside her, screwing her hard.
Pulling back, he cupped her cheek and gazed down at her face. His intensity, his need, and his determination to claim her showed in his eyes. She’d never felt so alive—and excluding last night—so desperate for sex.
As if in slow motion, he lowered his lips back to hers, plundering her mouth for kisses the way a pirate did treasure, and slid one arm beneath her thighs. He rose to his feet and sat her, legs open, on the table. She supported herself by putting her hands behind her as her legs dangled over the edge.
Seth shoved her skirt up her thighs, stood between her legs, and untied the bow on her blouse. The unadulterated joy in his gaze made her think of a little boy unwrapping a long-awaited Christmas present.
Thank the Goddess I’m wearing my raciest bra and panties. Her pulse rate rocketed as Seth kissed his way down her neck and ran his tongue over her breasts. It felt raspy and rough over her skin.
A needy shiver ran down her spine as he slid her blouse from her shoulders and unfastened her bra. She sat with her skirt pulled over her thighs and her torso bared for Seth’s delight. Forgetting everything except the deliciously sinful man who held her with reverent intent, she curled her arms around his neck. He’d protected her in the parking garage, comforted her, and now his lips dominated her into sweet submission. Head spinning, she clutched at his shoulders. Her pussy filled with her intimate juices, and her nipples stood like scarlet beads atop her generous breasts.
“More,” she gasped. “I need more. Make it hurt.” 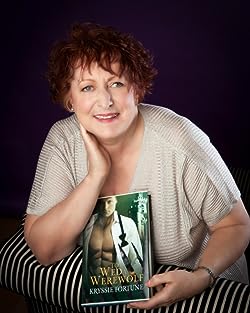 Kryssie Fortune writes the sort of hot sexy books she loves to read. If she can sneak a dragon into her paranormal books she will. Her paranormal heroes are muscular werewolves, arrogant Fae, or BDSM loving dragons. Kryssie likes her contemporary heroes ex-military and dominant. Her heroines are kick ass females who can hold their own against whatever life - or Kryssie - throws at them.Kryssie's pet hates are unhappy endings, and a series that end on a cliff hanger.Her books are all stand alone even when part of series. Plot always comes before sex, but when her heroines and heroes get together, the sex is explosive and explicit. One review called it downright sensual.