Battle for Love
By Valerie Bowes

Enter to win A $10 Roane Publishing Gift Card. Please use the Rafflecopter below to enter. 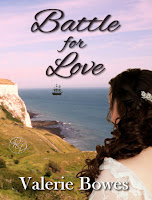 It’s not easy, being an unmarried woman in the England of 1814. But Nancy Worth will not marry where there is no love, and every man in her small Sussex village is either too old, too young, or has a face like a fish. Except for the handsome Bartholomew Boult, and he has his own reasons for pursuing her.

When, against all the odds,  Nancy does find love, both her family and his are determined to put a stop to it.  He is gentry, and she a farmer’s daughter. With lies and gossip flying, as well as the unexpected resumption of war, it seems everyone is trying to separate her from Will Carlton.

Nancy dragged the bonnet from her aching head and swung it by its ribbons, using it to dash intrusive sprays of vegetation out of her way. Wrapped in smothering thoughts, she did not hear the voices until she stepped out of the narrow way into the edge of a field.

Only a few yards away, Bartholomew Boult was speaking to one of his farmhands. He turned as Nancy appeared abruptly behind him and snapped a command. The farmhand slouched off with an interested glance over his shoulder.

Boult took a couple of steps towards her. “Miss Worth? May I be of assistance?”

Nancy blinked the angry tears from her eyes, her spine ram-rod straight. “I know my way, thank you, Mr Boult. I am quite all right.”

He came nearer. “Are you sure?”

He was too close for her comfort. She could smell the maleness of him and, despite her dislike of the man, her body betrayed her. Her belly fluttered and she was uneasily certain that he could feel the warmth that had flooded her loins.

He smiled, relishing her discomposure. His wager with Satterthwaite was as good as won. A ripe, juicy plum, ready to fall into his hand. The only question was whether she would fall without the prize of marriage. And whether it would be worth the brouhaha if she did, he thought cynically.

No harm in edging the matter along. He reached out a forefinger, set it under her chin and planted a kiss on her lips.

The next instant, his ears were ringing from the slap she dealt him.

“How dare you?” She was standing very upright, her eyes kindling with fury. “You forget yourself, sir.”

He rubbed his cheek ruefully, but a grin spread over his face. So she wasn’t the easy conquest he had thought. Better! Much better. This would provide some sport.

“I beg your forgiveness, but you must agree that some of the fault is yours. You have such damnably kissable lips.”

“Let me pass, if you please.” Nancy crammed the bonnet back onto her head. If she had remembered that this path touched on Boult’s land, she would have thought twice about coming this way on her own. She had not forgotten entirely the suspicion that had surfaced, so formless that it was like trying to catch a moonbeam in a jar. How had he known that she had been visiting Susan that day? But she was far too angry to be afraid.

“Come, Miss Worth, cry quits. Indeed, you have my sincere apologies. May I squire you back to Millcote, to make amends?”

“No, you may not.” Her thunderous face reinforced her words.

“I bow to your wishes. Believe me, I have no desire to put you out of countenance. And pray put my lapse of behaviour out of your mind. It shall not happen again.”

Sincerity, that’s the dandy. Let her think she’s got the better of me. I’ll wager she ain’t been kissed before. Give her time, and she’ll want more.

It was all Nancy could do not to run, but she kept her head up and walked steadily away down the path. Once she was sure he was not following her, she stopped to scrub at her lips, but she could still taste him.

She was uncomfortably aware of the flash of desire that had swept over her, but he could not have known of her feelings, could he? Moistening her handkerchief at her lips, she scrubbed harder. Surely, she could have these yearnings only for the man who engaged her affections? It was what everybody said happened. And she did not like Bartholomew Boult one little bit.

Water. She needed to wash his touch away with the cleanliness of water. There was a stream a little further on. She could dip her handkerchief in that. But when she came to the banks of the brook, Will Carlton was sitting there with his back towards her and his sketchpad on his knee.

ABOUT THE AUTHOR:
I always wanted to work with animals, although I was strongly attracted to drama and flirted for a while with the idea of trying for a Drama College. But the animals won, and I became a nurse at the Blue Cross Animal Hospital.

I’d been there seven years when the hospital had central heating put in. I married the engineer and spent the next twenty-seven years driving a truck known as the Flying Pig around the building-sites of London, loaded to the gunnels with boiler sections, copper tube and the occasional smelly contents of a grease-trap.

When we stopped the installation side, there were no longer fitters waiting impatiently for my truck and me. For a while I acted as part-time secretary/book-keeper/maker of tea, but seized the opportunity to pursue my love of writing.

Do you remember ‘composition’ when you were at school? That was my favourite thing, apart from history. Even when I was driving The Pig, stories would come into my mind and I couldn’t wait to get back and write them down. Walking Polly the English Bull Terrier helps (she goes at two miles a fortnight!), as does running through our lovely Surrey countryside.

LINKS:
Website: http://www.valeriebowes.com
a Rafflecopter giveaway
Open only to those who can legally enter, receive and use a RoanePublishing.com Gift Code.  No purchase necessary, but you must be 18 or older to enter. The winner will be chosen by rafflecopter, and announced on the widget. Winner well be notified by emailed and have 48 hours to respond or a new winner will be chosen. The number of entries received determines the odds of winning. This giveaway was organized by Roane Publishing's marketing department.
Posted by Reviews By Crystal at 12:00 AM

Email ThisBlogThis!Share to TwitterShare to FacebookShare to Pinterest
Labels: @RoanePublishing