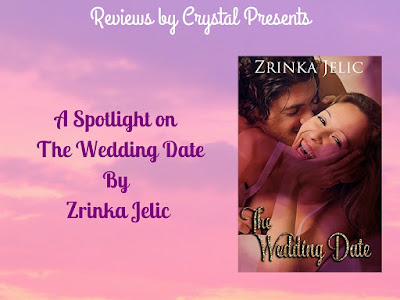 The Wedding Date
By Zrinka Jelic

Crystal: Today I have the pleasure of hosting By Zrinka Jelic. Welcome Zrinka! I'm so excited to have you here today.  Would you share a little bit  about yourself with us today?

Zrinka: I was born and raised in what’s today Republic of Croatia, or in my days, Yugoslavia, but for the past 28 years I’ve called Canada my home. At one point I’ve considered to spend my retirement in Croatia, due to mild winters and dry, sunny summers, but after two visits during the summer, I’ve come to the conclusion that I couldn’t adjust to that life anymore. The summers have turned from hot to scorching and not even soaking in the sea can bring much needed relief. The sea temperature has risen to the point that some fish and other marine species simply disappeared. And the Adriatic Sea is considered one of the cleanest seas in the world.

Zrinka: I’ve started on a story that originally came to me as a contemporary romance, with some light paranormal elements. But since I’ve written my first rom-com “The Wedding Date”, and so much fun I had writing it, I’ve decided to stay with that sub-genre. So I’m trying to infuse as much humor into my current wip as I can, but I’m finding it not so easy since the story’s concept wasn’t meant for a comedy.

Zrinka: The idea for “The Wedding Date” came after I’ve written a suspense romance titled “Dangerous Benevolence” (originally published as “Gypsy Stone”). The story is heavy and sad, but with a happy ending, of course, so I needed something to cheer me up, to pull me out of the deep mood I’ve fallen under after I’ve written the end to the “Dangerous Benevolence”, it’s coming out again by Wild Rose Press, don’t have a publication date yet.

Zrinka: Not really, I find munching distracts me from writing, so unless you count coffee as a snack, I don’t have one. I much rather listen to the music and it’s funny how each story picks its own tunes.

Zrinka: I’m into yoga and generally working out, trying new things and hanging out with my kids and family.

Crystal:  Do you have a favorite background noise you like to having going on while you write (TV, Music, kids playing)?

Zrinka: As I said above, I like to listen to the music, but finding songs with lyrics distracting, so it would have to be just melody, like orchestra or something, and not the well-known tunes or I’ll start singing along. And if it does have words, than it would have to be in a language I don’t speak or understand a word of it.

Zrinka: It’s been pleasure to visit your blog. It’s always exciting to reach out to new readers.

Nerissa (Neri) Runic, in her late thirties is deemed unmarriageable by her family. So she fabricated a story about dating Mark Warren, a sexy doctor and the gym owner she's been ogling for months. She thinks none of her lies will come back to haunt her. When her mother RSVP s to the cousin's wedding invitation on her behalf including a Plus One, Neri has no choice but to attend...or come clean and face her family's scrutiny.
Frustrated with everyone trying to fix him up on a blind date, Mark Warren lied about dating an elusive redheaded member of his gym who caught his eye months ago. Only, he fully intends to turn this lie into truth. Once he musters enough courage to approach her, that is.
With hardly a month before his cousin's wedding, he hopes his mother would reply to the invitation, declining his attendance. But getting out of this obligation is out of question. She expects him to reply with ‘happy to attend with a guest’.
When they find out they are forced to attend the same wedding, Mark and Neri must practice their 'relationship' in an effort to fool their families into thinking they are a real couple.
But the thin line between pretending and the real deal is easily crossed. 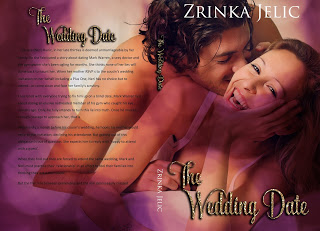 Zrinka Jelic lives in Ontario, Canada. A member of the Romance Writers of America and its chapter Fantasy Futuristic &Paranormal, as well as Savvy Authors, she writes contemporary fiction--which leans toward the paranormal--and adds a pinch of history. Her characters come from all walks of life, and although she prefers red, romance comes in many colors. Given Jelic's love for her native Croatia and the Adriatic Sea, her characters usually find themselves dealing with a fair amount of sunshine, but that's about the only break they get.
Author Links: