#GiveAway - Nothing Special V By A.E. Via 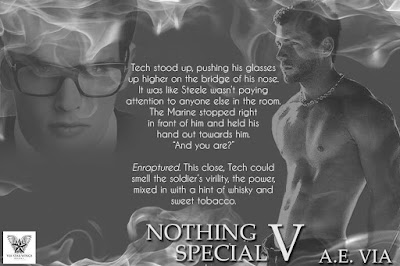 Nothing Special V
By A.E. Via

The boys are back and fiercer than ever!

Atlanta's notorious narcotics task force is at it again. They are stronger, bigger, and better than ever. Especially when a city councilman sends RECON Marine, Edwin Steele - who’s been blacklisted from his Oakland department - to join the team. God and Day weren't recruiting. They have a lot on their plates, like the fact they're supposed to be getting married soon. They don't have the time or the patience to integrate a decorated war hero with a slight chip on his shoulder into their well-oiled machine.


A hothead that's uncontrollable and terrible with authority… but wasn’t that their team motto?

Steele was ready to hang up his shield. He was done fighting with bigoted bastards that couldn't respect the job. He was good at fighting; he just needed the right team to fight with. When his uncle - City Councilman, Rasmus Steele - shows him a video of God's team in action, he knows right away, it's where his nephew belongs in order to restore his faith.

Steele pointed to the driver, a behemoth of a man wielding those massive firearms like a true beast… like a soldier. “And him. Who the hell is he?”

Steele was skeptical about his new placement, but when he meets God's technology specialist/computer genius, “Tech,” he's willing to give it his all, and he definitely shows and proves.

Tech is stunning. His sweater vest and khakis, a stark contrast to the blue-jeaned roughnecks he works with. A beautiful sheep amongst the wolves. Steel thinks there's no way the brilliant man would be interested in a hardhead like him, but Tech has a few badass hidden talents of his own and manages to surprise him... surprise all of them.

This story is a part of a series but can stand alone. It does not end on a cliffhanger and has a HEA. There are no multiple pairings in this novel. 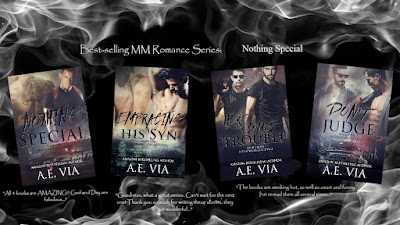 “Ramos had a family. A husband, children, aunts, uncles, nieces, and nephews who loved him. Now he’s gone. Why? Because he chose to have a husband instead of a goddamn wife. He was a good cop. He didn’t deserve it.”
“That type of hate is never deserved, vennapoeg. But I can’t have you blaming yourself for it all. He was off duty. He tried to stop a store robbery. He lost his life, but he saved two others before he did. He did his job, and it wasn’t your fault, Edwin.”
“I’m still done,” Steele repeated. He wasn’t sure if he was trying to convince his uncle or still trying to convince himself.
“Oh, you’re far from done. Joseph told me what you did when he was pulling up to get you. Your instincts, your reactions, your need to do good is in here, vennapoeg.” His uncle held his shoulder and placed his other hand over his heart. “There’s no quitting in here. There’s no quitting who you are. You’ll fight until your last breath, and that’s a long time from now. What do you think you’re going to do without your shield or a platoon? Become a Walmart greeter? Or become an alcoholic?”
His uncle’s gray eyes hardened and blazed with anger, his voice a menacing snarl. “Drowning yourself in the bottom of a bottle is beneath you. You will not disgrace your father… my brother. I won’t allow it. You are not tired, you’re not weak. It’s impossible,” he hissed, close to Steele’s face. “Your last name is Raud. Iron… steel. You think your great grandfather changed the meaning of our family surname… he only translated it to English. You are unbreakable. And I demand you act like it.”
Steele didn’t speak. His uncle was right. He’d let hurt and injustice control his actions. 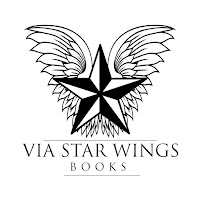 A.E. Via is an author in the beautiful gay romance genre and also founder and owner of Via Star Wings Books. Her writing embodies everything from hopelessly romantic to adventure, to scandalous. Her stories often include intriguing edges and twists that take readers to new, thought-provoking depths.
When she’s not clicking away at her laptop, she devotes herself to her family—a husband and four children. Adrienne Via has tons of more stories to tell, but she really would like to hear yours. Via Star Wings Books is currently accepting submissions for established and aspiring LGBTQ authors.
Visit my site to learn more! Go to A.E. Via’s official website http://authoraevia.com  for more detailed information on how to contact her, follow her, or a sneak peak on upcoming work, free reads, VSWB submissions, and where she’ll appear next

Email ThisBlogThis!Share to TwitterShare to FacebookShare to Pinterest
Labels: @AuthorAEVia