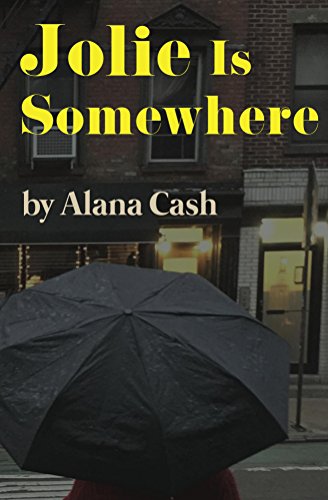 Jolie Is Somewhere
By Alana Cash

Crystal: Today I have the pleasure of hosting Alana Cash. Welcome Alana! I'm so thrilled to have you here today! Would you share a little bit about yourself with us today?

Alana: The book that I have just released, JOLIE IS SOMEWHERE, is set in New York City, which I think is possibly the most interesting city in the world.  It's filled with interesting people, architecture, history, and entertainment.  This is what I write about on my blog:   http://4yearsinbrooklyn.blogspot.com/.

Crystal: What are you currently working on?
Alana:  Currently, I write the blog and I am also working on a series of short stories about, "Dalton," a man who lives in Queens and has "issues."  The stories are really fun to write and I draw on my own life and the lives of my friends and people I observe to create Dalton's life.

The story is about a naive young woman who moves to Manhattan from Oklahoma City.  She's very pretty and gets cast in a TV commercial and the night she goes out to celebrate that with her roommate, she ends up getting arrested for something she didn't do.  She spends 8 months in jail at Rikers Island where another inmate smashes her face against a concrete wall, twice.  That broken nose is one of the themes of the book.  (We all have something broken or that we think is broken forever).

The inspiration for the story was that I was working with a homicide detective on writing a book (that never got completed) and I sat in on a trial of three young men who were in a 45-second fight and were sentenced to 15 years in prison.  I tried to imagine what that would be like - to lose your entire youth.  And, on top of that, the detective that I was working with had 2 or 3 of his murder conviction cases overturned on account of the people were innocent. So there again, is a link to the story. Imagine losing all that time for something you didn't do.

I thought that 8 months was about enough time to wreck your mind and change your outlook on life.  Jolie gets release from jail into a snowstorm wearing a summer dress, high heels, no coat, a dead cell phone and $43.  It gets better, I promise.

Alana: I generally write in cafes.  When I'm writing, I like to drink cappuccino and dip biscotti into it.

Crystal:  Do you have a favorite scene you would like to share with us?
Alana:  One of my favorite scenes is when Jolie sees her ex-roommate, Electra, one morning on the sidewalk.  Electra is drunk and about to be evicted from her apartment because she was running an illegal B&B in a rent-controlled apartment building in Manhattan.  Electra had refused to let Jolie even spend one night in her old apartment after she got out of jail, so there's some divine retribution in Electra's eviction.  This is where Jolie begins to understand why you don't really ever need to take revenge.

Alana:  I like to cook.  Every week, I make bread, homemade ice cream, and cocoa brownies.  I make lemon meringue pies with organic lemons I find have dropped from my neighbors trees.  I make soup, souffle, quiche, humus, shrimp au gratin, and my own Caesar salad dressing.  I like to experiment with recipes from different nationalities.
Crystal: Do you have a favorite background noise you like to having going while you write (TV, Music, kids playing)?

Alana: I like to have rhythmic music playing.
Crystal: Thanks for visiting. It has been a pleasure having you visit today. Can you think of anything else you would like to share with us today?
Alana: Yes.  I read that studies have been done about "acts of kindness" and it was found that the people observing an act of kindness are more affected than even the person receiving the act or the person performing an act of kindness.
Do something kind every time you think of it and you can change the world.

Jolie has a list. There are 4 names on it. How can she take revenge on the cop who put her in jail for something she didn't do, the roommate who could have saved her and didn't, the inmate who smashed her face against a jailhouse wall, or the high-priced attorney who did nothing for her?
Maybe she doesn't have to.

Jolie is released from Rikers Island into a blizzard wearing the summer dress she was arrested in. She has $43, a dead cellphone, and nowhere to go. She didn't commit a crime and she doesn't know why she was released from jail without a trial. What she does know is that she's lost her job, her apartment, her family, her friends, and her hope to ever be cast in another television commercial. While she was in jail, an inmate broke Jolie's nose. It all happened to a naive girl from Oklahoma who feels really lost in that snowstorm.

It can't get worse, really. But it can get better. Just when you think you are all alone in this world, you find out you're not. There are people all around waiting for someone to accept their kindness and Jolie finds that out. At her worst moment, Jolie finds refuge and meets Madame Budska, aka Lina Sandor. a "psychic" who takes an interest in Jolie and what happens to her.

It doesn't happen overnight. Jolie struggles with neurotic fears as well as thoughts of revenge, but she learns from Lina and from experience that revenge just isn't necessary. Jolie finds her life again, a life she will live with her eyes open. 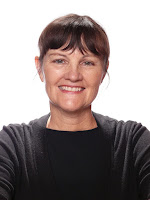 Multiple award-winning author & filmmaker Alana Cash is an adventurer. She trekked alone through war-torn Serbia and slept in a KGB interrogation room in Prague. She's been to a gypsy fair in England, a bullfight in Laredo, and parasailing in Acapulco. She wore a bulletproof vest on a ride-along in a New York City patrol car and kissed a man inside the Norman Bates Psycho house at Universal Studios.

Connect on Facebook: https://www.facebook.com/alana.cash1
Posted by Reviews By Crystal at 1:00 AM