Can Jessie work with a woman with the looks of a pixie and the personality of a dragon to complete the most important task of her career?
Shop-fitter Jessie is sent to London’s Oxford Street to work on a flagship store’s front window overnight. It’s the first time she’s completed such an important task by herself, but the plans and organisation are solid—it’s just a case of getting it turned around before the store re-opens the following morning. What she’s not betting on, however, is the woman in charge of the project—Edith. She has the looks of a pixie but the personality of a dragon, and it soon becomes clear to Jessie that the job isn’t going to be plain sailing, not with Edith being awkward and putting Jessie down at every turn. As the hours drag on, Jessie somehow manages to peer beneath Edith’s frosty exterior, and much to her surprise, she kind of likes what she finds. But will she abandon her principles—and potentially risk her job—for a one-off thing?

With a sigh of relief, I followed the satnav’s instructions and indicated right, swinging the van into the side road off of London’s Oxford Street.
“You have reached your destination,” remarked the posh voice coming from the machine.
“Thank fuck for that,” I shot back, removing the device from the windscreen and wiping at the tell-tale ring it left behind on the glass with my sleeve, hoping to remove any temptation for potential thieves. No doubt they swarmed around this area, tourist Mecca as it was. I didn’t want them to catch me out.
I stowed away the satnav, switched off the van’s ignition, and grabbed all my stuff. Hopping out onto the road, I locked the van and pocketed the keys. Then, wiping my damp palms on my black work trousers, I approached the rear door of the shop where I was to work.
Come on, get a grip, Jessie! You may be new at this, but you know what you’re doing. You’ve got this.
I wasn’t totally insane to be nervous. I’d been working for the shop-fitting company for just over a year now, and it was great. I really enjoyed the work, the variety. But this was the first time I’d been sent out on a job by myself. It hadn’t been intentional, either—the job was last minute, and the client had made it worth my employer’s while. Normally there’d been a team of two coming here, but there was another big job, one that needed the more experienced fitters on board. Therefore I’d been pulled off that task, in order to do this one. Alone.
Adding more worry was the warning one of my colleagues had given me on finding out where I was being sent. “You watch out for that Edith woman, Jessie. She may look like a pixie, but she’s actually more of a dragon. She frightens the bloody life out of me.”
The warning ringing in my ears, I took a deep breath and pressed the doorbell. I could do this. I could. I’d made it all the way from Leeds to London, navigating busy motorways and the complete insanity that was England’s capital city, venturing right into the heart—the craziest of the crazy. Fortunately, by the time I’d hit the West End, the traffic wasn’t too bad, given that the shops were closing and rush hour had been and gone. There were still morons galore, naturally—honking taxi drivers, swerving, lane-hopping cyclists, oblivious rickshaw drivers, suicidal pedestrians—but I’d kept my cool throughout, telling myself I was so close to the end of my journey that I could almost touch it. Taste it.
And here I was, at the back entrance of the flagship store of the world-famous fashion chain, ready to change over its window display in time for when the shop reopened in the morning. I glanced at my watch, relaxed a little. It was ten p.m. Eleven whole hours until opening time. No problem, not even for a relative newbie like me.
The door opened a crack and a sliver of a dark face peered out at me. “Yes?”
“Oh, hi. I’m Jessie—from the shop-fitters? Here to work on your window display?”
The woman—the voice had given it away, as she was still peering through the crack between the door and its frame—eyed me up. The black trousers, black T-shirt, black fleece—the latter two bearing the name of the company I worked for, clearly weren’t enough. Turning her attention to the van behind me—emblazoned with the company name in huge letters—she now seemed convinced.
“All right,” she said, opening the door wider and stepping back to let me through. “Come on in.”
“Thanks…”
“I’m Jacqueline. Edith’s already in the window. She’s the one in charge.”
I nodded. “Okay—lead the way.” I followed Jacqueline through the dimly lit storeroom. I’d known instantly she wasn’t Edith, because she looked nothing like a pixie. More like a goddess. She had a curly black afro, curves you could lose yourself in for days, and a wiggle that would have turned me instantly if I wasn’t already into women.
Blinking as we emerged into the blazing lights of the shop floor, I continued in Jacqueline’s wake, adjusting my ponytail and fixing a smile on my face as we grew closer to the window…and Edith. She was the big cheese—when it came to the window design and execution, anyway—so I needed to make a good impression. Hopefully she’d give good feedback to my boss, and I’d get more projects like this in future. Maybe even a raise—a girl could dream, right?
“Hi,” I said as we came within a couple of paces of my soon-to-be workspace. “I’m Jessie. Pleased to meet you.”
After a brief pause, the pixie took the hand I was holding out and shook it. Firm, confident, but brief. She was no-nonsense, this woman. But I’d known that already. 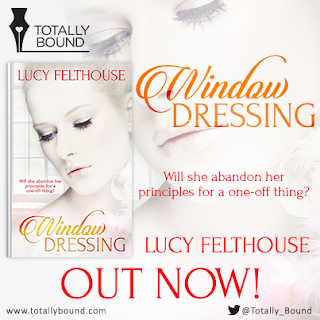